This is a suggestion for adjusting the Daedric helms to be a bit more distinct from each other and closer to their intended implementation in Morrowind concept art. 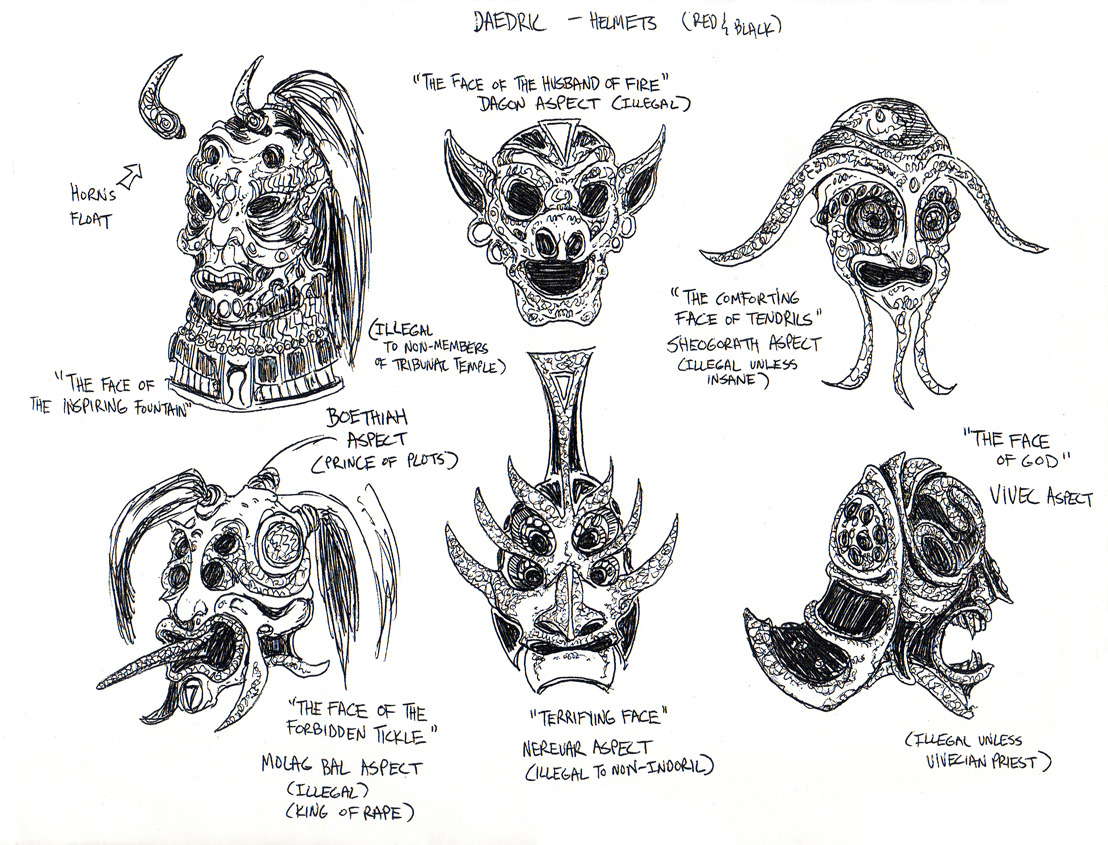 One part of the suggestion is adjusting the stats of the helms in Tamriel_Data to be more distinct. I attached a list of suggested stats below.

The other is to attach modified OrdinatorUniform scripts to the Tamriel_Data helms making them illegal to wear. Specifically, the Face of Rebellion (Mehrunes Dagon) and Face of Humiliation (Molag Bal) would be straight-up illegal to wear, the (as-yet unmade) Face of Aberration (Malacath) would be illegal to native Dunmer, so only legal to outlanders, meaning it would effectively be legal for the player to wear. (Unless, perhaps, the player has joined the Tribunal Temple).

The Face of Consolation (Sheogorath) is legal for the insane to wear, which leaves room for some interesting conditions: the player can wear the helm without trouble with a willpower of 15 or less. As the lowest starting willpower is 30, this would require the player's willpower to specifically be damaged to use. The player might also be able to legally wear the helm if they experience disturbing dreams, as the Temple sees those as a mark of insanity, but before being outlawed anyway as false incarnate.

To that end, some suggested lines, which should probably be conditioned to Dunmer guards not belonging to House Dres or Telvanni:
For the Face of Rebellion and the Face of Humiliation:
"I do not know how you got hold of that evil helm, outlander, but it is illegal to wear. I will grant you mercy as you are ignorant, but if you are caught wearing it again you shall face justice."
For the Face of Consolation if the player has >15 willpower:
"Wearing that helm is prohibited to all but the particularly weak-willed, outlander. You may be ignorant, but you are not insane; cease wearing it or you shall face justice."
If Journal A1_Dreams >= 1 and A2_6_Incarnate < 50 a copy of that entry will take priority that has the following result:
Choice "I have experienced disturbing dreams." 1 "I will keep that in mind." 2
Choice 1: "Ah, carry on then. Wait a moment, has this already been reported?" goodbye
Choice 2: "Very well then."