I still plan to add a bit of colour to the illustrations to make them a bit clearer, but unwisely wanted to get this posted 'today'.

There are two reasons I'm making this thread now: I've noticed that several good concepts and assets intended (or that I think could be suited) for Redoran lands have popped up over time, and think it would be a good idea to deposit them in a central location so that we won't have to search for them later; and because I think we shouldn't work on the Redoran exterior any time soon.
Basically I want it to be very clear that, as a conceptualization thread, all that is important here is how well suggestions align with the concept of House Redoran, not our implementation of House Redoran. Think West Gash and the area around Baan Malur should be redone as ashlands? Think Baan Malur should be a city on a plain with an acropolis? Think Redoran further west should have a different culture with different clothing and architecture? As long as justification is given as to how that would make for a better representation of House Redoran, they're all fair game.
I think we tend to focus on implementation first and allignment to concept afterwards. An example that springs to mind: making changes to Vvardenfell. Years have been spent discussing whether we should be able to make changes to Vvardenfell but we still have only the vaguest ideas of what changes we would actually want to make. The approach certainly has its benefits, but I think it has the effect of limiting our creative vision very drastically.
The intent of this subforum is simply to switch the order of operations: allignment to concept first, implementation afterwards. As is the case now, just because a concept passes through the first hoop doesn't mean it will pass through the second, so this isn't opening the floodgates to wild revisions like those described above. The hope is that it will create a broader pool from which to pull our ideas; to provide our world with a sense of greater depth, even where actual implementation falls short due to compromises. It is intended to stop implementation-minded people from instantly shooting down interesting concepts because they are impractical to implement, but also to stop conceptually-minded people from limiting their vision in the hopes that their ideas will be more easily accepted that way.

Having gotten that lengthy preample out of the way, then, I might as well get down to it. Grey Meadows is absent because its current implementation aligns pretty perfectly with my concept for it so I might as well save us all the time, and I don't really have much to add conceptually as far as the Armun Ashlands and Roth-Roryn are concerned at the moment. The snowfall of the Velothis covers layers of ashfall from Red Mountain that have darkened the rocks. The region is not without its own geothermal activity, with many deep gashes on the craggy slopes of the mountains which emit whisps of smoke. Vegetation is limited: short, hardy grasses poking their way between dark pebbles, generally a pale grey-brown in hue, and the occasional copse of smallish woody plants huddling together in a corner. The region is not inhospitable, though, if one knows where to look, and is home to a variety of wildlife. The region is virtually free from permanent settlement, aside from the passes, but Redoran patrols are common, and despite their efforts the many nooks and crannies of the region are home to every description of vagrant. As the name suggests, this region is a moor which rises erratically from the coast up to the Velothis, and given the dull red-brown or umber colour of the region the variety of hardy vegetation that creeps up with it is, perhaps, surprising. These are the primary herding grounds of the hoom, though many of the creatures of the Velothis also find a home here, and on the lower slopes a few of the crab-creatures of the coast as well. Only the borders of the region see significant settlement: in the interior, one will find only the occasional herders' huts and patrol camps. The relatively mild and flat coastal region of Julan-Shar contains a cheerful array of flora – including heather – and a variety of woody plants and several natural hotsprings, though its jagged appearance and resident crab-creatures can make the region appear foreboding to travellers. They would not be wholly mistaken; the milder climate also attracts less savoury characters, both man and beast, though the Redoran mostly keep them in check. The Redoran have proved less able – willing though they are – to keep outlanders in check, and the region is popular both to the local Nords, who have settled the region since the days of the First Empire, and Imperials. Egg mines and Velothi cave dwellings are a common sight as well. Uld Vraech is mostly a barren region with neither plant nor animal, though a few plants do hold out in the region's many depressions and a few creatures are adept at stalking its frozen wastes. The landscape is very angular, with countless plateaus upon plateaus, culminating in the rock eyries that stand guard over the landscape. Ice is also a common sight, most notably the seasonal rivers which fill with water for part of the year and then leave an empty husk of ice behind for the rest of the year. Nordic ruins are scattered throughout the region, and the region holds great significance to the Nords – to whom the natural features of the region carry names such as Kyne's eyries, ice snakes and Shor’s rattling ribs – even though it has been most unkind to them. Settlements in the region nestle deep in the depressions like the vegetation, and the locals rely on hoom-drawn sleds to travel between them. Found in all regions north of Roth-Roryn, especially Uld Vraech. Found mainly in Julan-shar, rarely in the Grey Meadows and Velothi Mountains.

Around the edges of Grey Meadows.

Might work better elsewhere, but works for the Clambering Moor. 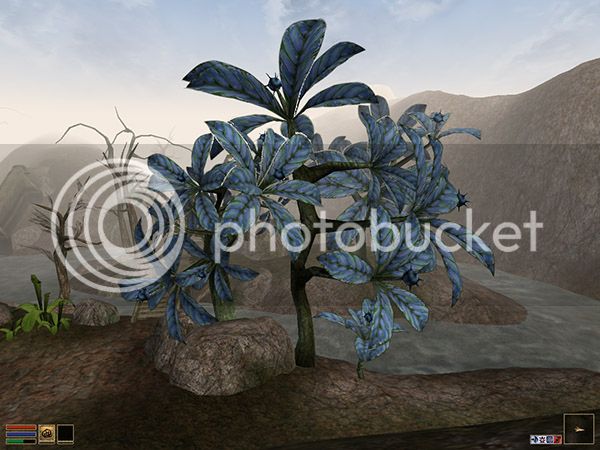 This one’s a bit of a long-shot and could perhaps be used better elsewhere, but if the palette were changed and the leaves replaced by a needley alpha – and the whole think made a bit smaller – I could see this working quite nicely as a tree in Julan-Shar, the Clambering Moor, Roth-Roryn or even sparingly in any milder pockets of the Velothi Mountains.

Ah, this is a very good Idea, and great landscape concepts Gnomey! Shoudn’t there also be an Indoril concept-thread then? And maybe a very low-priority Telvanni thread? I think that would be great for compairing and maybe if a good concept turns out not to be suited for Redoran, but would actually fit in with the Indoril, we just can move it over there and it doesn’t get as quickly lost to time.

Yeah, Mournhold District, Telvannis District and Narsis District threads would make sense as well. (Maybe even a Deshaan District thread to discuss the Dres regions we haven’t gotten to yet). Of those three, however, I’d personally only really consider creating the Narsis District thread for the time being. Mournhold and Telvannis threads have simply seen far more heated and controvertial discussion in the past, and I want to be absolutely sure that people (myself included) have gotten used to the disconnect between conceptual proposals and implementation proposals before I open pandora’s box again.

And keep in mind that priority has nothing to do with these threads; I actually think they will tend to work better the more disconnected they are from implementation, which would technically make Telvannis a great district to discuss if the ghost of implementation didn’t spook people whenever Telvannis is mentioned. The idea of this subforum is simply to gather ideas and let them germinate, so that we will have a good variety of in-depth ideas to choose from come implementation time.

Ah I see. A subforum to go crazy with ideas without having to worry about implementation, I like it.

Yeah it is sometimes hard to let a concept just be a concept and not already an actual blueprint for implementation.

Found this pic on the Nexus: http://imgur.com/uvw4GJC