The Roth-Roryn Queue  and the Ascadian Bluffs Queue contain links to the development meetings where the future of the section was hashed out.

Considerably most pressing are exteriors for the interior claims which have been finished (for Roth-Roryn a map and details can be found here), and replacing the dirt road that crosses through the Ascadian Bluffs with a main road texture. The Ascadian Bluffs are - sparse as they are - by and large finished.

Of secondary interests are working on implementing the Orc vampire clan in Roth-Roryn and reviewing and fixing some caspering from the landscape overhaul.

Merged the cells I cut from RestExterior. 3 caves and un-Nemonified AA-RR border section and RR area are now in the file.

Random bugs: (Not the gospel! Some are probably wrong, and some are border issues currently unfixable.)

[EDIT: Removed. Most of them are fixed now; for the rest, see the TODO in one of my comments further below.]

Early-game balancing: Don't leave that good stuff around in unguarded crates. Food, iron/chitin, cheap books, etc. is fine, cheap health potions are actually quite useful (DB assassins), but no steel armor for example at least up until Andothren.

[EDIT: Removed, since all fixed.]

And I guess I'm doing that, Grabbing.

Whoops, that last one was for Andothren, commenting there with it.

Claiming to add a small Redoran outpost south of Kartur to overwatch the border area.

The Menaan interior "Orzuk gro-Gum: Smith" has a door that leads to the basement which currently bleeds trough the crates when it opens. It is also a bit akward trying to go through it. If possible the crates should be removed.

Also, Novor Dal's house has a big step you need to make to get inside. Maybe try adding a staircase?

Grabbing the file again to fix some bugs in Bodrem and to merge and place some additional ints.

Can you also clean the dirty Kartur cells in the file? Basically just empty landscape where Kartur is.

Thanks! I've uploaded a fixed version without the Mainland dependency.

- Merged https://www.tamrielrebuilt.org/claims/roth-roryn-velothi-dwelling-5 , replacing two of the critters (a scrib and a kwama forager) by static levlists (= making them respawn).

- Merged https://www.tamrielrebuilt.org/claims/roth-roryn-velothi-dwelling-6 . Did not add a fire outside as per the int's author; leaving this to someone who is good at ext work.

- Deleted Orgnum-Coffer-related greetings and the coffer itself. They all appear in the Data Addon since Nov 1, and apparently are correct there and wrong here.

- Deleted MISC tr_key_m4-450_shipwreck01, LAND (-9, -14) and LEVI tr_m4_random_spellbook_gz; these objects all appear in the Kartur file, where they are actually used.

- Deleted various other common crap (I've ran "tes3cmd common" with all the other section files I have). The only one I'm not 100% sure about is BOOK tr_sc_writ_molvar, which is an Imperial writ of arrest against a traitor named Molvar Carbo. It appears in RestExterior in an unlinked int named "tr_i4-122, building 56, apartment 3", which sounds like a much larger city than we have anywhere in Roth Roryn (but I can't find it in Andothren or Kartur either).

- Int cell Yansurashmi is now entered from the Armun Ashlands (-1, -23). Also, critters in that cell have been replaced by static levlists.

- Merged [i4-317](https://www.tamrielrebuilt.org/old_forum/viewtopic.php?t=22494) and placed it with a semi-hidden entrance in (-2, -23). Did NOT NPC it, so let me copy Jule's NPCing notes: "Don't forget to add the ornadas (not a lot though, a queen in the small alcove where the nests are and maybe one or two more), as they are the primary source of food (and perhaps income). Water height has deliberately been set to a level that allows the inhabitants to traverse the whole river to the waterfall by boat, which allows for quicker resupplying. No traces of human activity in the first part of the cave since the inhabitants don't want to be disturbed. There's also a small area dedicated to meditation and prayer. There are places where you'll have to crawl or jump in order to go further, and there are also places you won't be able to leave without jump or levitation once you get stuck (this is intentional, caves don't tend to be user-friendly in RL). Throw in some slaughterfish, too, especially in the deeper parts of the river near the settlement, and some rats in the dry parts of the cave. Place for four people: shack 1 houses a handyman, shack 2 houses a female commoner or healer, shack 3 has place for two, one of them is a former warrior." Note that very few players will find the shacks and their inhabitants as-is. My suggestion is to have a quest leading here, perhaps starting in that Hlaalu border post TR_i4-334 (e.g., the border post has been broken into and they've seen some shadows disappear into this cave after that). Whoever lives in this cave is being extremely good at hiding, so they should have a really good reason (Morag Tong writ, or DB target, or some province's "enemy of the people").

- Fixed the pertinent parts of https://www.tamriel-rebuilt.org/bugtracker/references-standard-objects-m... .

- Removed topic "suspicious-looking fellows", which belongs to a quest that isn't in the file (it used to be in Hlaalu-Thirr, but has been removed from there too). For the sake of completeness, here is the topic in a separate ESP: https://drive.google.com/open?id=1qyMMr6koAYuGuqI5ZDhircDZo7RRsxDo  I must say I like the word "n'chow" a lot, but other than that I'm not too excited about that quest (generic "plantation owner is being harrassed by Camonna Tong thugs").

Fixed the casping errors and lack of detailing.

Work nearly done on the ATRRAA mountain range. Must be tested with the other two recent Nemon files.
(Roth, Armun and HlaaluThirr)

Done with the ATRRAA mountain range. Checking back in. Minor fixes done to some ext errors found here and there while in the CS.

Quickly grabbing this after all to toss out one cell which is sticking out to add to the Hlaalu-Thirr file. No interiors or NPCs or anything in the cell, so a simple job. I might also add a skylight to the Olruhk mine as discussed before while I'm at it. Should be done within the hour.

Dropping again. The implementation is rather bare-bones, but certainly pulls off the effect I wanted. The top of the plateau could probably use some detailing and perhaps hidden goodies and such; I have added a pathgrid to part of it, as well as to the mines themselves. 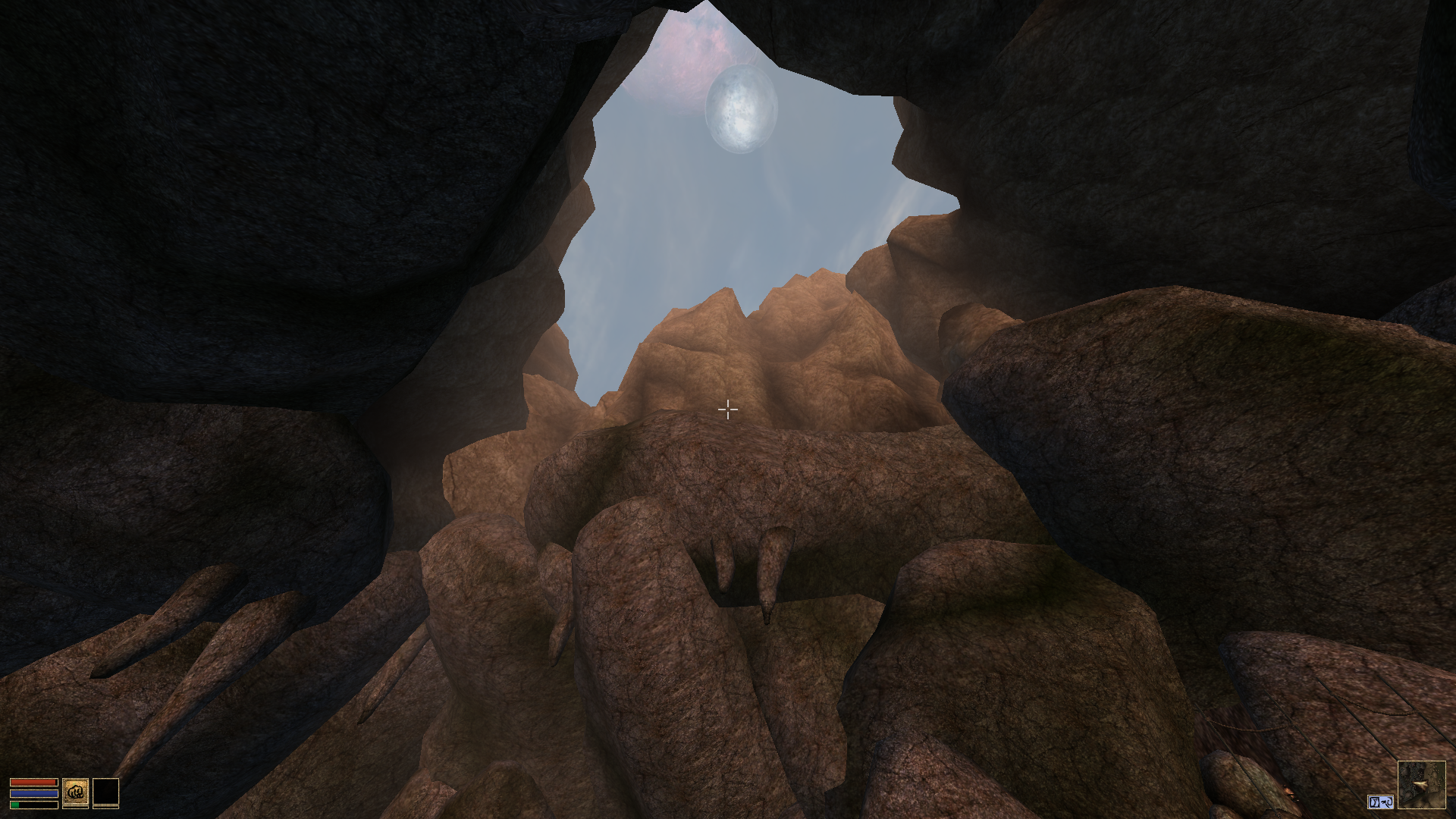 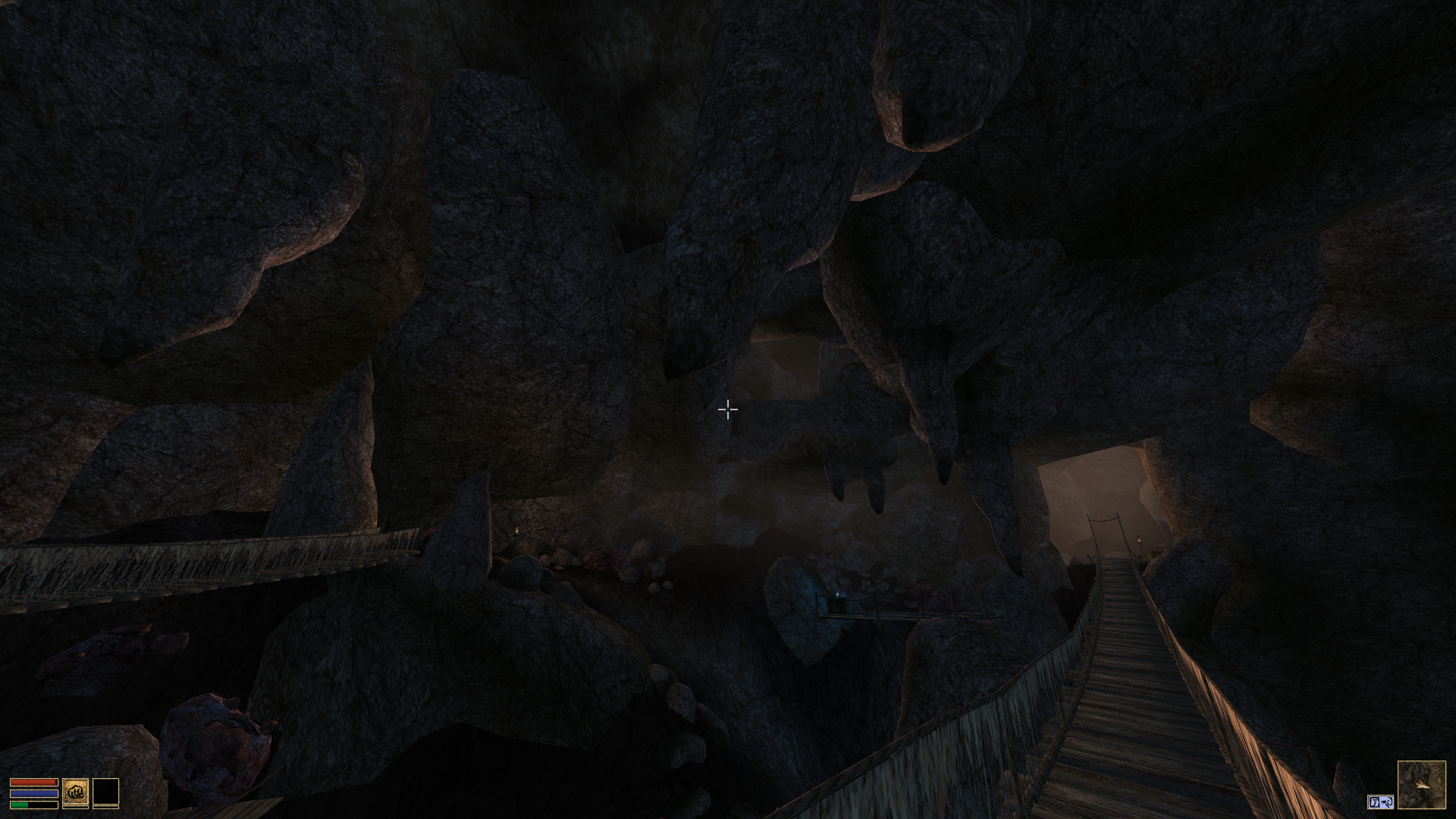 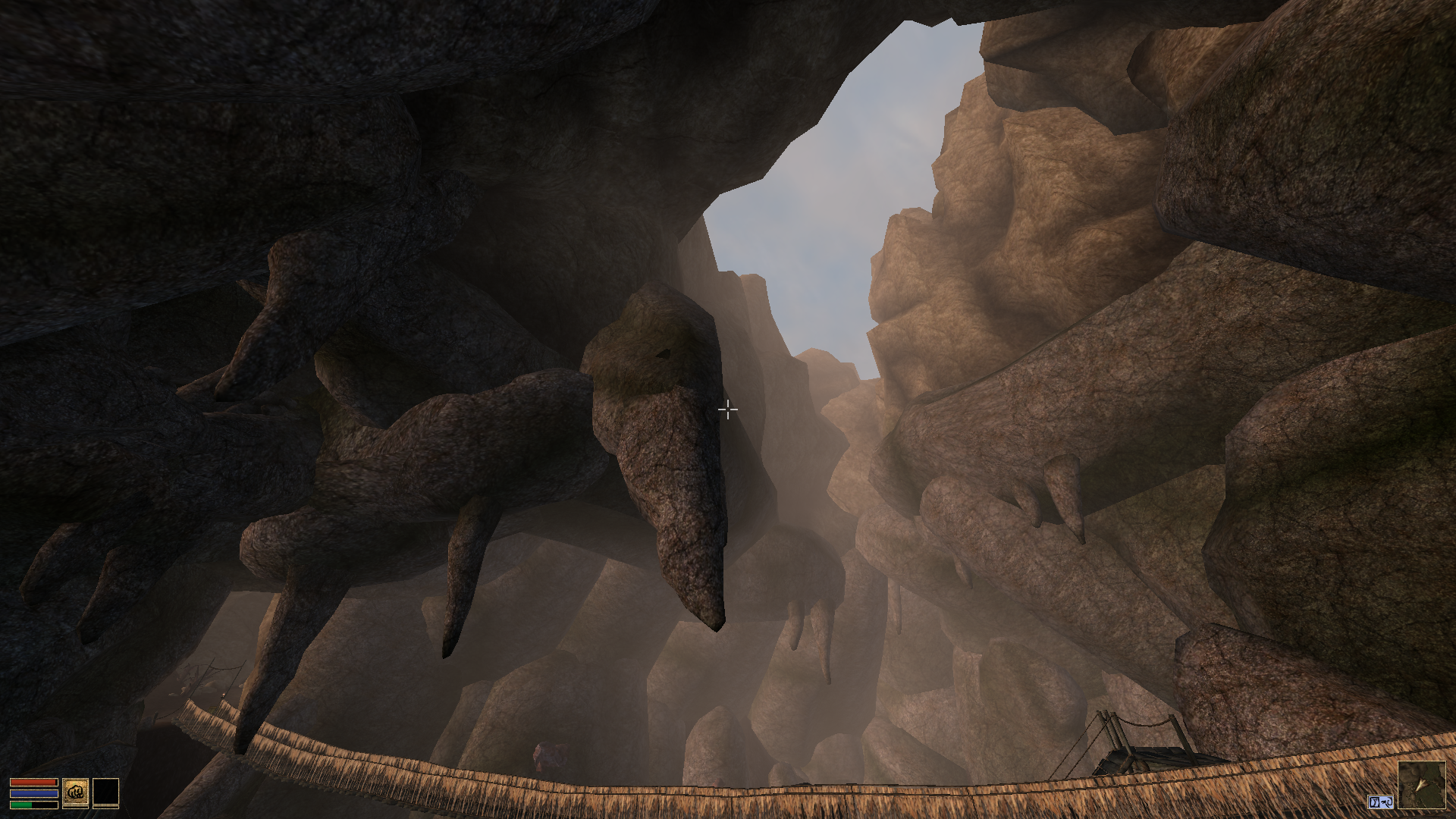 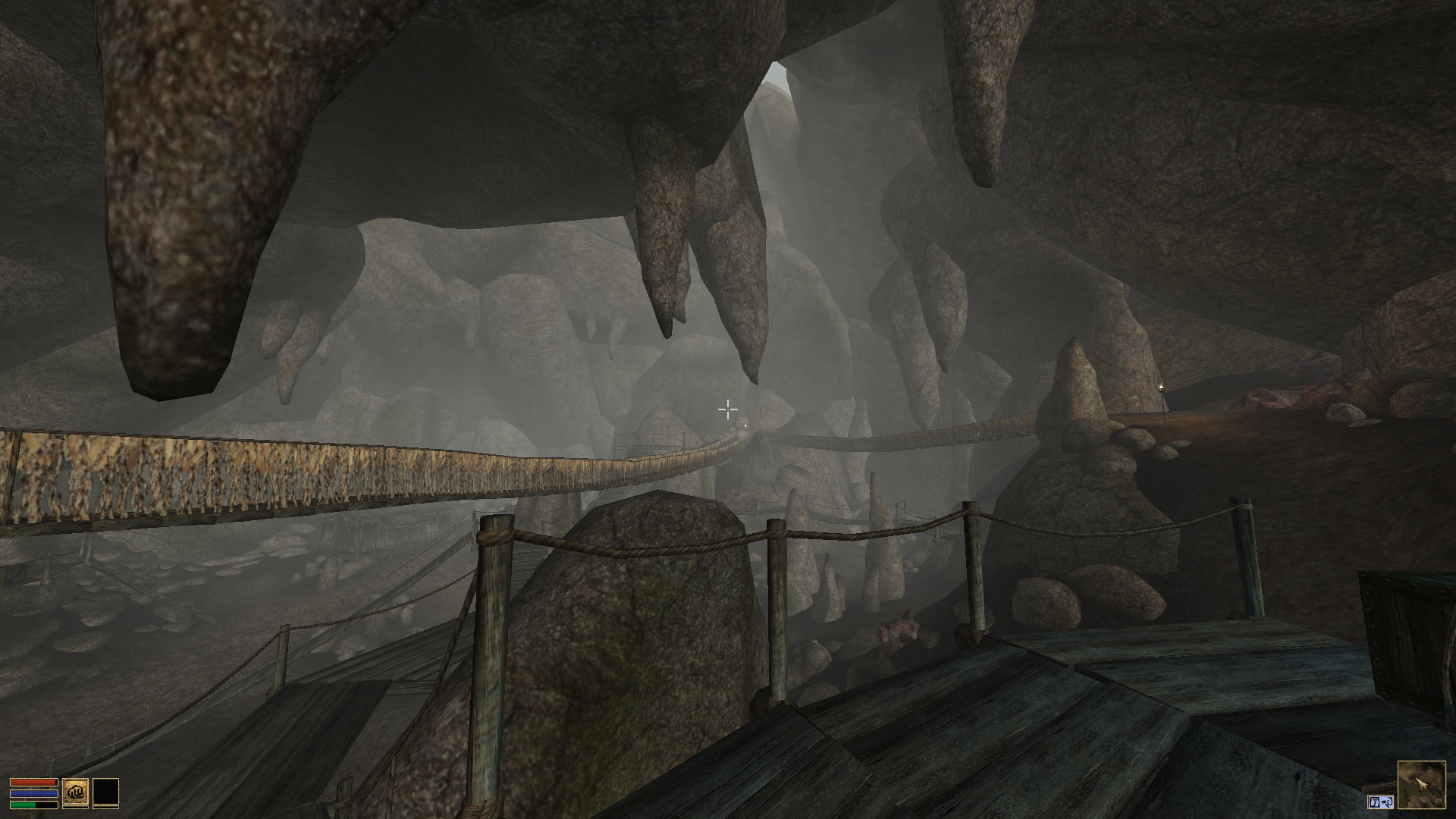 Grabbing this file again to hopefully wrap things up in terms of detailing. I might also make some fixes here and there where I see placement issues.

Dropping again. I finished detailing the area as planned, but then got a bit carried away testing out new plants for the region in the surrounding area (the mine is in [-6, -21]. The asset palette is in Nemon's test cell; forgot the exact ID, but it's something like TRNemonTestGL.

Hmmm, could some of the vanilla WG clusters be replaced by the t_mw_terrrock_wg peak mesh I added for ruinous keep? It looks a bit odd in places.

Checked back in after some minor work.

I'm grabbing this to merge new ints and fix a few bugs.

I quickly merged a Daedric ruin and two shacks.

Grabbing for some further work.

There's some exterior work needed for this claim: https://www.tamriel-rebuilt.org/claims/roth-roryn-velothi-dwelling-3
The area is going to be home to a small guarherd, owned by a commoner living in a cave dwelling.

Exterior edits are also needed in -12,-21 to accommodate this claim: https://www.tamriel-rebuilt.org/claims/roth-roryn-kwama-mine-4
An entrance should be added for the kwama mine, with an additional cave dwelling.

Grabbing to merge some interiors and delete the cells that got moved to Hlaalu Thirr.

Dropping. I also had to move Natural Cave 8's entrance so the interior would fit and I deleted the observatory from the Dwemer Ruin in -12,-16 as it was not present in the interior and we have too many of the things as it is. I also added guars in front of Valothi Cave Dwelling 3's entrance and Kwama Workers in front of Kwama Mine 5's. Finally I got rid of the name KEEEEEEP from 0,-23 and changed it from Armun Ashlands to Roth Roryn, as I swapped the other cells in that column (in the Hlaalu Thirr file) too. Maybe change it to Aanthirin so the region map isn't weird.

Grabbing to give RR its new rocks.

Holding on to this a little longer for flora placement.
Needs the data addon, but I didn't clean any statics. Make sure T_Mw_TerrRockRR_CaveEntr_08 doesn't get cleaned until it is merged into the data addon.

The meshes included in the latest file can now be ignored in favour of these: https://www.tamriel-rebuilt.org/asset/missing-rr-meshes-and-improved-vcol

Posted a cleaned version just for the sake of playtesting. @chef, don't donwload it.

Finished flora on the west side of the river, posting a file for safety.

New file up with remade shipwreck, split the hull.

Grabbing the file to update the flora of the remaining cells.

I'm taking this to merge some more claims, I'll also check the books above.