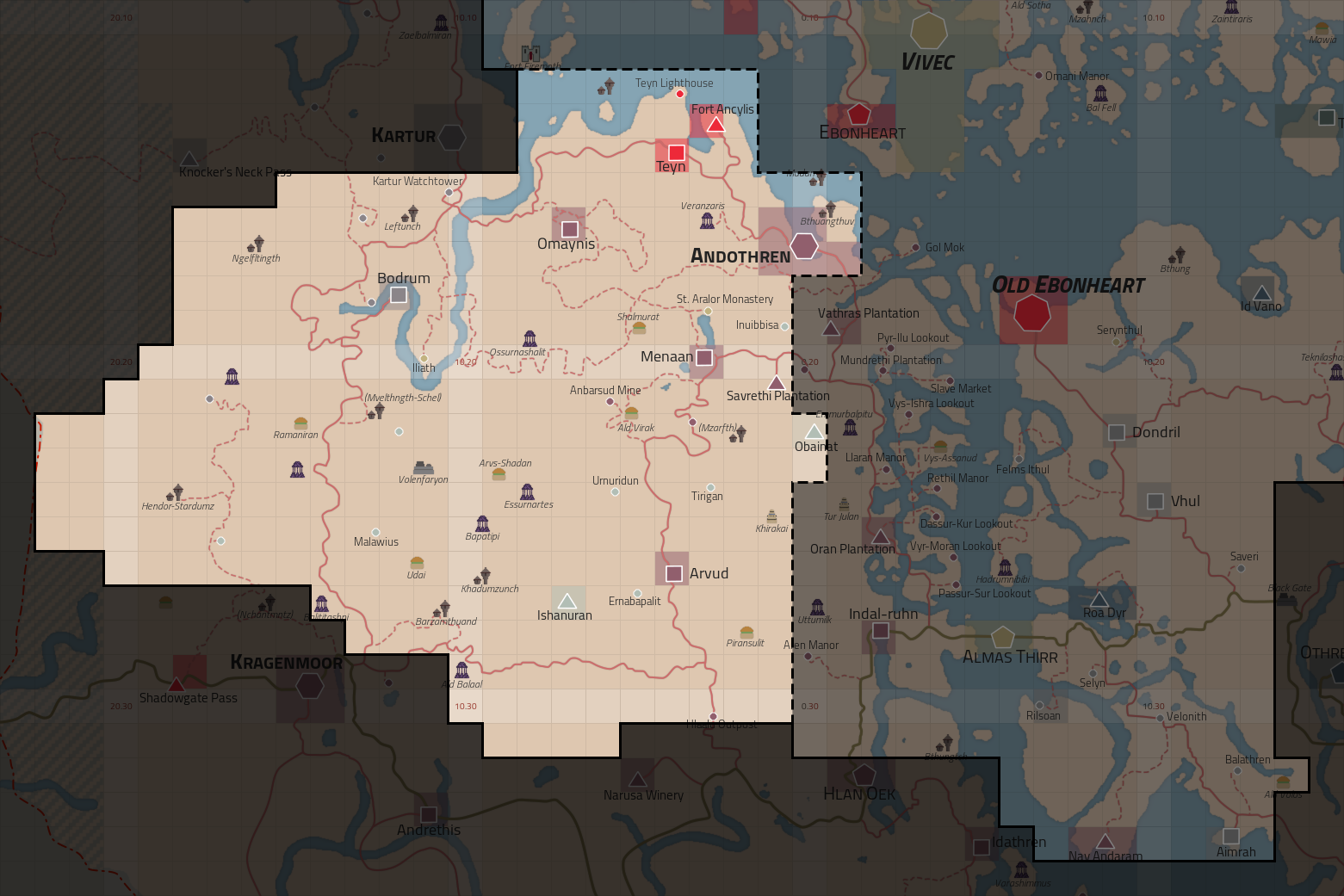 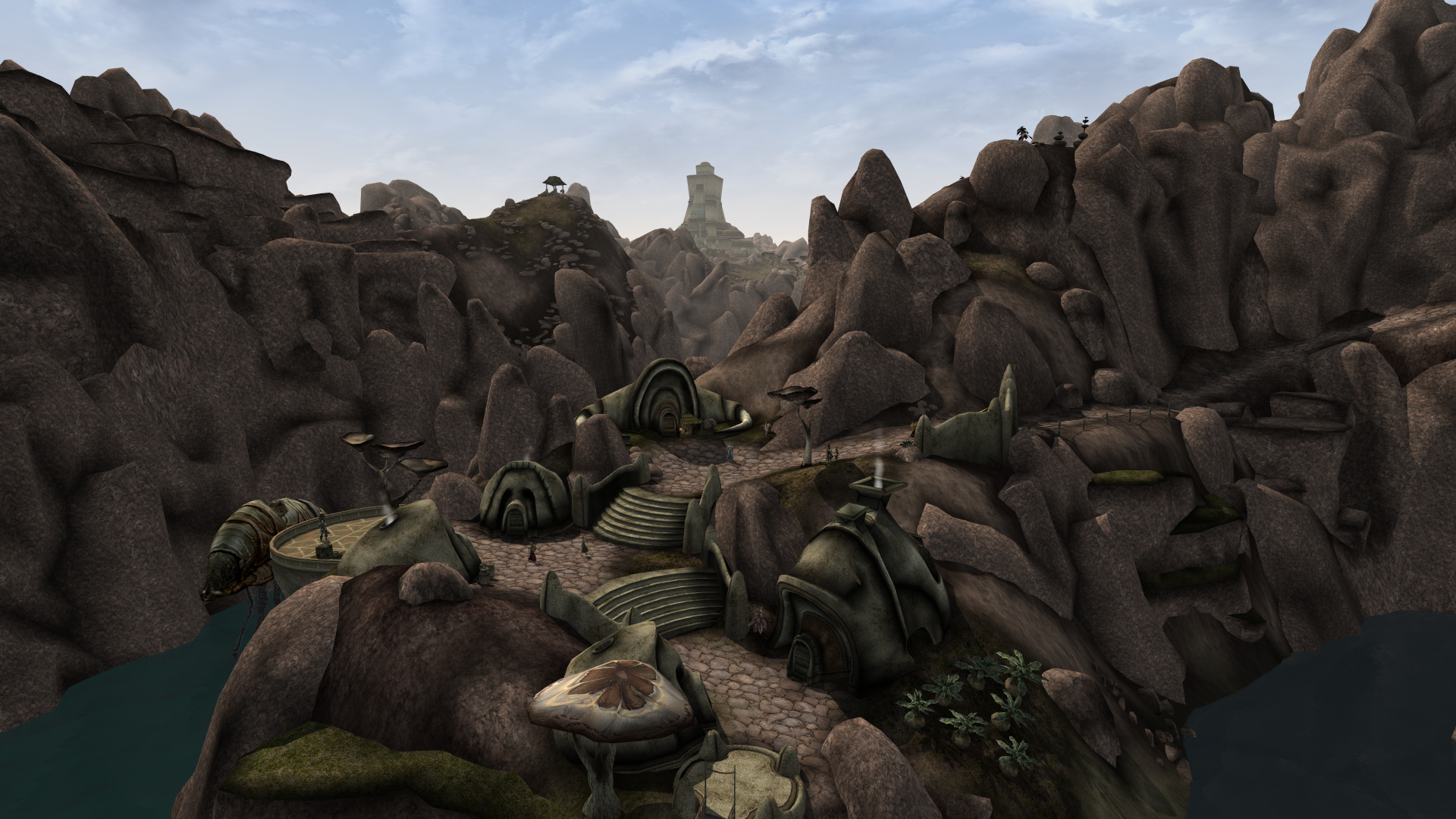 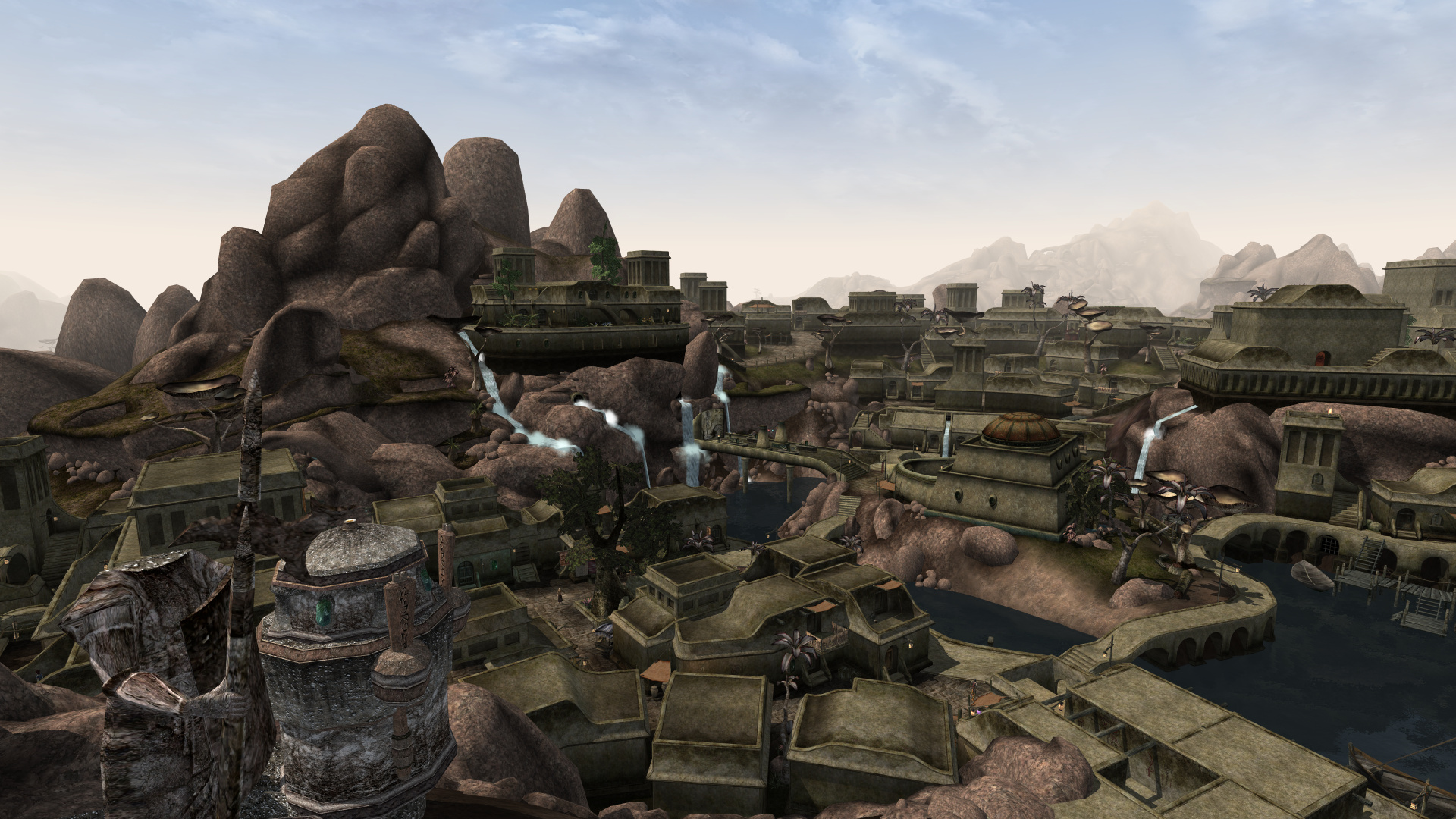 The city of Andothren is the prime Dunmer port on the Inner Sea.

Users of our Preview plugin, which contains work-in-progress exteriors from an earlier time in Tamriel Rebuilt's development, might already be familiar with a largely extant Andothren and may be wondering why the release is taking so long. To answer this, it is important to realize that work on the exterior and many of the interiors in Andothren dated back to 2006 (!). In the meanwhile, the development team has changed almost entirely and the quality and stylistic standards have evolved substantially. Hence, a near-total revamp of this prior work, while keeping in mind reams of forum discussions and conceptualization going back more than a decade, was inevitable and constituted one of the main hurdles for the next release. We are happy to say that this work is now concluded. 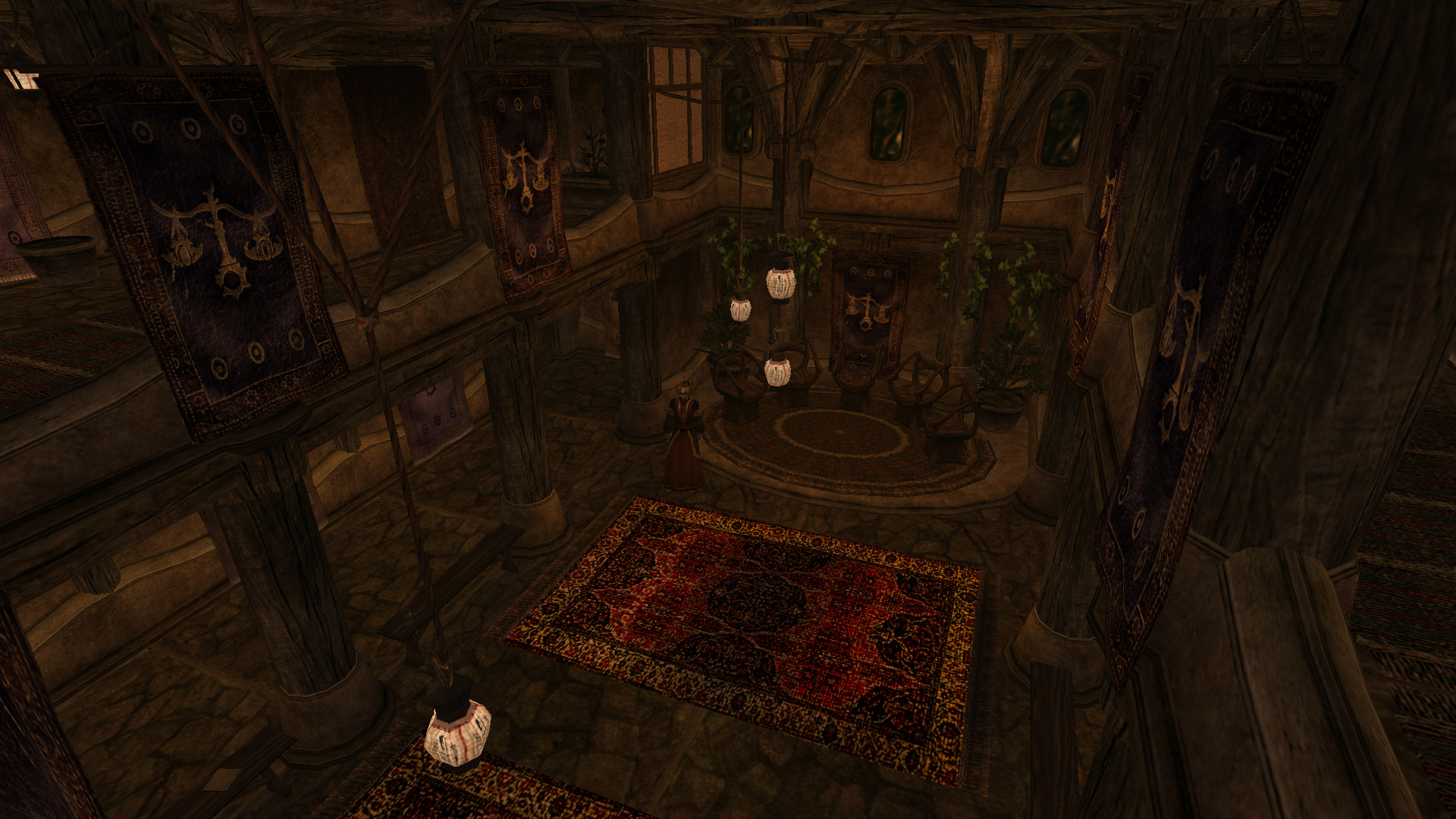 The heart of commerce in the Hlaalu Council Manor.

Andothren, with its streets and houses bustling with newly-added NPCs, is cozily nestled in the Bal Foyen -- a crater left by the goddess Almalexia, as she struck the hordes of Kamal down into the underworld. The central Temple island, complete with a new mural of Almalexia, commemorates this event. In the eastern district there are outlander-friendly taverns, shops, guilds and the Hlaalu Council Manor, the economic heart of the entire region. There you will also find the busy harbor. In the western district you will find more exclusive dunmer dwellings and many opulent manor houses (created with our new Hlaalu modular building assets). Overlooking the entire city is the fortress-like Andas Manor, home of the Hlaalu councillor and de-facto ruler of the city, Tholer Andas. 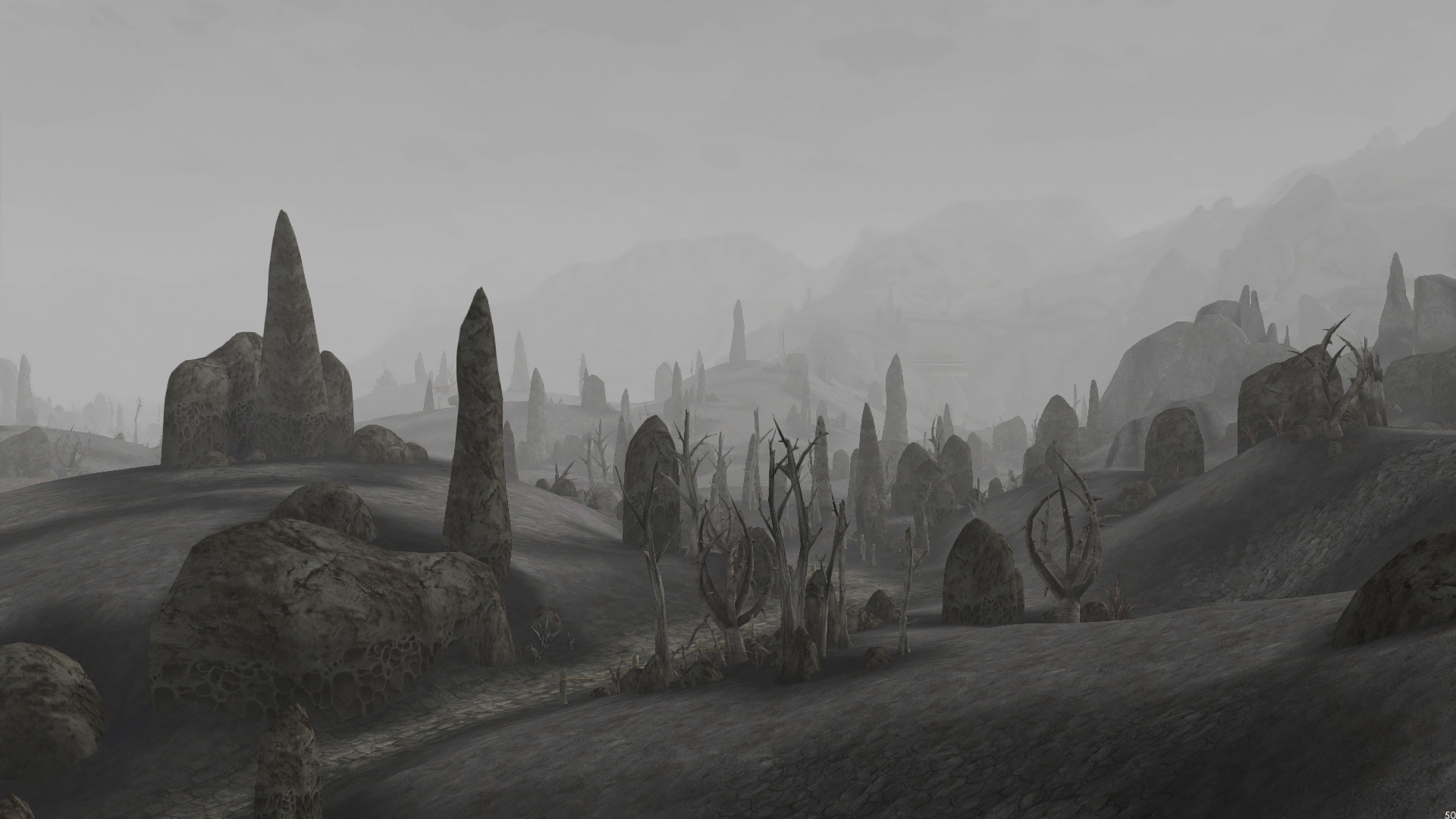 The Armun Ashlands -- haunted wastelands home to ashlanders, bandits, and the occasional vampire.

The Armun Ashlands, which lie south of Roth Roryn, form a volcanic ashbowl -- a southern reminder of the cataclysm of the Days of Fire, when the Red Mountain first erupted, covering most of Morrowind in ash. This is a dangerous land, prone to volcanic activity and ash storms, and host to the formidable Armun kagouti -- hence, suitable for high-level characters. Today, this area is inhabited mostly by ashlanders of the Ishanuran tribe. The isolated Hlaalu outpost of Arvud guards caravan routes, but is embattled on several fronts. Bandits prey on caravans, corrupt Andothren officials sap local coffers, and vampiric activity by the Baluath clan is showing worrying signs of increase. 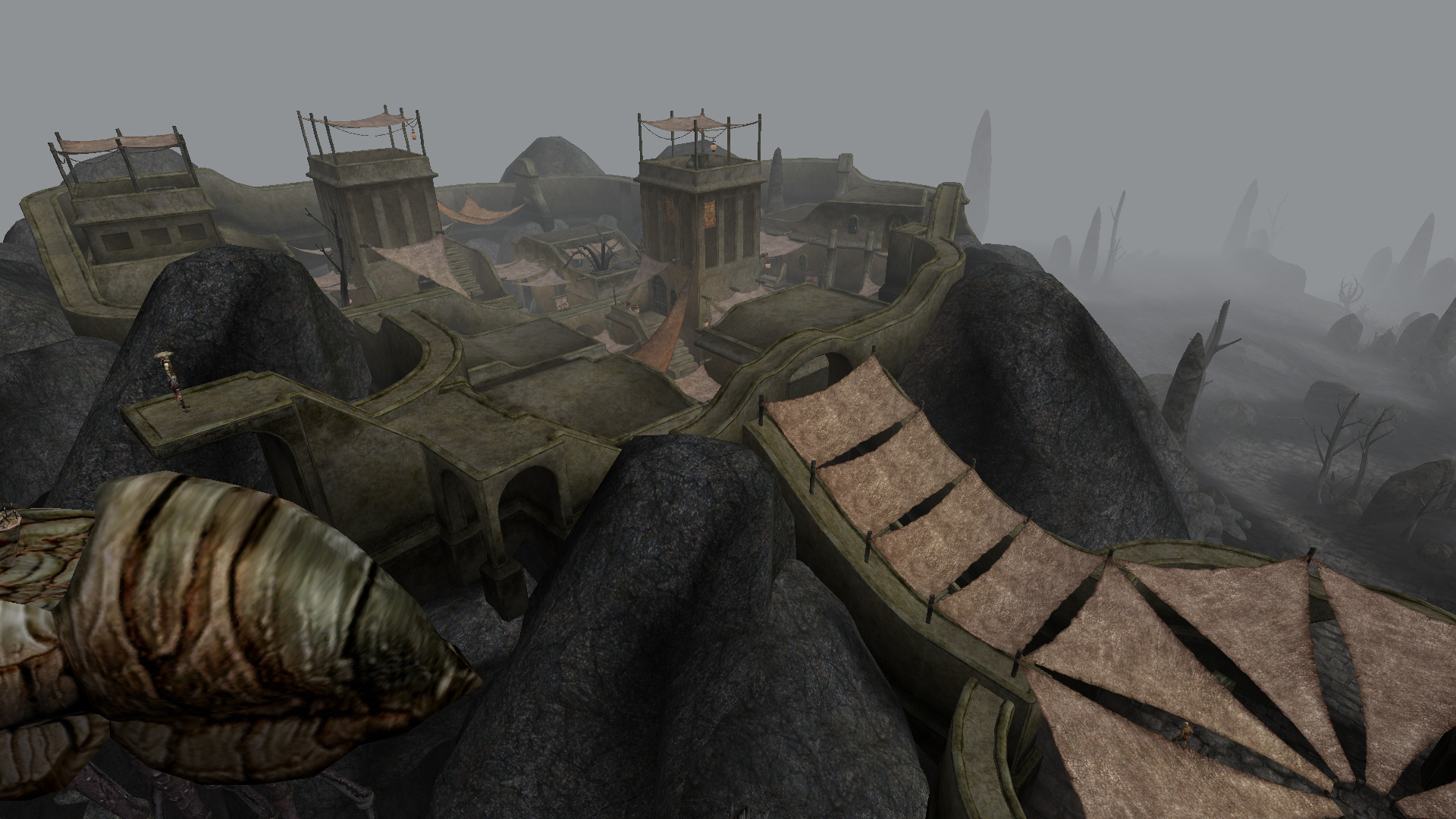 The isolated Hlaalu caravanserai of Arvud. 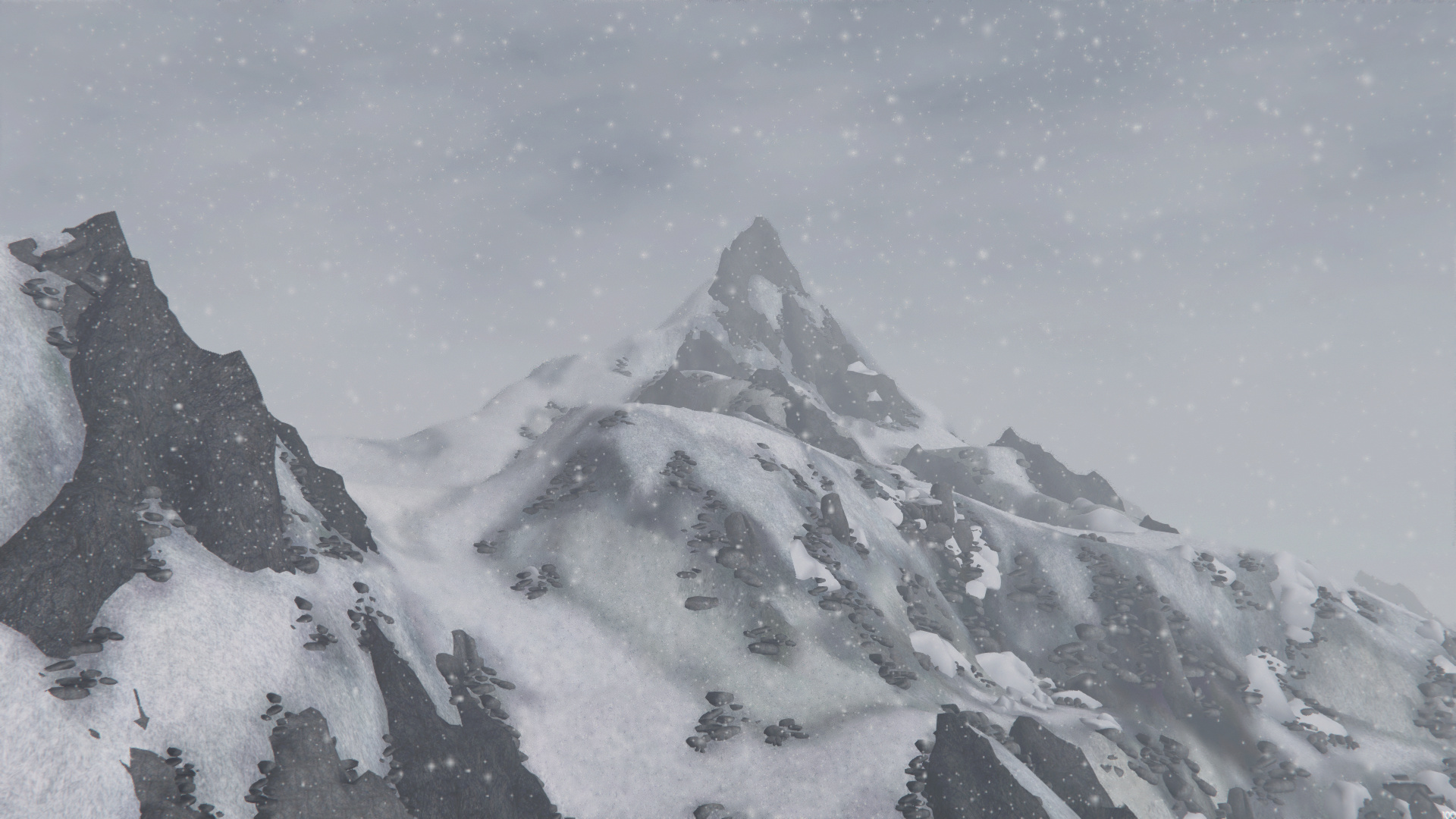 The frigid heights of the Velothi Mountains.

The southern Velothi Mountains tower over the Dominions of Dust. This region will bring you the first breath of Morrowind's frozen northwest, home to House Redoran. The steep, wooded valleys, host to the famous Dwemer ruin of Hendor-Stardumz, will be your port of call in several high-level quests. Along the snowy ridges, you will meet the Malahk orcs -- larger and less compromising cousins to Orsinium orcs. Newly-revamped rock textures and tree assets help set this region further apart from the kinds of snowlands seen in the Bloodmoon expansion to the original game. 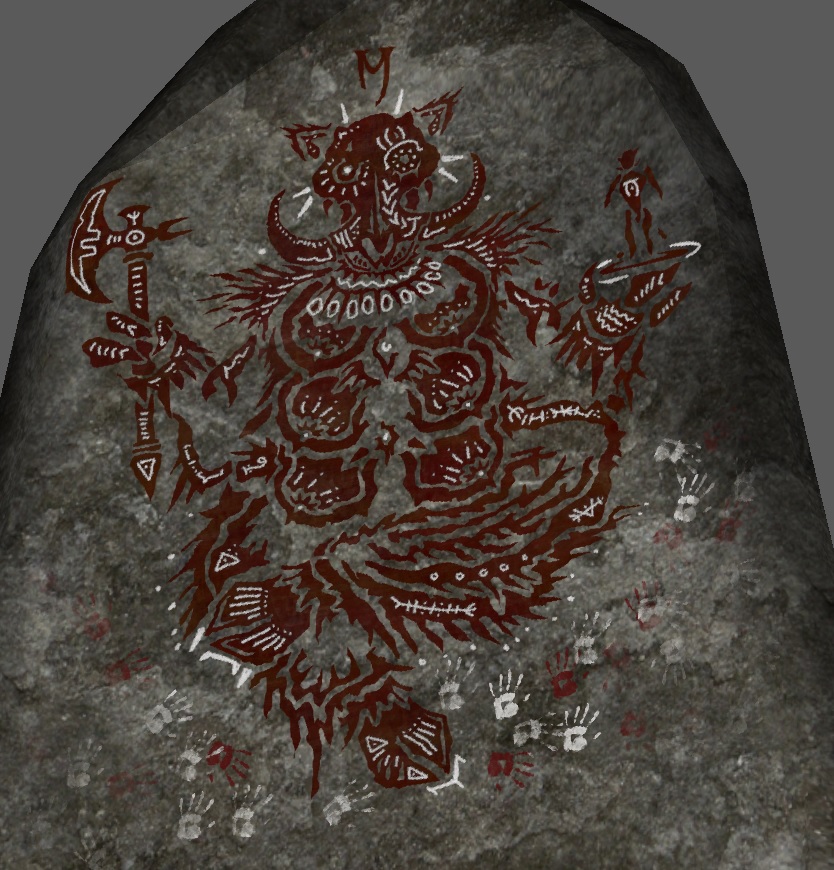 The Malahk orcs, though considered brutes by their Redoran enemies, are quite complex in their art and religion.

What still remains to be done for this release is to finish a renovation of the exterior landscaping for the Roth Roryn region and for the chunk of the Velothi Mountains present in the next release, to bring these areas up to modern Tamriel Rebuilt standards (Armun Ashlands is already nearly complete in this regard). Most interiors have been finished and only a few areas still lack their NPCs. 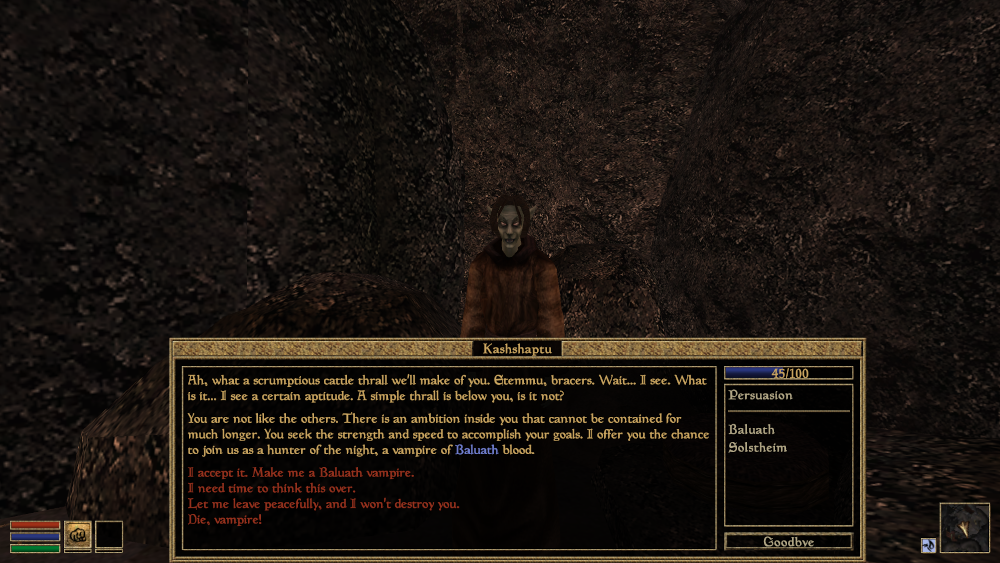 For less scrupulous players, the Baluath vampire clan offers the possibility of nigh limitless power.

But the largest remaining hurdle is the quest content. And it is a massive undertaking -- roughly 140 release-critical quests are currently being tracked and worked on, along with several optional ones that might still be included in the release. To put this into perspective, the entirety of Tamriel Rebuilt released so far includes 360 quests. Yet, there is light at the end of the tunnel -- for a couple weeks now, all of the critical quests have been claimed and are being worked on by developers, and roughly 40% of the number are now complete or in testing. This also means that for people interested in helping the Dominions of Dust come to fruition, or to gain a sneak-peek of our progress, it is high time to start playtesting! If you are interested in this, come speak with us on our Discord server, where we will be glad to help you along. (Of course, volunteers interested in helping with any other aspect of Tamriel Rebuilt, be it exterior or interior design, asset creation, concept art, or anything else, remain more than welcome, too!)

While this is enough news for today, Dominions of Dust isn’t the only area of Morrowind currently being worked by our team. Exciting progress is made in several other new and old regions. Should stars align, expect to see news of these developments in the coming month.

Very excited about this future expansion. Special mention for the caravanserai of Arvud. Thanks for the teaser.

Will there be any boat docks in the forseeable future incase someone will be using any boating mods? Sort of like docking?