Regions we agreed on in placement (and sometimes names)

Regions that were deferred on account of fact finding

Kaziem created concept art and hopes for both feedback/discussions on it, as well as more functional concept art from other artists.As it is right now, she is drawing in isolation, which makes it hard to be creative.

An asset claim has been started to collect more concept art, hopefully from other people: http://tamriel-rebuilt.org/asset/salt-washes-canals

Atrayonis volunteered retexturing some of the Vivec Sewers with Deshaan ground textures and hooking up an example cell, which should be finished during the week.

Stairs - the concept art involves long spiral staircases, which would be about as high as some of the Greater Dwemer Ruin towers. However, they should probably be implemented by loaddoors in game. Some storage and cistern rooms should be near the top or near the bottom of the “staircase” to add a feeling of height and to put in a place where slaves would get a bucket of drinking water.

A quick concept art was drawn by Gnomey as to how a delivery and water system would work on top of the “pump”: 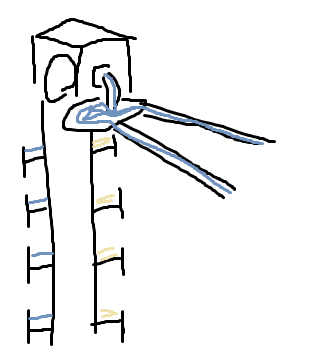 The pump and buckets would be made of concrete, bugshells, wicker, saltstrap or similar materials. Buckets might have two chambers, one above the other: one chamber carries the water up one side of the pump while the other is empty and facing down, and then the other chamber is filled with saltrice and other goods which it carries down the other side of the pump while the first side is empty and facing down. The chamber carrying saltrice and other goods could be wicker.

Imperial Legions and Navy were discussed as well - a suggestion to a Legion questline was a corrupt official trying to build a power base far away from the watchful eyes of the Empire.

In general, information is lacking. The picture detailing imperial administrative structure was lost when an image hoster collapsed. A similar diagram of Province Cyrodiil (http://project-tamriel.com/viewtopic.php?f=144&t=479), while helpful, is naturally meant for the unique situation of Cyrodiil and does not go into much detail as far as the Imperial power structure in Morrowind is concerned.