Originally penned by roerich and edited as revised during the meeting, an Imperial take on the land and its inhabitants:

Marahk-Bazhul is the Orcish name for a stretch of highlands between Nibenay, Skyrim's Rift and Western Morrowind, which is occupied by the beastmen. The green-skin inhabitants are known to their neighbours as Malahk-Orcs, infamous for their merciless and persistent history of raiding and performing massacres in the name of their blasphemous god. They are feared as gruesome barbarians, who fight with a frenzy and bloodlust completely unknown to any of the civilized races. Their hidden valleys are said to be hard both to find and to reach, even for trained scouts and mountaineers. The lone path that snakes its way from Cheydinhal to the Dark Elven lands is thankfully well protected by the Imperial Legion. The few reports of the region that have made their way to Imperial intelligence speak of valleys drenched in blood and mountaintop hideouts carved from dragon bone. When the Malahk-Orcs aren’t slaughtering their neighbours or lost travelers, they keep themselves busy in a state of constant warfare between the different Orcish clans that inhabit the various caves and forts. If any of this isn’t enough to make even the foolhardiest adventurer reconsider travelling in this region, there has even been reports of large scale cannibalism among these cursed beasts.

https://www.tamriel-rebuilt.org/asset/malahk-orcs for active development of the people and the region. Not a priority at the moment aside from general worldbuilding.

The border pass, which is labelled "Septim’s Gate Pass", has been decided by ennui to be renamed "Knocker’s Neck Pass", referred to as "Knocker’s Neck" by the locals. The western pass is still under Imperial control while the eastern one has fallen under Redoran or Buoyant Armiger control (assuming it had ever been under Imperial control during the Septim days, all that remains of the Imperial pass is a ruined tower home of indeterminate age). Trade caravans are usually accompanied by a Redoran champion whose role is to challenge Orc raid leaders into single combat.

Tileset should be either Velothi or Redoran (depending on who owns the eastern half). This needs to be tested, however. 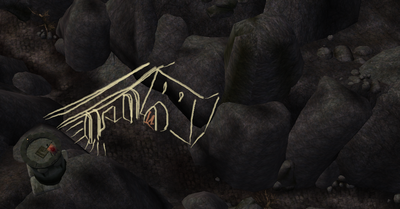 As the Thirr River Valley can be constructed with mostly orange rocks, Othreleth Woods mushroom mangroves, and Aanthirin Flora, opening up a large part of Lake Andaram for exterior claims is feasible. Its borders with the Orethans do not matter as much, and the Deshaan parts will be done later, as we are still lacking a lot of models for this region.

The main part can be tackled when the Aanthirin visual upgrade has been done, claims to either side of Dres Horak when Deshaan landscape assets are sufficiently done, and Dres Horak itself as last, and at earliest when Dres architecture assets are done.

This would leave these cell parts (including existing cells, to make transition easier): 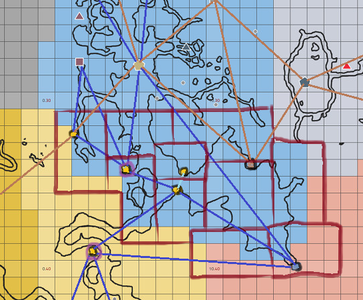 The current riverflow has been discussed as well. The riverbeds are currently cut off because of the heightmap changes. 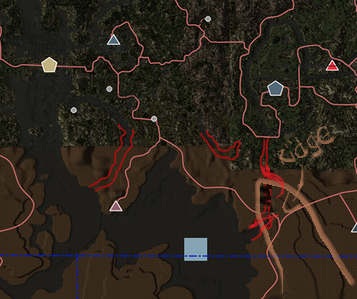