There is not actually much content to be posted for a March release. There are a couple of merged interiors and the Signpost revamp for InDev, Mainland could have a few bugfixes, but it’s not clear what’s going on in the section files, and the big thing for Necrom - the Ordinator voices - would work better in a big update with at least some of the new quests from the Quest pack.

As such, the TR1703 update will just be skipped over in favour of TR1709. If a significant amount of work get finished in the lengthy interim, such as the TR_Mainland quest pack, there’s always the possibility of an unscheduled update to bridge that gap.

The 1709 release would be a good opportunity to start merging the non-controversial parts of TR_Travels into TR_Mainland. This is currently the Llothanis/Gah Sadrith boat travel.
However, it seems that the lack of connection from Tel Branora to Sadrith Mora is confusing at least some people. Discussion about revamping this has been moved to the forum topic here.

To create exterior claims we need: 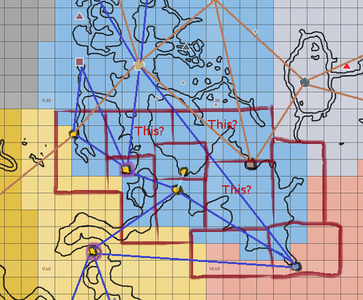 Atrayonis is going to set up some test claims (Stage: In Design) this week.
These are three claims around Lake Andaram, using existing tilesets, with one Velothi settlement under Indoril control. The Nav Andaram claim as well as the Thirr Valley borders are not going to be developed yet - Thirr Valley hasn’t gotten a region template meeting yet, and Nav Andaram as a player stronghold and the lynchpin of the Thirr conflict needs much greater consideration before it can be turned into an exterior claim.

The eastern claims - the eastern bank - should be untended, so that it is believable that Indoril did not see Nav Andaram coming. The Thirr also gets rather narrow in places, which should have additional depth or otherwise be ill-suited for bridges.

The current interior can be reused for the stronghold of St. Felms, a major pilgrimage location in the Velothi Mountains. The claim can go ahead.

Several aspects of the Foul Murder questline were discussed:

Part of the questline would involve gaining the favour of Mephala and Boethiah by making choices that please them.
Perhaps the player would be able to make a choice as to the fate of the Ordinators:

Perhaps the player would be able to sow seeds of doubt in the questgivers -- setting them against the Temple -- and could encourage the Dissident Priests to take more direct actions against the Temple, (the more direct actions need not actually occur in the questline), which would please Boethiah.
Perhaps killing actors involved in the quest would please Mephala, though it won’t stop the quest from breaking if the player kills the wrong actor at the wrong time.

Gaining one ringlet of the Wraithmail would involve summoning Peakstar as an ancestor of kinds of the Nerevarine. She would both point out where a ringlet is located as well as the need to gain the guidance of Mephala and Boethiah.

One (the same?) ringlet would be held in the private collection of a prominent higher ranked individual in the Imperial Cult. This individual has recently been sidelined by a firebrand imported straight from Cyrodiil, who wants to convert a lot of Dunmer out of their heathen way into the waiting arms of the Daedric Cult. As Dagoth Ur and the Tribunal are suddenly a much lesser problem, the Empire is no longer concerned with rocking the boat as much as it was before, and this is the first inkling of a much greater conflict in the near future.<

As a way to bypass the Daedra, the player can go through the IC and ask an Oracle. The Oracle, however, will be less convenient. Perhaps the player needs to wait until the Oracle gets a vision, and the Oracle will likely only give cryptic hints, so the player will need to investigate.

Once that is done the player will have all the necessary ringlets and can proceed to the final part of the quest, which we didn’t get to in this meeting.