The discussion veered off into the Deshaan as a whole.

To clarify where they are located, a location which is currently covered by no province mod and is in fact a gaping hole in our maps. 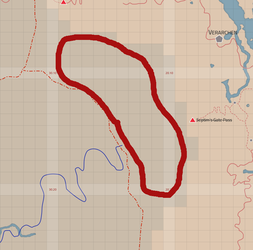 The territory is on paper part of Morrowind because the Imperials don't want to deal with it. They assigned it to Morrowind and washed their hands off it that way. The Redoran also don't want to deal with it, they trade reasonably with some of the tribes, and send along protectors with trade caravans who pay in coin. Occassionally, Malahk Orcs raid the pass road and the Redoran champion(s) meet them there and duel it out with the raid leaders.

Malahk Orcs are brutish but not stupid. They recognize their strengths and weaknesses, and try to capitalize on the former while covering for the latter. Rather than relying purely on their natural strength, for instance, they might carry halberds and form blocks in battle like Swiss pikemen.

Politically, they are a tribal confederation with no great chieftain to unify them. Like Switzerland, they are a competent fighting force surrounded by powerful neighbours.

We started off discussing future scenes. A suggestion was that the end part of the questline could involve the Nerevar bonewalker disappearing from his position in the Temple catacombs for reasons unknown, either due to the sliver of soul still left in him calling him to Alaundro Sul, or the Nerevarine, or a plot coupon that has yet to be determined.

The bonewalker might have been put in the deeper catacombs in the first place after Dagoth Ur’s awakening, when looking at Nerevar’s lack of face was more unsettling than nostalgic for the Tribunal. It might have always been there and just forgotten.

In any case, the bonewalker itself was said by MK to be relatively obscure, so its disappearance wouldn’t have been noticed immediately. We did not agree if there is going to be a disappearance at all, just hashing out possibilities and reasons.

A quirky suggestion was that he painted the F.M. mural, but that was more discussed for the funny mental image than anything.

A side-discussion was about the similarities and differences between the Ghostfence, TR’s Necrom machine and the novels’ Ingenium. If there is any part in TR where we might want to set up novel canon, then this would be the place to drop references.

With the fall of the Ghostfence, families might start building individual ghostfences again and demand the ashes of their ancestors back. There might also be ghosts wandering around Necrom who are angry about not being or almost being used to power the Ghostfence (an Ashlander soul was mentioned, raising the question if all the dead resting in Necrom did so of their own will).

Now convinced that we have good individual scenes, the focus was put back on the flow of the plotline and tying it together.

The people involved in the questline have been recast. Alvu Sareleth, the Matriarch of Necrom, is the zealot who has started to become more active and aggressive, ordering Ordinators after the Ashlanders and pursuing darker sources of information. Her goal is to deny the niggling thought that the Triunes murdered Nerevar, as the suddenly legitimized Nerevarine cult proclaims. Simine Turethi, the Canon of Necrom, is the doubter who has been shaken so much that her distress has been caught by the Dissident Priests and the Temple priesthood who gossip about it.

Both are in many ways mirror images of each other. Both scholarly women at the top of the Temple hierarchy, who were deeply shaken by Vivec’s declaration of a return to ancestor worship (with the Triunes as “mere” saints) and the legitimisation of the Nerevarine cult. The difference is in action - Alvu became more aggressive and demanded answer, Simine almost completely retreated into herself and began doubting everything. Erendes Hlevran, the Marshal of the Ordinators-in-Mourning is the third party and his involvement is still up to debate. He represents both a counterpoint to the two scholarly dissidents as well as one to the boots-on-the-ground Ordinators at the beginning of the questline who were just following Alvu’s orders until they massacred the raiding Ashlander tribe. Whereas the ordinary Ordinators have become afraid and uncertain, he remains resolute.

A scene was discussed near the end, when the summoning of Alaundro Sul’s spirit through the wraithmail was nearly completed. Suddenly, Erendes at the top of Ordinators would come in and confront the group (Alvu, Simine, player) about their heresy. Whereas Alvu and Simine would both want to know answers for different reasons, he would confront them with the idea that they are better off not knowing.

The first quest is about "finding" the people in question.

It is either through the Dissident Priests or temple rumors that there is trouble brewing in Necrom, or an actual Temple quest (for Temple players) that the player is pointed at Simine Turethi, who is distressed over the Ordinators who went out to deal with raiding Ashlanders but never came back.

The quest giver here is Simine. Alvu, if talked to either due to the Temple quest or rumors, will point the player at Simine, who has recently started doubting the Temple and her teachings after the Nerevarine cult was legitimized and the Triunes are to be reduced to mere saints in a renewed focus on ancestor worship.

The quest ends at a cross road. Simine is worried about some Ordinators who went out to combat Ashlander raiders with Nerevarine cult connections, but they have not returned. The player can either follow the Ordinators to quest two, or report her to Alvu, who has her sent to the Ministry of Truth and then sends the player after the Ordinators anyway.

The second quest here is going to be the point of discussion for the next meeting, as either Simine is permanently out of the questline (or Alvu if the player takes Simine’s side), or she is returned from the prison moon later on and they give quests in tandem.