This idea was discussed previously, but for the hexagonal Clanstead platforms, we would need only 2-3 wall sections, 2-3 buttress variants, fences, a floor, and optionally a blank hexfloor.

The actual ground will be created by sharp landscaping, and the canton walls will be the only meshes used. This solves a lot of lighting problems that would result if it was one big mesh.

The center of one individual wall mesh model should be in what would be the middle of the complete platform, to allow for easy 60° anglesnapping.

The different wall sections will be variations of each other scaled to the correct sizes in the modelling program, so that no scaling in the CS will be necessary.

Dres Horak would have more slaves than most Dres Clansteads. Whereas in the Dres Clansteads slaves are mostly kept in holding pens from where they are assigned to work in the clan’s saltrice paddies, Dres Horak is a trade port with no saltrice paddies of its own, so its slaves would mostly work as porters, maintenance, and operators of machinery, but not of insects. 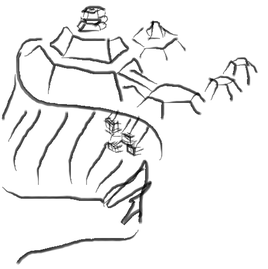 (Some?) slaves in Dres Horak are kept in cages formed of plainstrider limbs lashed together, suspended on the side of the cliff overlooking Lake Andaram by sturdy ropes staked into the soil of the Deshaan above. These cages would be reached by Skyrenders and ladders, or by clambering along the ropes.

Like the saltrice paddies, Dres Horak would have a sort of paternoster transporting goods and people between the settlement and the sea-level industrial harbour.

There should be a couple of watchtowers facing the lake.

There were some more discussions about asset requests, the perception of TR from the outside, and current problems.

These will be elaborated on in future meetings.