1 First, quickly go over the current implementation of the region. This stage is about taking stock of what we have to work with.

Shipal-Shin is an untextured mesa heightmap, and Narsis in its half-island shape, remaining as leftover of older days, has a WG environment. The Thirr river originates here.

Currently, only Narsis is implemented and Septim’s Gate Pass is represented by a plopped down exterior fort that was moved down here from its old position next to Almalexia.

2 What is the general purpose of the region? Why does it/should it exist?

2.1 What is its narrative role?

The region should fill the role of eye candy. The red canyon look and the actual desert-like desert will make it memorable for the player, particularly if and when the border regions of Cyrodiil and Black Marsh allow for a transition.

The gameplay role is both wilderness, as befits the secretive side of the Hlaalu, and bustling trade and travel.

2.2 What is going on there? (ie. is it challenging wilderness, or does it play an important role in commerce, pilgrimage, etc.?)

The wilderness should be challenging, particularly closer to the Velothi/Valus mountains peaks and further from the border crossings.

The Hlaalu capital of Narsis presents a concentration of intrigue, bureaucracy, and smuggling activity. The Imperial Proconsul resides there as well, adding even more importance to the place.

It is also a good location for cults, both official and hidden. From Nibenese cults, to Nerevarine cultists and the northernmost cell of the Brotherhood of Seth, this region should have enough Telvanni towers and spacious sewers for everyone. In particular, the Meridia cultists who assimilated a bit too much (from the 2016-11-27 Meeting Summary) could be relocated here.

Finally, the border posts make trade, smuggling, and banditry an obvious choice of occupation for many people. The border with Cyrodiil sees less use now than it did before, as more travel and trade is happening via Kragen Mar in the north, but the border with Black Marsh still sees use.

3.1 Who inhabits the region?

Majorly Hlaalu, Imperial bureaucrats and guards. Assorted low-lifes. Two Goblin tribes, one in the north-western end and one north of Septim’s Gate Pass. And the nomadic Red Swarm Militia (called Kwoom Riders in prior planning) are all over the place.

3.2 What are they doing there?

The Hlaalu capital retains a huge collection of house members, the Hlaalu council, and bureaucrats.

The Imperial presence, with the Proconsul, has a hefty bureaucratic presence here as well, as much of the eastern provinces’ administrative tasks and personnel go through Narsis.

The Red Swarm Militia are herding bug-goats (or similar critters), but also engage in banditry and trade (for handmade items) with the Hlaalu.

Everyone is engaging in trade, one way or others. Of particular note is the supply train that flows from Narsis into Black Marsh: it is one of the lynchpins of keeping the Empire’s failing colonies in northern Black Marsh running for a bit longer. Colonists and “Colonists” are also shipped south, the latter often end their journey in Stormhold.

3.3 Who used to inhabit the region (especially before the War of the First Council)?

Certainly not the Dwemer. Aside from Proto-Hlaalu and proto-RSM (who were largely the same tribes and clans back then), there was a small Ayleid presence. As Stormhold was built on top of an Barsaebic Ayleid city, this presence could have been an outgrowth or outpost(s) and was located at the south end to guard the main settlement.

These groups herded animals, grew tanna, and traded, but not much else of note.

3.5 How densely populated (and where) is the region?

Narsis has the vast majority of this region's population, with smaller Hlaalu settlements scattered about it. Aside from the two towns, there are scattered farms (often Harmum root and Sweet Barrel) or plantations (Tanna).

In addition, Septim's Gate Pass lies on the border to Cyrodiil and the Red Swarm Militia saturate the wilderness.

4 What is the layout of the region? This stage is about discussing the implementation of the region in broad strokes.

4.1 How would the things within the region (dungeons, settlements) be arranged?

Kwama mines and colonies should be all over the place. RSM camps as well, with some actively mining a Kwama colony or two.

There are several sapphire mines in the region, with exploited ones closer to the existing road network and at lower altitude.

The Hlaalu locations should be mostly at canyon bottoms.

4.2 How do we want the player to experience the region in-game?

The experience should be the same as the difficulty and population distribution: the player will probably spend most time/get easier access to low elevation areas and areas near roads at first, especially Narsis.

Eventually, they will be dragged higher up and further away by quests and circumstances.

5.1 What assets that we currently have should get used?
5.2 What existing assets need to be modified?
5.3 What new assets (models/textures) need to be made?

Stuff that needs to be added

The existing cliffs need to be edited, same with the rocks. Someone needs to do the Brambles.

As 95% of the region doesn’t exist yet, the only CS work that’s outside for the normal claims procedure would be the fixing and prettying up of Narsis. Particular attention should be paid to the overlapping buildings (often sticking out of each other at awkward angles). 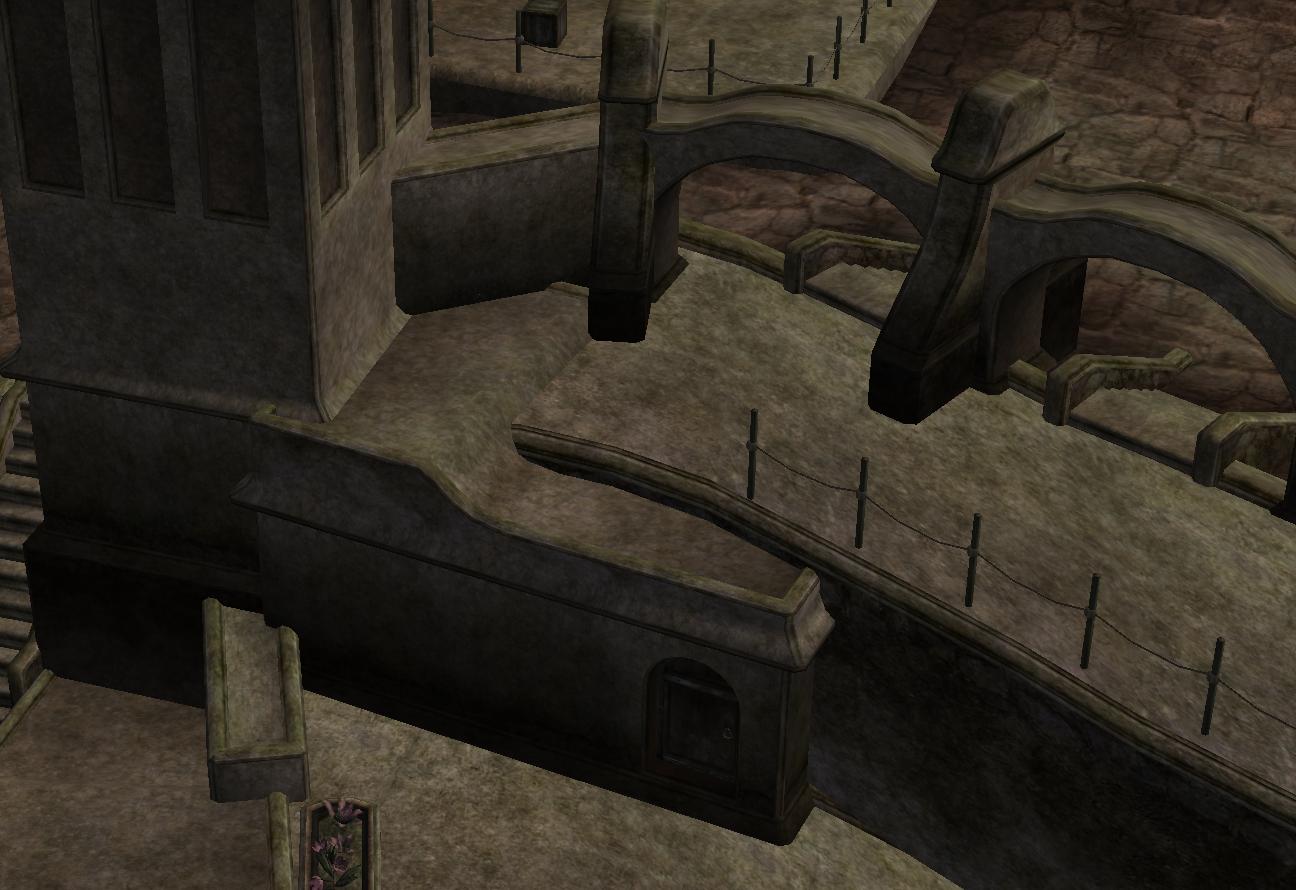 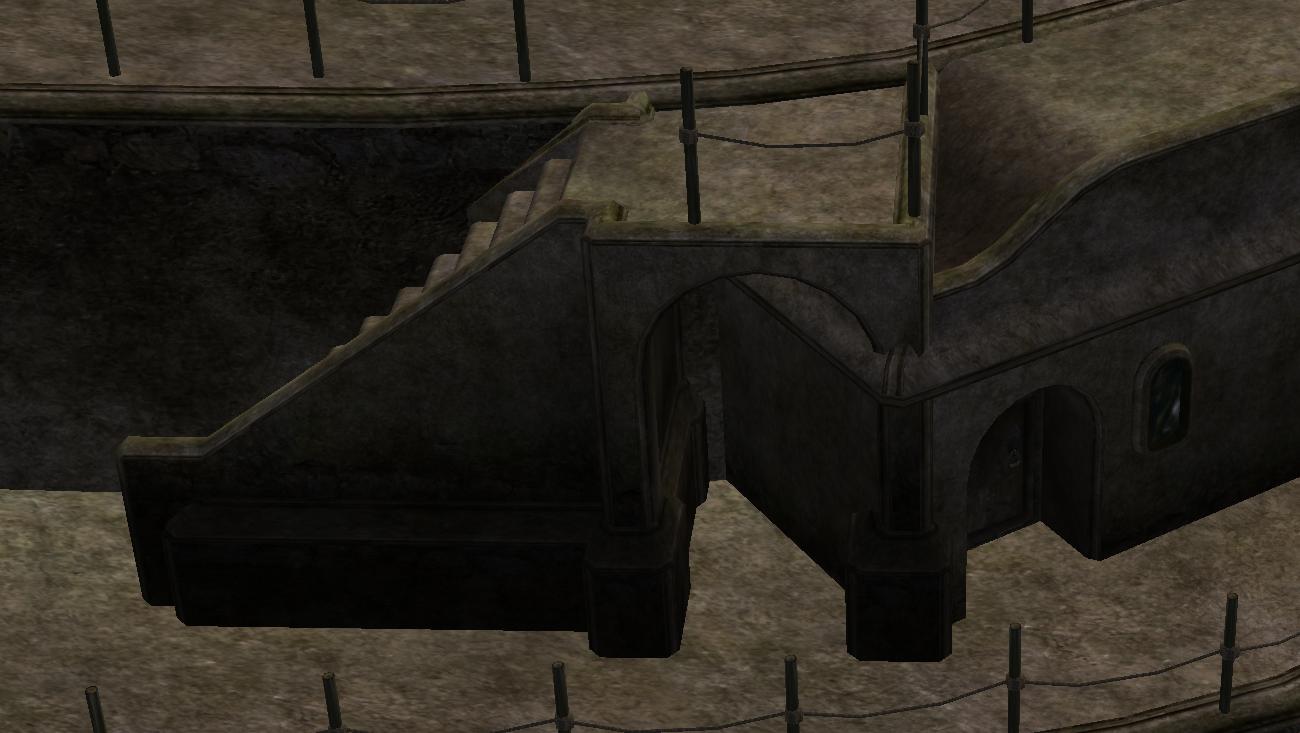 6.1 What sort of interiors would this region have (caves, tombs, etc), and in what proportions?
6.2 How many of each type of interior are needed?

6.3 Guidelines for the appearances of the interior (tileset, assets to use/avoid)?

Caves can have one odd sapphire node if they are to be placed higher.

If they are placed lower, underwater reservoirs or grottos can be added, which can be done by using the cliff meshes.

Consequently, this is not a region where a cave can suddenly turn into an underground Dwemer ruin or Chimer Stronghold.

There are already T_Cr_Goblin assets from PT that should be used for Goblin interiors.

For stylistic reasons, a lot of the more out-of-the-way and older bits of ancestral tombs should be quite humble and absolutely ancient, whereas the better maintained/newer areas should often be dazzling. In general, it is a good idea for these arid areas to work with cushions, textiles, woven stuff, etc.

6.4 Brainstorm/start a thread on the forums for “blurbs” for the interiors

This shall happen at a later time.