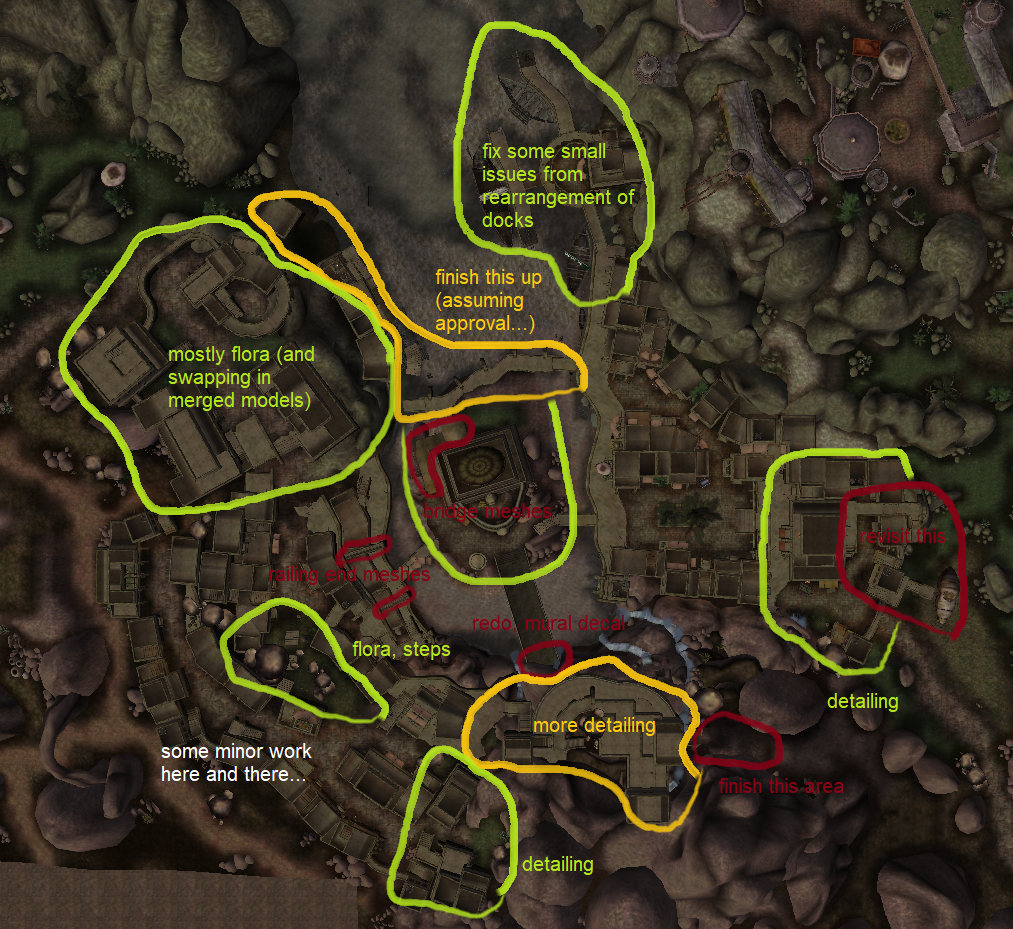 The temple island in particular requires some new assets, which are currently in development. Aside from that, overhauling the strider port and the town entrances, alongside detailing work ought to be what prevents Andothren from being finished.

If anybody is willing to set up the remaining claims for Andothren interiors to be reworked, please direct any questions to Gnomey who will be all too happy to help along. Short summary of the required steps:

Make a list of ints, check off/delete the ones already in the claim browser, split off the remaining interiors from an old Andothren file that still has them (v 012 and earlier I think), locate the old claim thread (there's a trick to this in editing the URL: if you can't locate the claim itself, find the closest Andothren claim number you can and add or subtract the number in the URL until you land at the right claim. Fun!), locate the old claim map image (hopefully you'll find it in an existing newer claim, otherwise I can do this bit), put all of this stuff together in a design claim together with Vern’s notes on the respective interior. When in doubt, refer to the Andothren claims that have already been put up and/or ask Gnomey.

The temple interior needs to wait on windows being added to the exterior, hopefully this coming week, and should be done in the style of vanilla temple shells (of the larger sort, as in Balmora).

New manors need to wait on their shells being polished up and uploaded as claims, which should likewise happen this week.

In general, discussion ended up revolving around Almalexia’s equivalent to the vanilla Pilgrimage of the Seven Graces, with Pilgrimage of the Seven Sacrifices being a possible name. One idea as a common thread to these pilgrimages is that each one is related to a time Almalexia sheds her skin, though on the other hand that’s also a concept that could get overdone.

An epos of Almalexia’s tales (not similar to the 36 Sermons by structure), detailing her “retirement” from warrior to mother was also suggested.

A possible collection of stories could follow the following pattern: