The mural is finished, although it has a square shape instead of the currently used round placeholder, this means the waterfall area around it will have to be redone. No progress has been posted since the last file on Sunday.

The rest of the design interiors either rely on the round interior piece or are “just in case” claims.

Dillon has suggested extending the Thirr Valley release file/region to the west, to allow for better questing for the TV release (coming after DoD?) 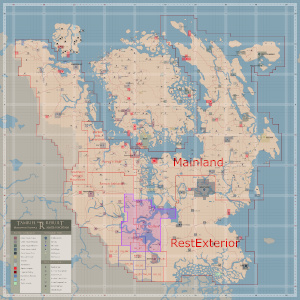 The third, https://www.tamriel-rebuilt.org/claims/sanguine-love, was a bit too massive in scope and proposal to discuss at this point.

Furthermore, it was written when the Sload kingpin under Hlan Oek did not exist, forcing a long introduction of the Noesis Velothi tower (including an escort quest) when that entire bit could be replaced by, for example, a kingpin-run drug den in a cave a bit outside of town.

The artifact, Sanguine’s Lung, is flavorful however, and should already be made.