First the good news: our Spring Release is progressing at a steady pace. 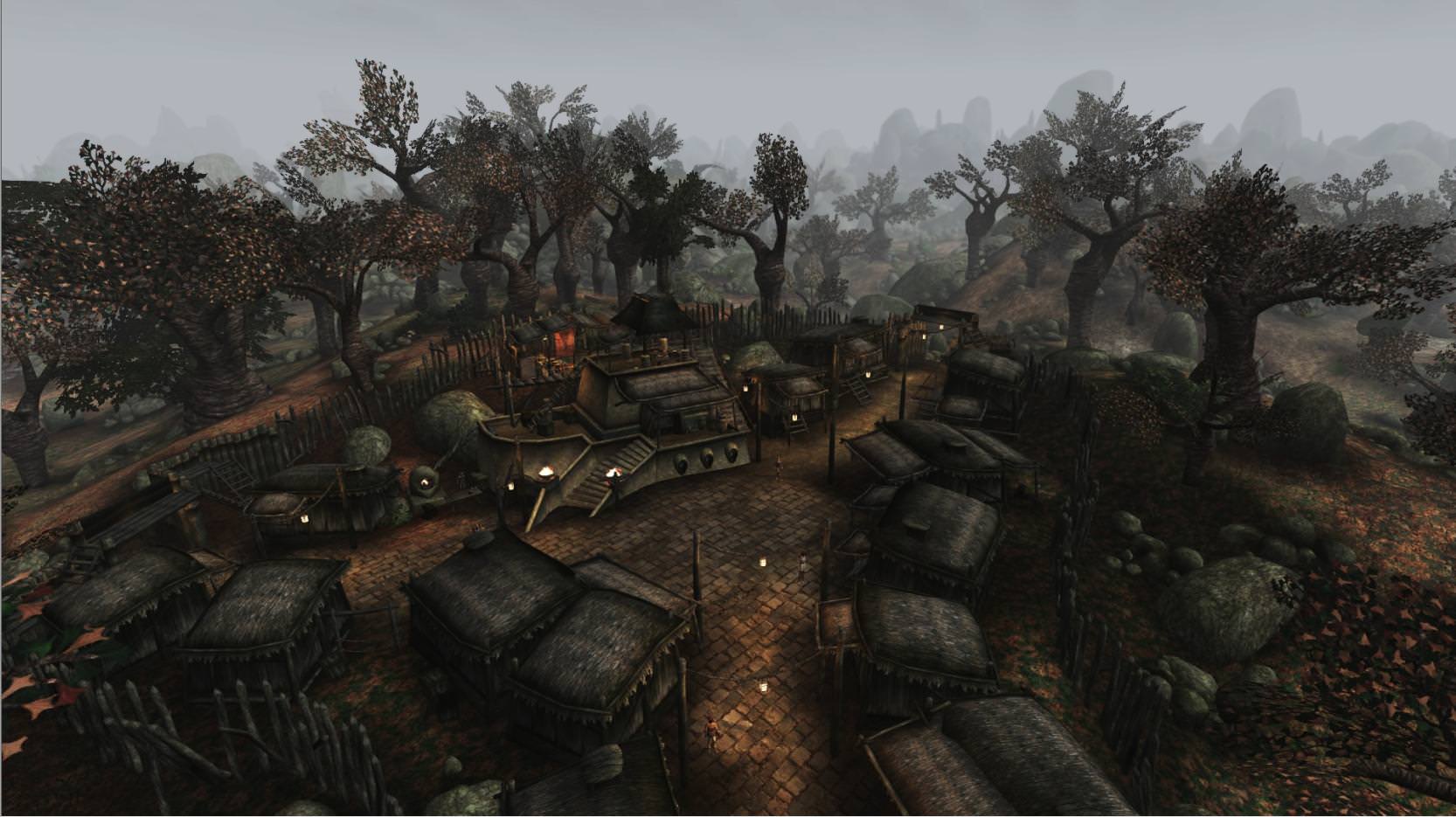 Pretty pictures mean things are going to be alright.

We also want to announce that Tamriel Rebuilt is going to include a fix for a common dialogue bug, by editing a line of vanilla dialogue.

Picture this: your Nerevarine newly vanquished Dagoth Ur, descends from Red Mountain, and goes to turn in some other quest. He approaches a fairly high-level NPC, talks to them to grab the quest reward, but then... 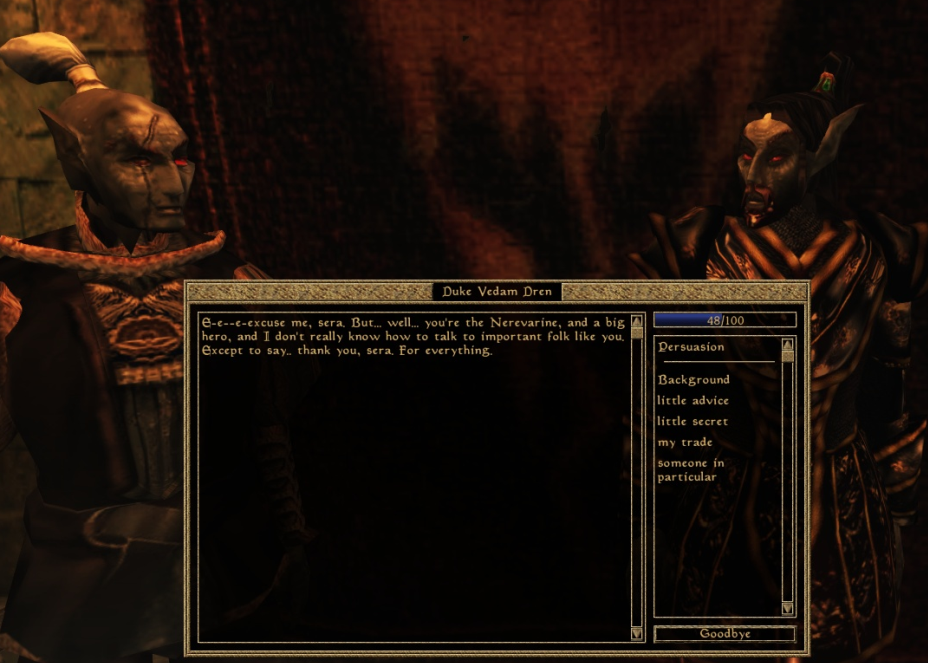 What you have encountered is one of the most annoying bugs in Morrowind.

This fix is adopted in coordination with the province mods, Province:Cyrodiil and Skyrim:Home of the Nords, as well as Patch for Purists.
Who else does anything with these lines?
Aside from the big province mods, this line is mainly edited by bug-fixing patches.
The Morrowind Patch Project (only 1.6.6. was tested) adds the same filter, but also strangely relocates these replies at the very bottom.
The Patch for Purists currently implements a different fix, but its creator Half11 is going to change this to the same filter the province mods will use.

In short: for most players very little will change. For those with an unpatched game (not advisable), an older patch or a different Nerevarine greeting fix, suddenly old replies will reappear.

This change will be made in the next releases of the mods which are dealing with this problem (Tamriel Rebuilt's Spring Release, the upcoming Province Cyrodiil and Skyrim Home of the Nords releases, and Patch for Purists 3.0).

Why is this fix included in TR?
This problem is only fixed sometimes or incorrectly, and any mod that doesn't include this fix can't count on its replies to work after the main quest if they are placed under these Nerevarine greetings. This fix is necessary for the province mods, and the same filter will be applied in TR, ensuring that different fixes do not overwrite each other between the projects. In the future, fixes will also be coordinated for two dialogue topics that are improperly conditioned in vanilla: "Almalexia" and "Solstheim".

How do these greetings work?
Morrowind dialogue editing presents itself as a list of topics with replies. Going from from top to bottom, the first line that satisfies its conditions is the reply you get.

Greetings (the first line of dialogue that you see when talking to an NPC) internally behave exactly the same way, with 10 different "topic" lists, from Greetings 0 to Greetings 9. Whenever you are greeting an NPC, they run down this list from Greeting 0, 1 (related to extremely important quests, like the Vow of Silence) down to Greeting 9 (Location-based) and check each and every "reply" until one meets its trigger conditions.

Until you become Nerevarine. 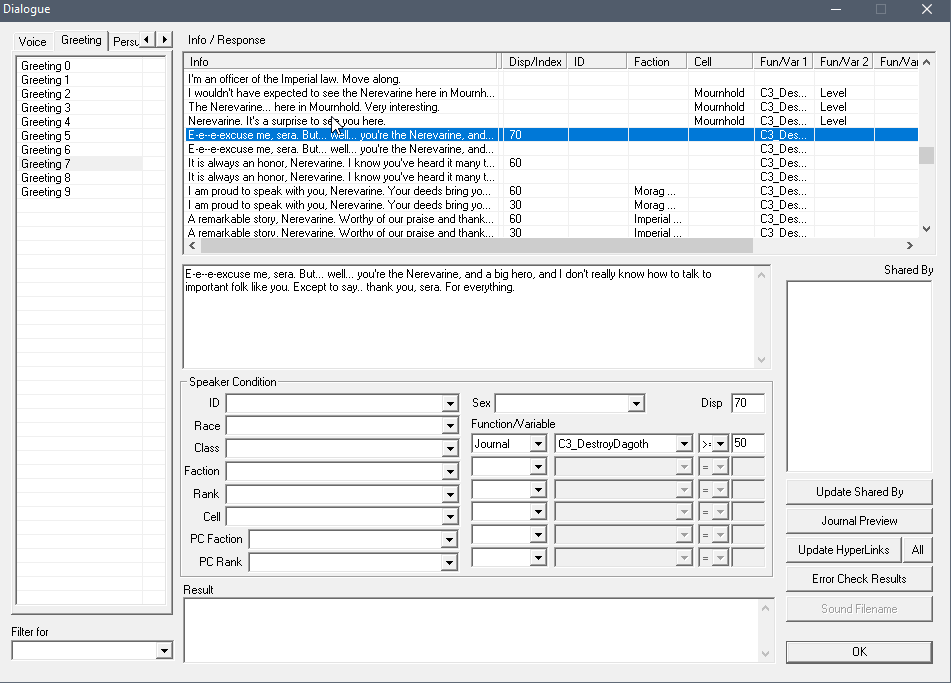 And this is the culprit.

What happens when you advance the main quest by killing Dagoth Ur? These two replies in Greetings 7 do not have any other filter than that very same quest stage, which means they are now triggering every time you speak to an NPC without a proper reply between Greetings 0 and halfway down Greetings 7.
Quests don't precisely break due to this, but you will never see half of the Greetings 7 replies, and all of Greetings 8 and 9 ever again. For a list of which subjects Greetings are supposed to contain in vanilla, please check our handbook.

While this bug is not a problem for most modders, province mods like Province Cyrodiil and Skyrim: Home of the Nords need to add completely new variations to all generic dialogue, including Greetings 8 and 9. 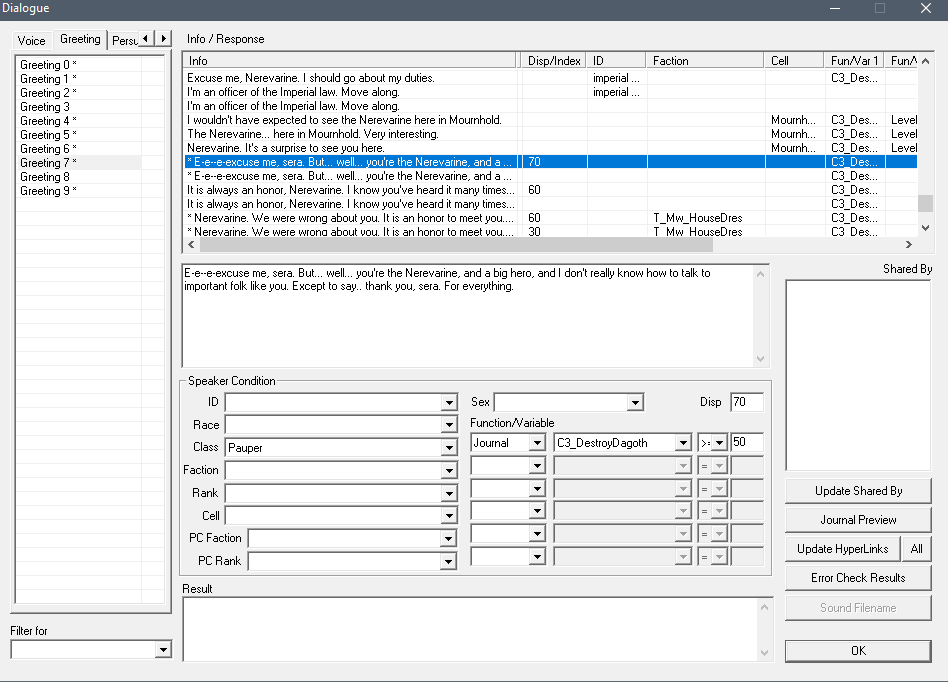 What does this change for TR?
Aside from the benefits to the vanilla game, in TR's current state, regular greetings in Necrom and in the wilderness will reappear for the Nerevarine even in an unpatched game.

In the future, it will make adding dialogue underneath Greeting 7 possible again.

The edited lines will have a comment that warns modders not to create any new dialogue lines straight above them if their new lines are meant to overwrite the Nerevarine greetings. Why? The following example about greeting conflicts illustrates what might happen:

Plugin 1 modifies Greeting 1 "[You have failed your Oath of Silence]" and adds two entries before it:

Plugin 2 adds two entries before that Greeting 1, regardless of whether it "dirties" it or not:

Resulting order when Plugin 1 is loaded after Plugin 2:

The new lines added by the plugin loaded earlier can no longer overwrite the original game's line if they were meant to. Keeping edits away from the positions above the Nerevarine greetings is therefore good advice for all modders, in TR or otherwise, since many mods edit those lines for the same reason.