''Created during the Rift that caused the creation of the Inner Sea; surrounding mountains of the Thirr were split and shattered, causing the river to connect to the Sea of Ghosts. Though its tumbling waters have been tamed by Prophet Veloth during his crossing of the Thirr on his great exodus to the East, its status as the crossroads of Morrowind has made it the focus of a territorial dispute between the Great Houses Indoril and Hlaalu. Divided by an ongoing war between the houses, bound by Imperial trade interests and Temple authority, one thing is clear: Though its waters flow gently and rich soil is abundant, the Aanthirin itself has yet to be tamed.''

The Aanthirin is a large, unnatural landscape dominated by the Thirr River as it flows out of the canyons of Narsis District through Lake Andaram into the Inner Sea. Originally a densely forested highland region, much of the landmass collapsed during the cataclysmic formation of the Inner Sea in the War of the First Council and was further eroded by the flooding of Morrowind during the Akaviri invasion in the second era. It is bordered by the stormy Ascadian Bluffs, the rocky Roth Roryn and the devastated Armun Ashlands in the West, the festering Sundered Scar and lush Alt Orethan in the East, and the salty Deshaan Plains and arid Thirr Valley in the South. The region's picturesque landscape hides the vicious power struggle between the encroaching Great House Hlaalu and the established Great Houses of Indoril and Dres. A center of stability in these troubling times are the Temple holdings, most notably Almas Thirr, a Temple stronghold built where the Prophet Veloth and his followers once crossed the river on their great journey to the East. Its counterpoint is Old Ebonheart, the centre of Imperial power in Morrowind, which sits at the Thirr river delta. 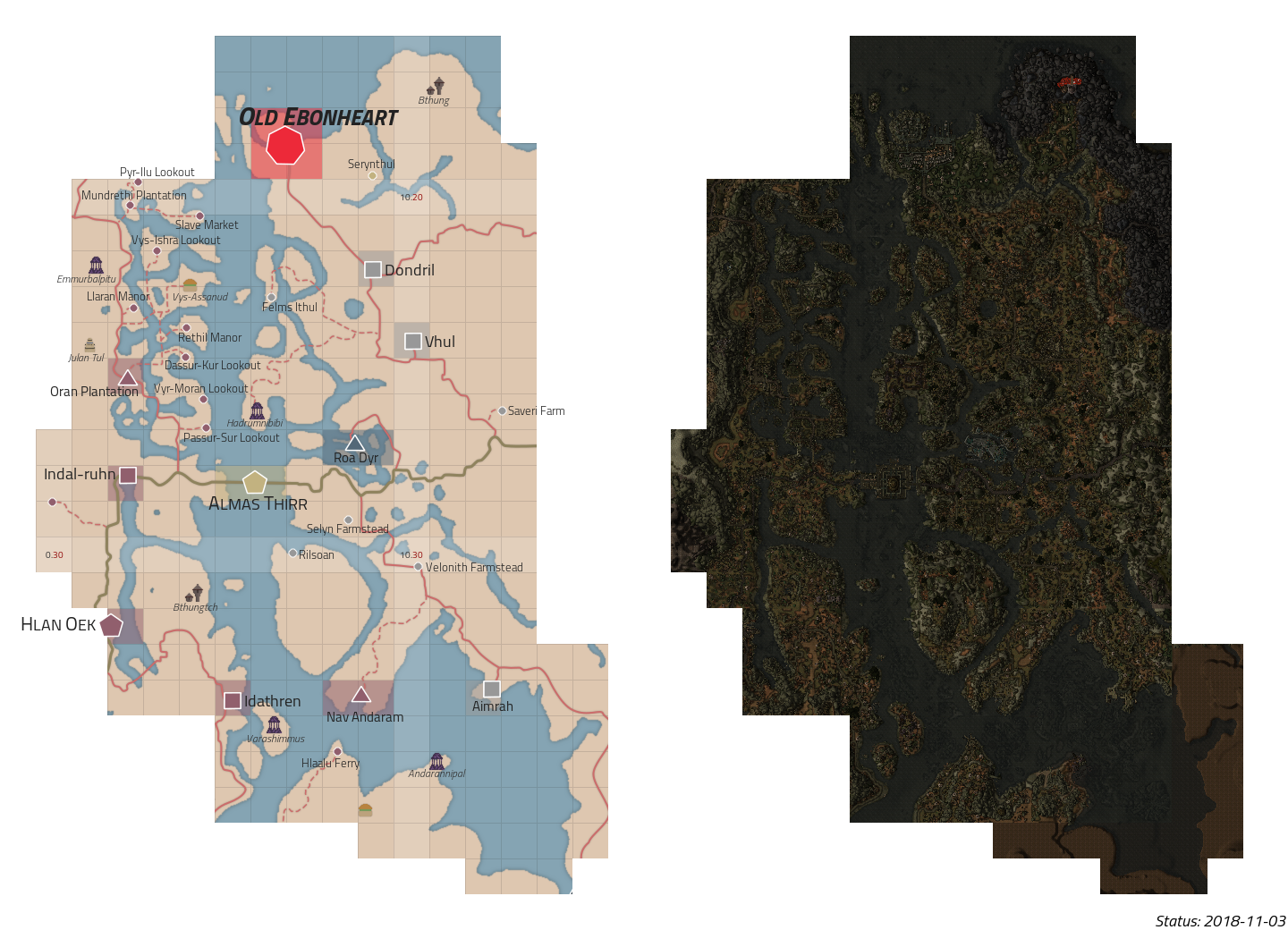 The region used to be a backwater with limited population. The thick vegetation proved undesirable to the Chimer, as their bugherds couldn’t keep an eye on their flocks, farmers found that the soil quickly lost its nutrients when it was cleared for farming, and pilgrims got lost. Aanthirin gained relevance both through benefits brought by its transformation and the loss of more desirable land to sinking and heavy ash fall.

For the Indoril, who were flourishing then and looking to spread out beyond the Orethan, Aanthirin proved to be a promising route of expansion. Devout Indoril established missions beyond the House's border to spread the Tribunal faith and eliminate heretics. Originally, existing structures may have been occupied to that end, as was certainly the case in Old Ebonheart, but over time the missions evolved into the Indoril Chapels. The region was increasingly being enveloped into House Indoril territory.

The Aanthirin flourished during the Tribunate. Imperial scholars would no doubt argue that the relatively light ashfall Aanthirin received from Red Mountain had a positive effect on the ecology of the region, whereas Indoril theologians, ignoring them, attribute the region's success to the wise rule and cultivation of its Indoril lords. Due to its new geographic position, the general political and demographic structure that was beginning to establish itself in Morrowind, and its new-found fertility, the Aanthirin became a very important and prosperous region, a center of production, industry and trade. Velothi towns were established, broad swathes of the region were deforested and replaced by farmland. These were the golden years of the Tribunal.

Then came the Talos Wars and the Armistice. Through a mixture of spontaneous Indoril suicide, aggressive legal and political maneuvering, Imperial support which was variably intentional and unwitting, and local unrest and uprisings, House Hlaalu established its Aanthirin foothold. Some of the chapel-strongholds were destroyed in the process, including Khalaan, which the Empire rebuilt as (Old) Ebonheart, its new seat of power in Morrowind. Inter-house struggles locally boiled over into skirmishes and riots. The population became unstable; most of the Thirr's prosperity came through its political and economic importance, and now that importance was only hurting it.

While Morrowind as a whole came out of the Armistice relatively unscathed, the Aanthirin was the big exception. The Indoril had become too weak to try and fix the region; even without Hlaalu and Imperials transforming it, they were unwilling to acknowledge the changes the Armistice brought and obsessed over the region as it had been, rather than administering it as it was. They started to settle displaced Velothi in aggressively around the region. The Indoril had shack villages built to attempt to regain control over lost territory, erected fortifications (e.g. Dondril) to form lines of defense against their enemies, and have been trying to bend and lobby the Temple, increasingly isolated in its stronghold of Almas Thirr, to take their side in the political conflict.

The Indoril are incapable of making the best out of the Aanthirin. The Temple is incapable of keeping the factions in the region in check, only wearing itself out in the process. House Hlaalu is flourishing and expanding. The Imperials are trying to retain their foothold and not be dragged into local conflicts in the Thirr. The Aanthirin and Morrowind have already fallen far from their former prosperity, but continue to have an economic and political importance far greater than their rather inhospitable appearance would suggest.

The Aanthirin is an insignificant region that was thrust into the center of attention, but suffers cataclysm after cataclysm, much like Morrowind itself. It was vibrant and new for a while, but is now showing signs of age. It could be seen as the core of Morrowind; the hearth. The hostile home made welcoming, soon to become hostile again.

The main geographic feature of the Aanthirin is the river Thirr, which flows through the region. Near the river shores, small islands dot the landscape. In the north, the river flows into the Inner Sea, ending in a river delta. The river basin is bordered by mountain ranges on both sides, separating the region from Roth Roryn and the Armun Ashlands in the West, and from Alt Orethan and the Sundered Scar in the East. To the South, the climate becomes increasingly arid, and the region transitions into the Hlaalu-held Thirr Valley, and the Dres-held Deshaan Plains.

In the south, Lake Andaram dominates the landscape. Before the creation of the Inner Sea, the Thirr's waters gathered in the lake, from where they flowed into the Salt Washes below the Deshaan and evaporated. The river's slow pace has allowed this now vestigial outflow to remain. Around the lake and edges of the region the landscape is rockier with more hills. The center of the region becomes considerably flatter north of Almas Thirr.

Lake Andaram is a border between House territories, and a focal point of conflict. House Hlaalu, more interested in economic gains than political borders, are trying to get a foothold on the northern banks of Lake Andaram to contest Indoril Hegemony and end up blundering into a fight with House Dres, who don’t appreciate the competition. Usually, Hlaalu and Dres are reliable, mostly compatible trading partners and the Hlaalu are savvy enough to not step on the Dres’ toes. The establishment of Nav Andaram (the mainland Hlaalu player stronghold) is as such a serious diplomatic stumble, with the player caught in the middle.

While the region is mostly safe, it does harbour a number of bandits and smugglers, mostly on the Hlaalu side, who harass merchants and circumvent Temple tolls and inspections at Almas Thirr, as well as a few wild animals that harass farmers and pilgrims. While most of the region's ruins pose relatively little threat, Hlaalu disinterest and Indoril preoccupation has allowed some dangers to go unnoticed.

The Aanthirin is a prosperous region, a center of production, industry and trade. The roads are well maintained, especially Veloth's path, the main pilgrimage route to Necrom, that goes through the region and crosses the river at Almas Thirr. Fast travel options include boats along the river and silt striders for inland destinations. There are ferry connections between the plantations and across Lake Andaram.

The eastern bank in mainly controlled by House Indoril. The settlements are:

The western bank is completely controlled by House Hlaalu. The settlements are:

In the south, Lake Andaram is split by the houses Hlaalu, Indoril, and Dres. The settlements are: