Moonlight filled the soundless night, as Masser's red body reflected off the calm waters of Lake Coronati, and the soothing yellow of the Valley seemed to grow more hostile with each passing minute. The letter had to be delivered by dusk. The path I'd taken since the ferry stretched out alongside the shore of the lake, and the famous giant mangroves of the Valley covered it like a blanket. I crossed the bridge, only to fall transfixed by an extraordinary sight. Ahead, the mushrooms below the mangroves shone with an alien blue light, and a chilly fog clung to the ground. The pink lilypads on the puddles seemed to wait eagerly to see the sun again. This was what made Resdayn different from other places; one could travel the whole province and never run out of things to be amazed by. While I stared at this spectular sight, I didn't realize I had finally reached my destination. Beyond the hill to the left, there she rose with all of her glory; the capital of trade and schemes, Narsis, stood magnificent before me.

Thirr Valley is a broad open region comprising northeastern Narsis District that surrounds the Thirr River as it makes its way north toward the Inner Sea. It's bordered by the great cliffs of Shipal-Shin in the South, the salty plains of the Deshaan in the East, the mushroom forests of Othreleth Woods in the West and the lush landscape of Aanthirin to the North. At the center of the region there is the great Lake Coronati, a center of trade and commerce. Due to its rich soil near the mangrove dominated river banks, various plantations dot the yellow landscape of the region. 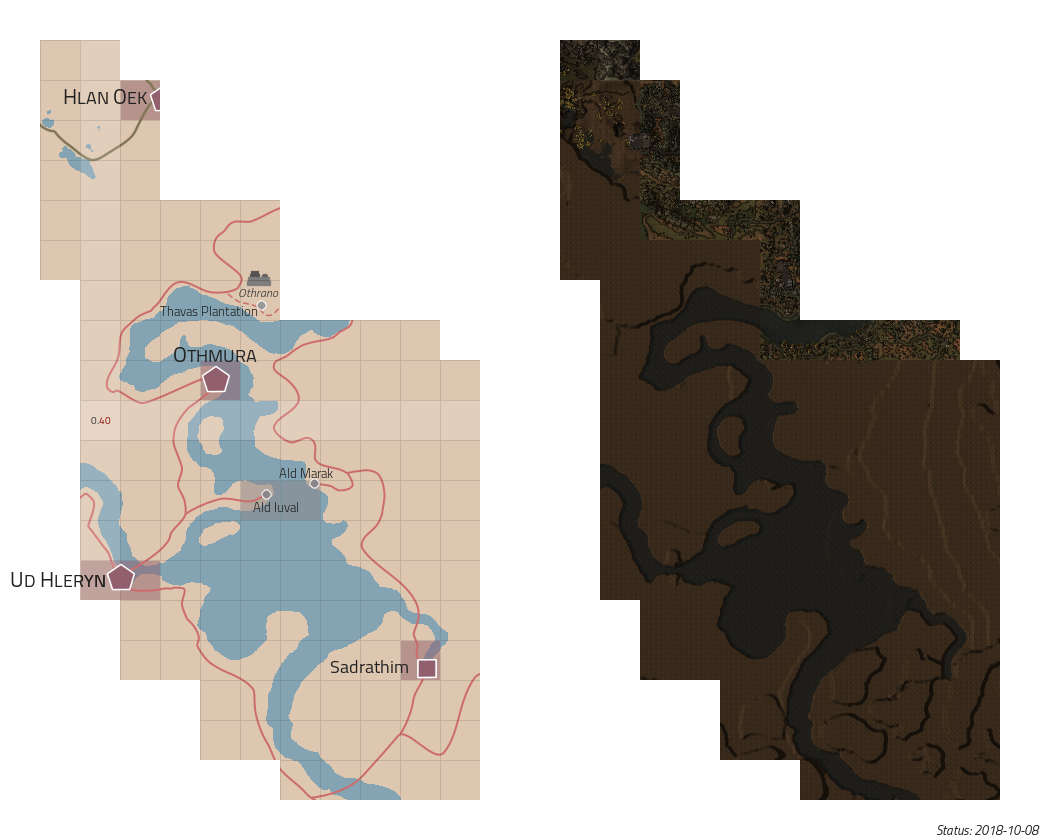 The Chimer settled Thirr Valley early, the region stretching out southward from the path Veloth followed through Morrowind, and its grass cover with sparse vegetation being well-suited to herding. While there was better farmland to be found further north, where the main population centers developed, Thirr Valley supported a few relatively docile clans.

When the yoke of Skyrim's First Empire fell on Morrowind, Thirr Valley's southern position and sparse settlement largely spared it from the attention of the invaders, the burden of occupation falling more heavily on the more abundant regions of Morrowind. Thirr Valley saw an influx of dissident clans and outlaws dissatisfied with foreign rule. These newcomers were quick to join Nerevar in his uprising against the Nords, and then again against the Dwemer, and were also at hand when House Redoran was formed, ready to continue protecting Morrowind in the times to come.

However, these warrior clans experienced the same decline and loss of purpose as most of House Redoran in the millennia of almost unbroken peace that followed, though to an even greater extent due to their distance to Morrowind's border. While their ties to House Redoran had originally been strong enough to withstand absorption by the expanding House Indoril, they weakened over time as the idle warriors settled in to a secluded life of farming, herding and fishing. Only their waterside strongholds such as Ald Iuval and Ald Marak continued to serve a concrete purpose, keeping the waterways safe of pirates and other threats.

By the time of Reman's invasion at the end of the first era, most of Thirr Valley was only Redoran in name, but the clans nonetheless were quick to rally to the joint banners of House Redoran and House Hlaalu to defend Morrowind once more. The reaffirmation of house allegiance did not last after the threat was gone, as the clans returned to their homes which had been devastated in the war and started rebuilding them. In that time, a strong bond was established with House Hlaalu, which had formed after the War of the First Council for the sake of rebuilding the destruction that conflict had left in its wake, and now set about doing the same after the destruction brought by the Four Score War.

That uncertain state of affairs continued through the second era, as Hlaalu profited from peace with Interregnum Cyrodiil but maintained its limited territory near the passes, and the local Redoran were mostly concerned with protecting Hlaalu merchants and simply subsisting. As soon as Cyrodiil recovered from its instability and a new human empire once more threatened the borders of Morrowind, matters came to a head. The demoralizing destruction the Thirr Valley clans had witnessed fighting alongside their Hlaalu cousins, the following period of peace and prosperity, the reluctance of the eastern houses to help defend western Morrowind in the event of another invasion and the ineptitude of House Redoran after centuries of idleness caused them to dread a renewed outbreak of war. While some clans readied themselves for a hopeless struggle, others joined House Hlaalu in advocating accommodation, leading to deep internal rifts.

The declaration of the Armistice set a major shift in motion almost overnight. Thirr Valley had become a powderkeg, uncertainty and bitterness hanging in the air as the clans advocating accommodation were tarred with the same traitors' brush as the Hlaalu while clans advocating resistence were deprived even of an honourable death. No longer seeing value in their nominal union with Redoran, many of the former switched allegience to House Hlaalu. A flurry of duels, sanctioned assassinations and outright brigandry followed, but the outcome swiftly became clear: the clans sympathetic to Hlaalu had the full power of that house and the Empire behind them, whereas their opponents were isolated, other Dunmer either being unwilling to stick their necks out or simply being preoccupied with their own struggles. The fortresses of Ald Marak and Ald Iuval remained neutral in the conflict, focusing on their duty of keeping the waters of the Thirr safe, seeing no value in sectarian bloodshed after the Armistice had already been signed, and were ultimately left alone.

While the remaining Redoran territory in Thirr Valley continued to dwindle in the following centuries through Hlaalu maneuvering and shifting allegiances, the conflict cooled and borders settled into their current form as Hlaalu, the clear victors, focused on their economic pursuits. Trade once more flowed freely along the Thirr, guarded as before by the twin Redoran strongholds, now joined by Hlaalu toll stations. Plantations and ranches emerged on the shores of Lake Coronati and began spreading inland, and sleepy coastal towns grew on the waterfront as the local clans, now aligned with Hlaalu, once more found peace, but also a new level of prosperity.

Thirr Valley is a roughly bowl-shaped region, bound on most sides by higher elevation and dominated by Lake Coronati at its center. It is at Lake Coronati that the Kanit River that flows eastwards through the Othreleth Woods merges with the Thirr as it flows north from Narsis. The edges of the lake are shallow and choked with mangrove parasols, and the relatively rich soil on its shores provides space for a number of plantations. The soil quickly dries out and gives way to grassland further from the lake, however, and as it slopes upwards becomes increasingly rocky and cut by low cliffs.

The mostly arid yellow landscape of Thirr Valley forms a transition between the thick green-orange vegetation of Aanthirin to the north and the dense orange and brown fungal growth of Othreleth Woods to the west, as well as the red desert canyons of Shipal-shin to the south. It is shielded from the Armun Ashlands to the northwest by a stretch of highlands and tall mountains, and lies in the shadow of the Deshaan plateau, looming to the east.

The region's relatively modest population is mostly concentrated in the towns and plantations along the waterways, thinning out from there with the vegetation until, at the edges of the region, a few scattered ranches give way to brigands and outlaws, who especially plague the northwestern highlands where Veloth's Path curves around the Ashlands. The Redoran towers of Ald Marak and Ald Iuval flank the Thirr River where it exits Lake Coronati to the north, and a few scattered Redoran structures throughout the region serve as a reminder of the house's former control of the region. Despite the remaining presence of House Redoran, however, the region is a peaceful backwater largely uninvolved in the political struggles going on around it.

Aside from the peripheral bandits, the region's dense mangrove swamps and grottos harbour a variety of monsters and outlaws, including swamp trolls and escaped slaves. For outlander merchants, however, the occasional muggers, swindlers and cut-throat traders present a more immediate concern, and non-Dunmer tend to find the region unwelcoming, preferring to stick to their boats and caravans as they pass swiftly along the major trade routes.

Despite being crossed by Veloth's Path in the northwest and some of Morrowind's most important waterways, Thirr Valley is mostly a backwater. Most travel within Thirr Valley is by boat, though silt strider services provide transport along the western edge of the region and guild guides can be found in Idathren and Othmura.

Thirr Valley contains the last bastion of the Redoran Waters March. Beyond a few scattered Redoran, its settlements are:

Most of the population live in coastal Hlaalu towns:

The region also contains many small plantations and ranches.