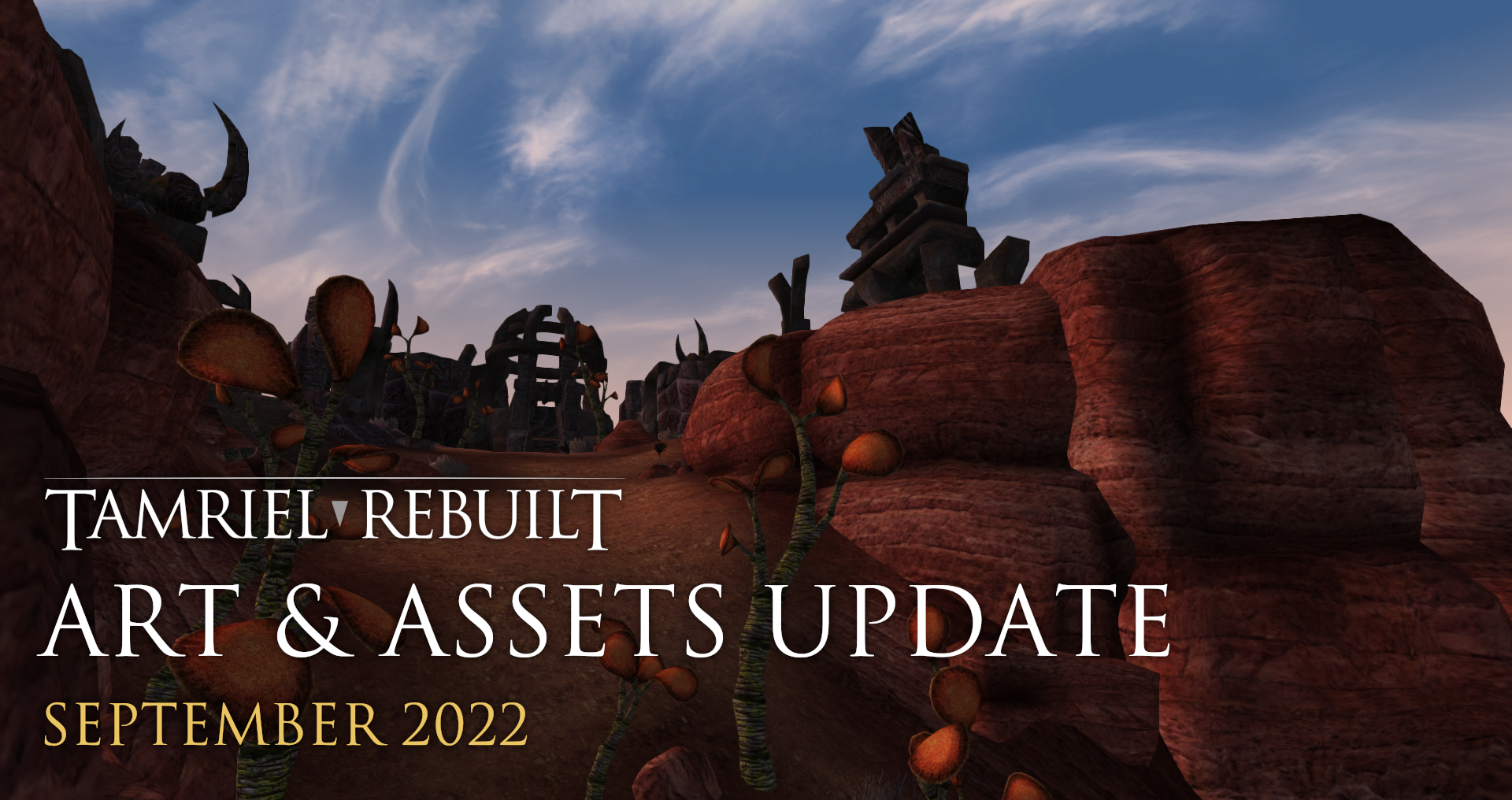 Welcome to another development diary for Tamriel Rebuilt – the massive mod for TES III: Morrowind that adds the mainland of the Morrowind province to the game world, in accordance with the lore and vision of TES III. Currently, roughly half of the mainland area, along with 360 quests, is fully completed and released to players.

We have not been idle over the latter half of Summer and have much to show, as our developers are busy putting together the last bits of our upcoming expansions.

You might notice, however, that this news post is titled “Art and Assets” – our quarterly progress reports grew to such an unwieldy size that we decided to split them into two distinct newsletters. This one will focus on concept art and assets, the first half of our development pipeline, whereas the second one will feature progress on exteriors, interiors and quests, which form the final part of the pipeline. Going forward, we hope to publish the second part of the newsletter next month, then reserve November for a more focused content teaser, and repeat the whole cycle starting in December.

With that past us, let’s see what our artists and modellers have been up to since the middle of July! As always, beware of spoilers when clicking the links and bear in mind that many of the linked pages don’t represent the current or eventual state of the assets. 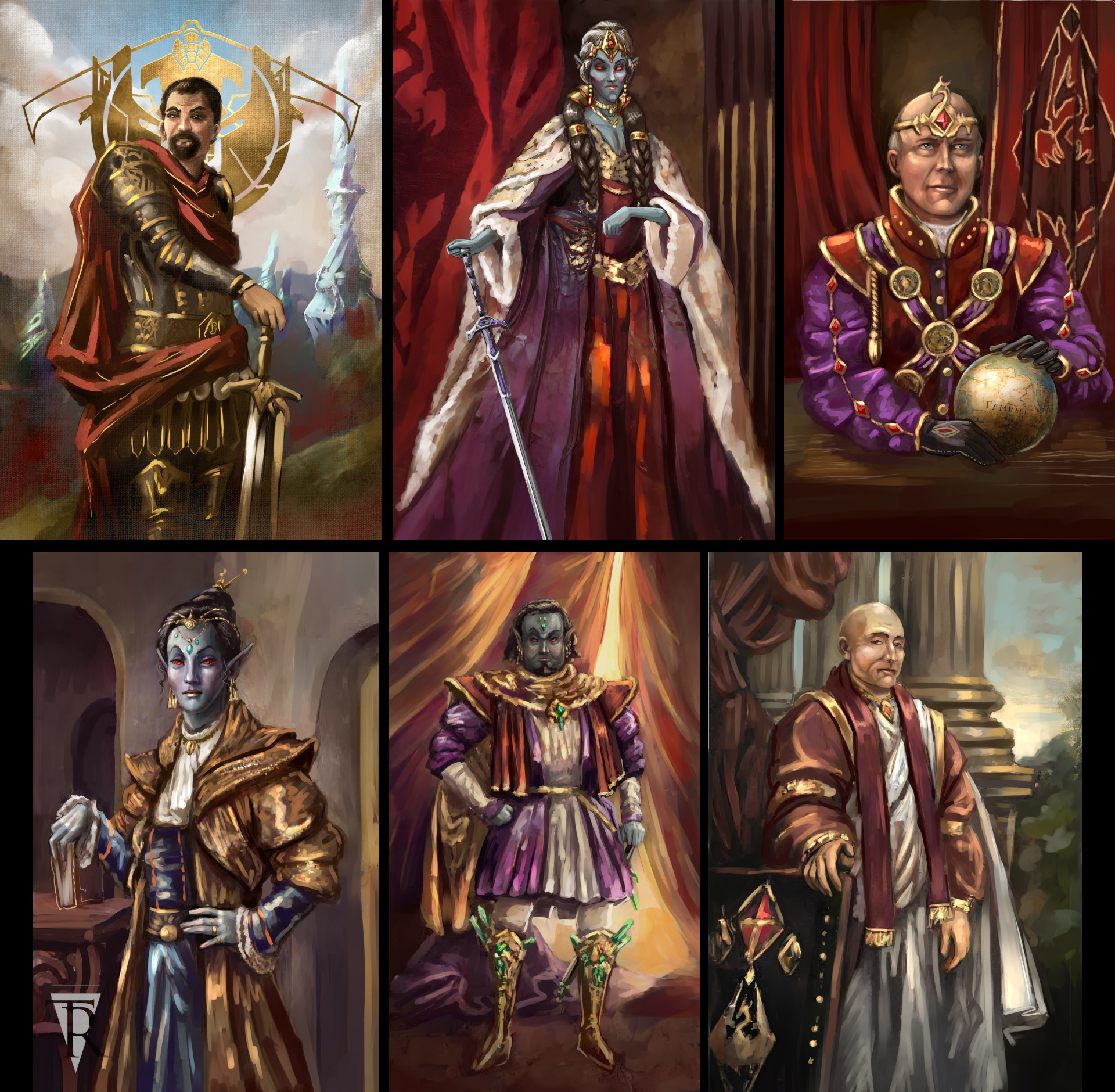 A variety of portraits by Feivelyn, to be featured in rich Hlaalu and Imperial households throughout Narsis district. From top left, clockwise: Tiber Septim (featuring Alinor and the Numidium in the background), Empress Katariah, Uriel VII, the Imperial proconsul of Morrowind, kingpin Hlaalu (name t.b.d.), and Duchess Vormothah (a.k.a., the queen of Narsis in TES I: Arena).

Further concepts by Feivelyn of the scarab featured on Redoran tapestry and Dwemer motifs and of an ostentatious golden glass armor set, conceptualized by public demand after the boots first featured on kingpin Hlaalu’s portrait. 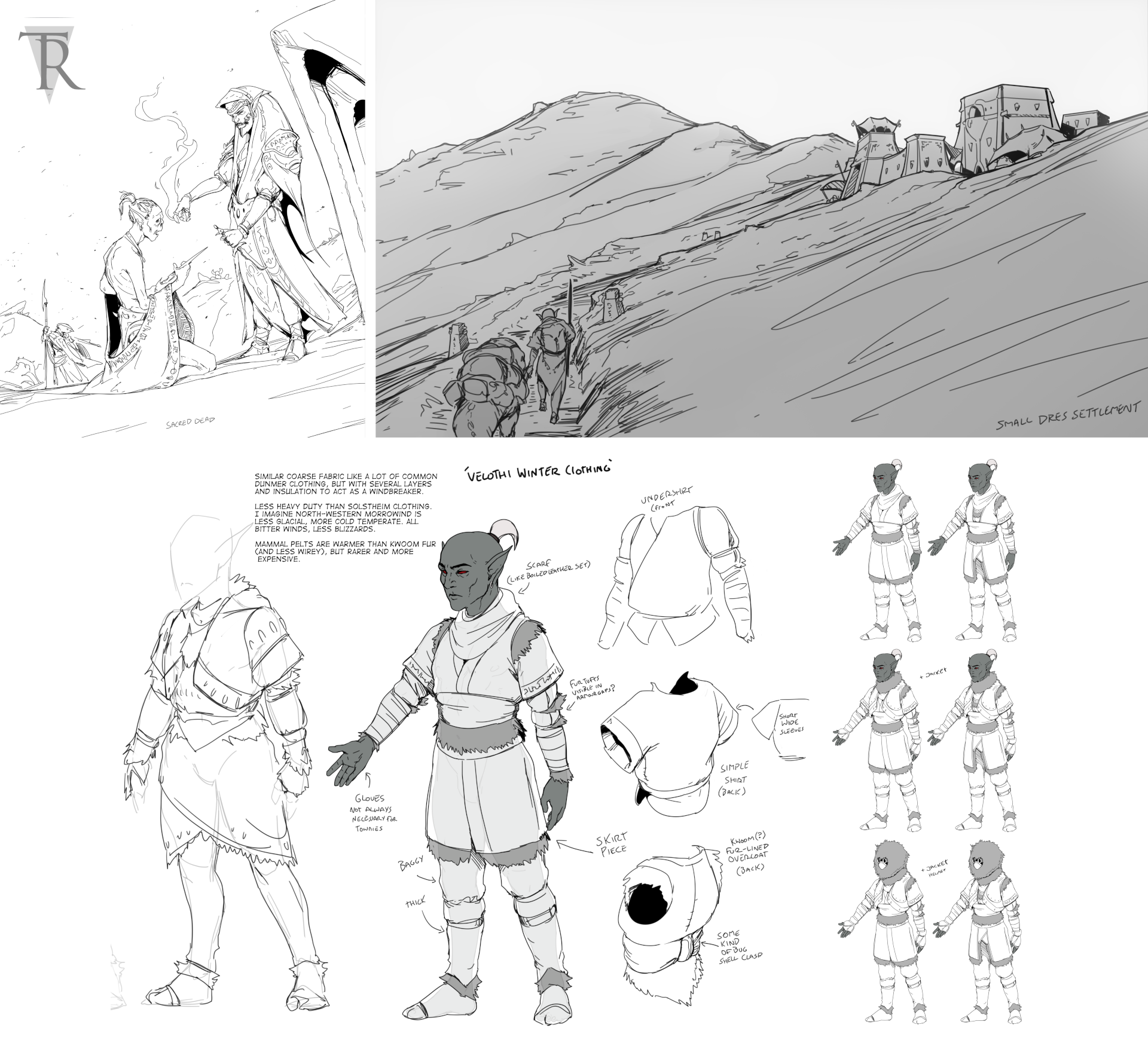 Scenes of Dres life (top) and a new Redoran clothing design for the cold Velothis district (bottom) by Jadony.

Redesigned and colored concepts for Nordic leather armor by Aldegro.

Shadowhawk’s detailed tradeship concepts for the Nords and Bretons. TR’s many port cities are sorely in need of ships to represent factions other than the Dunmer or the Imperial navy. 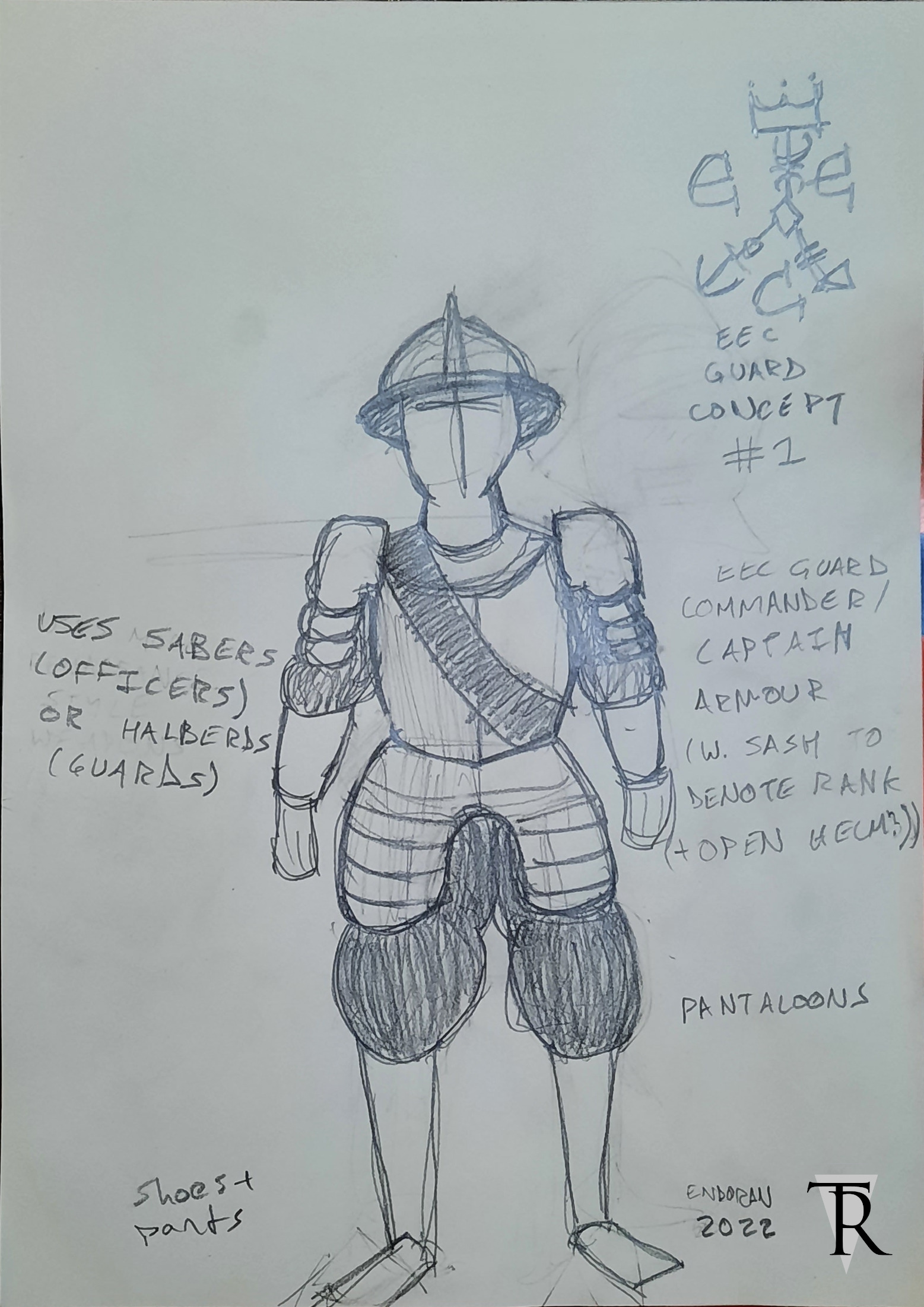 Endoran’s East Empire Company mercenary armor concept for a personal project, which could possibly find use in TR as well. 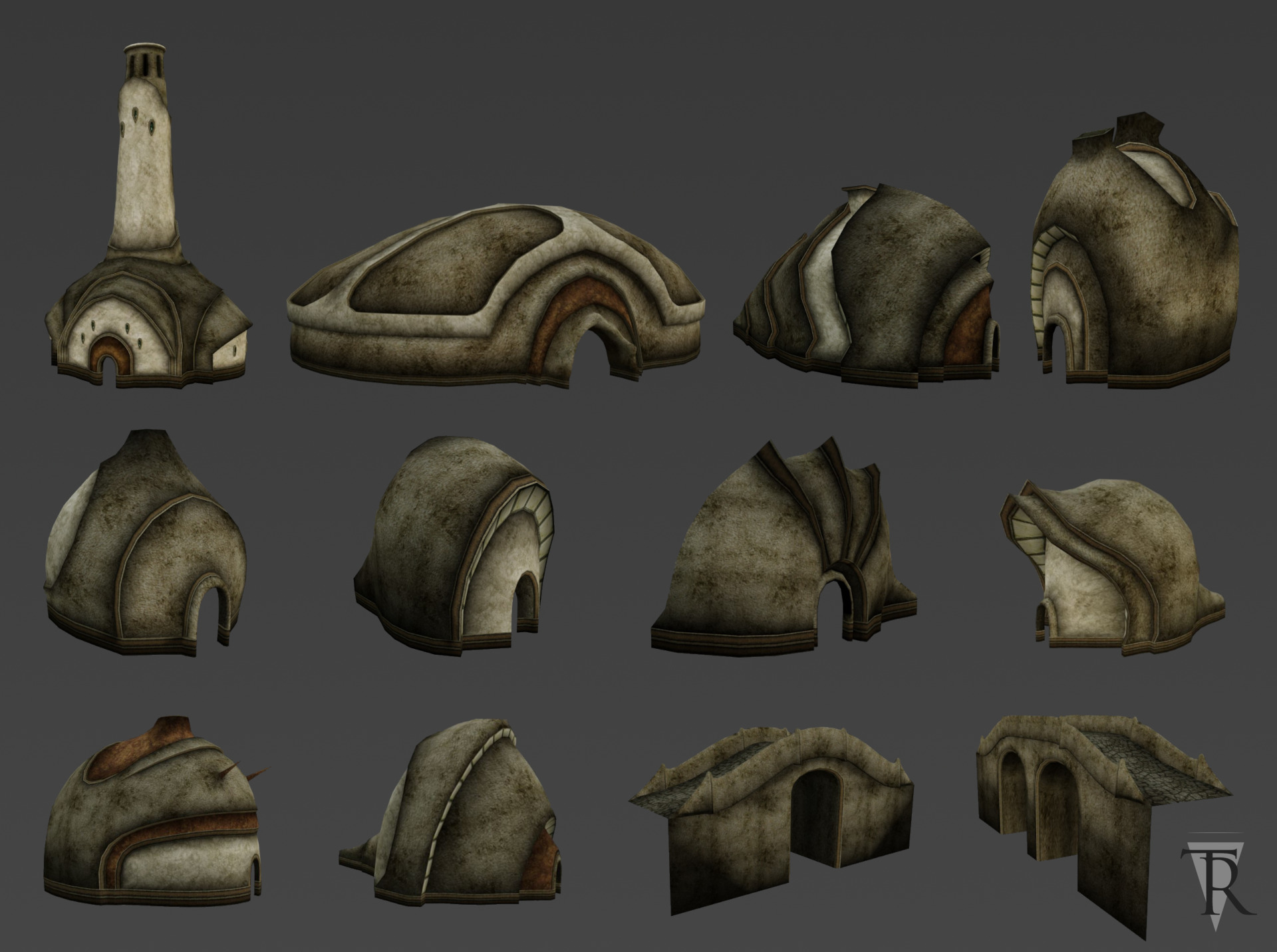 Some of the many Redoran buildings and assets recently created by shivatheo. 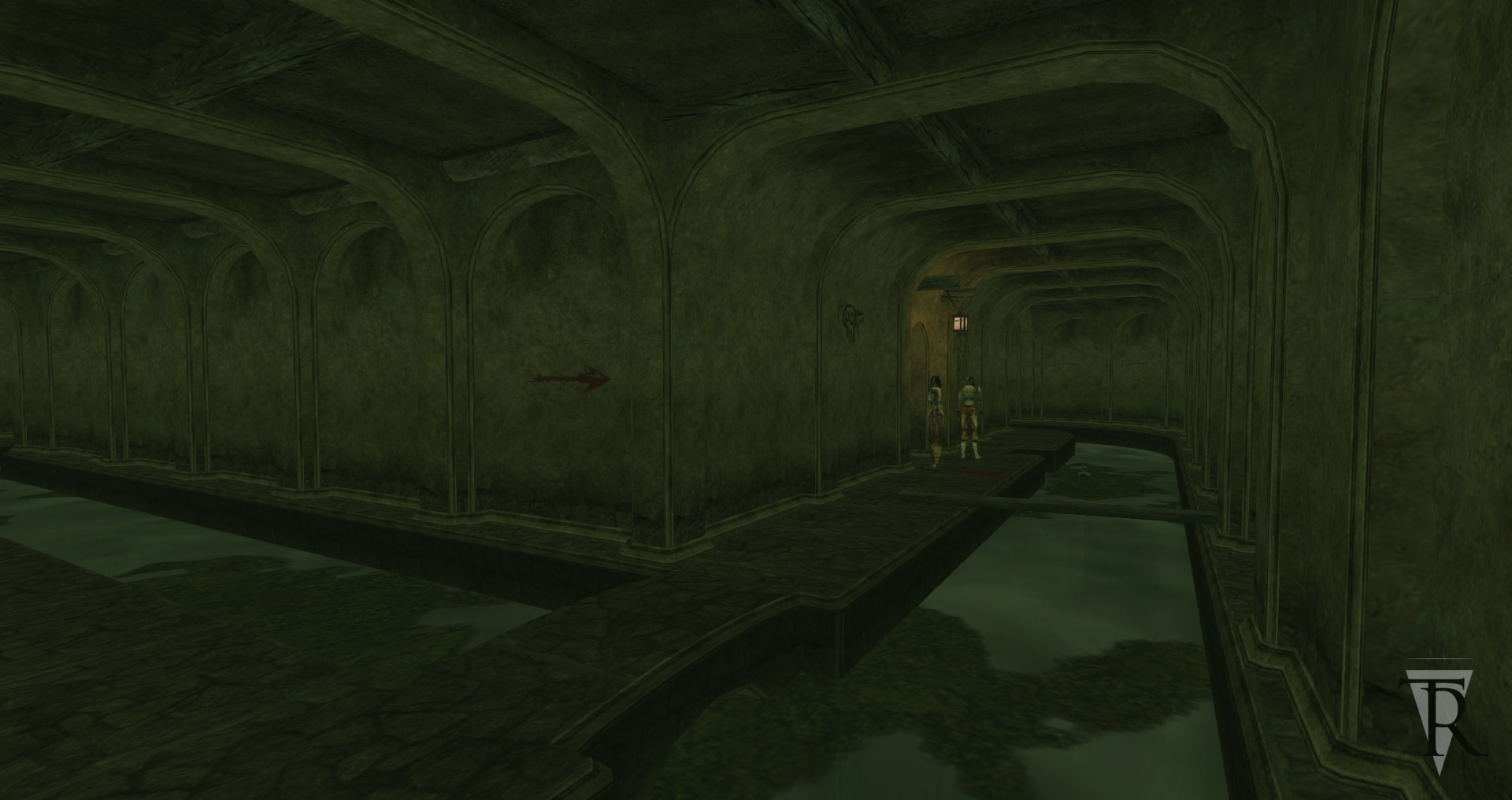 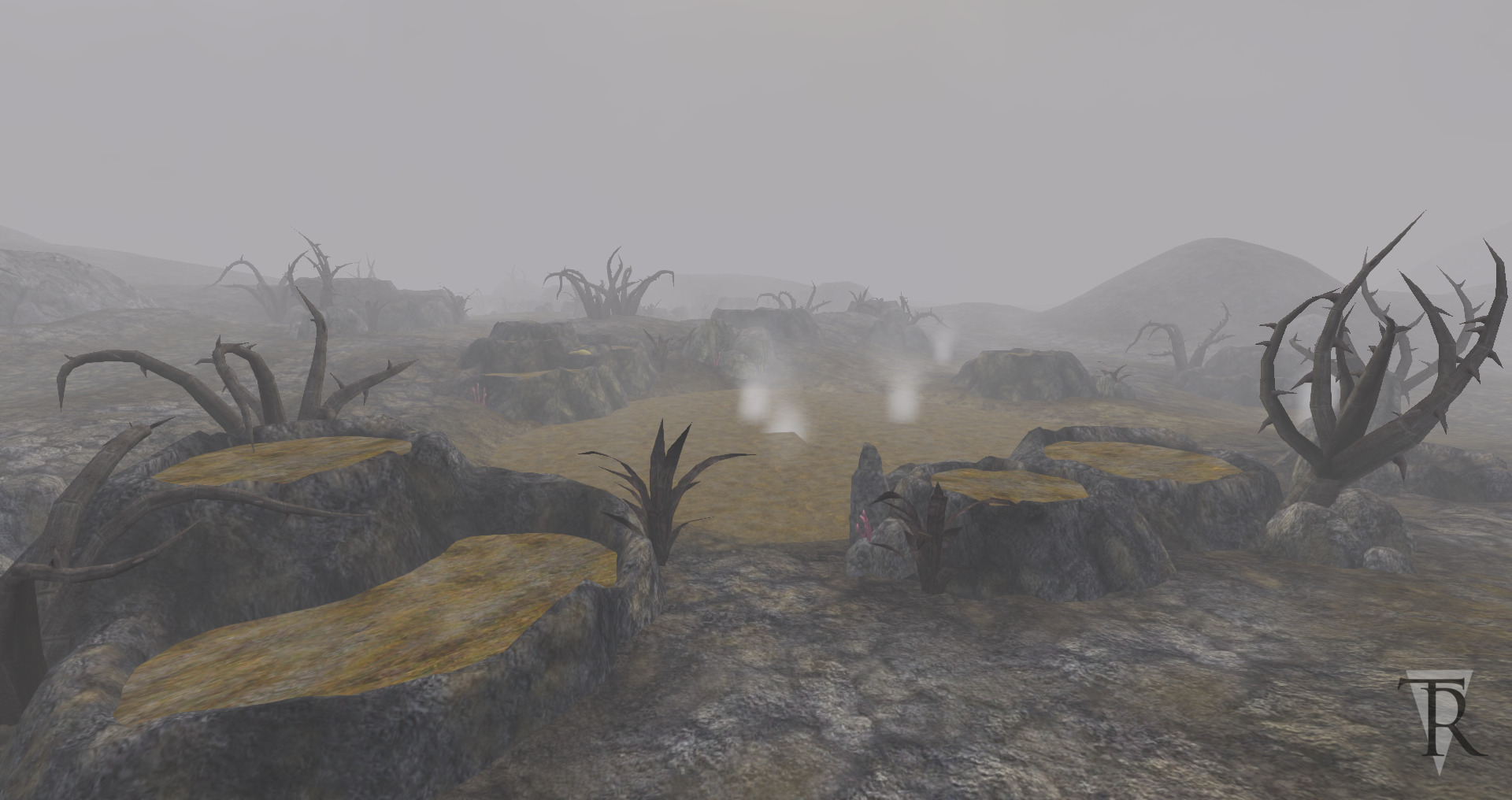 This deadly fungus by S’wit, to be featured in the Othreleth Woods, will gladly consume all flesh it comes upon. 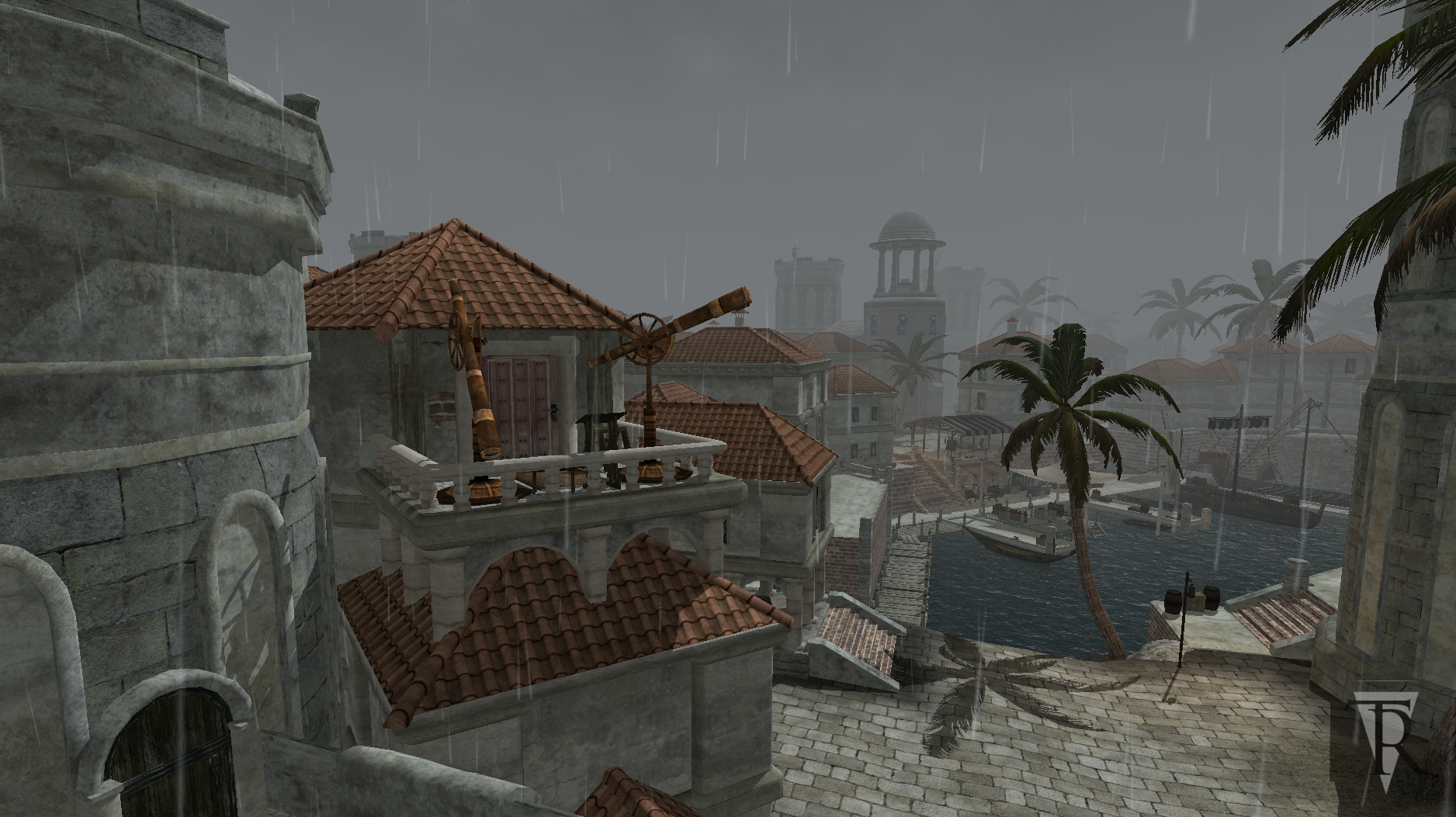 joanasc’s new telescopes featured on the balcony of the Astrologists Guild in the upcoming city of Anvil from Province: Cyrodiil. Screenshot and exterior placement by Taniquetil.

A new rug by Hemaris. Left: HD texture, right: ingame screenshot of the SD version of the asset next to other small rugs from vanilla. 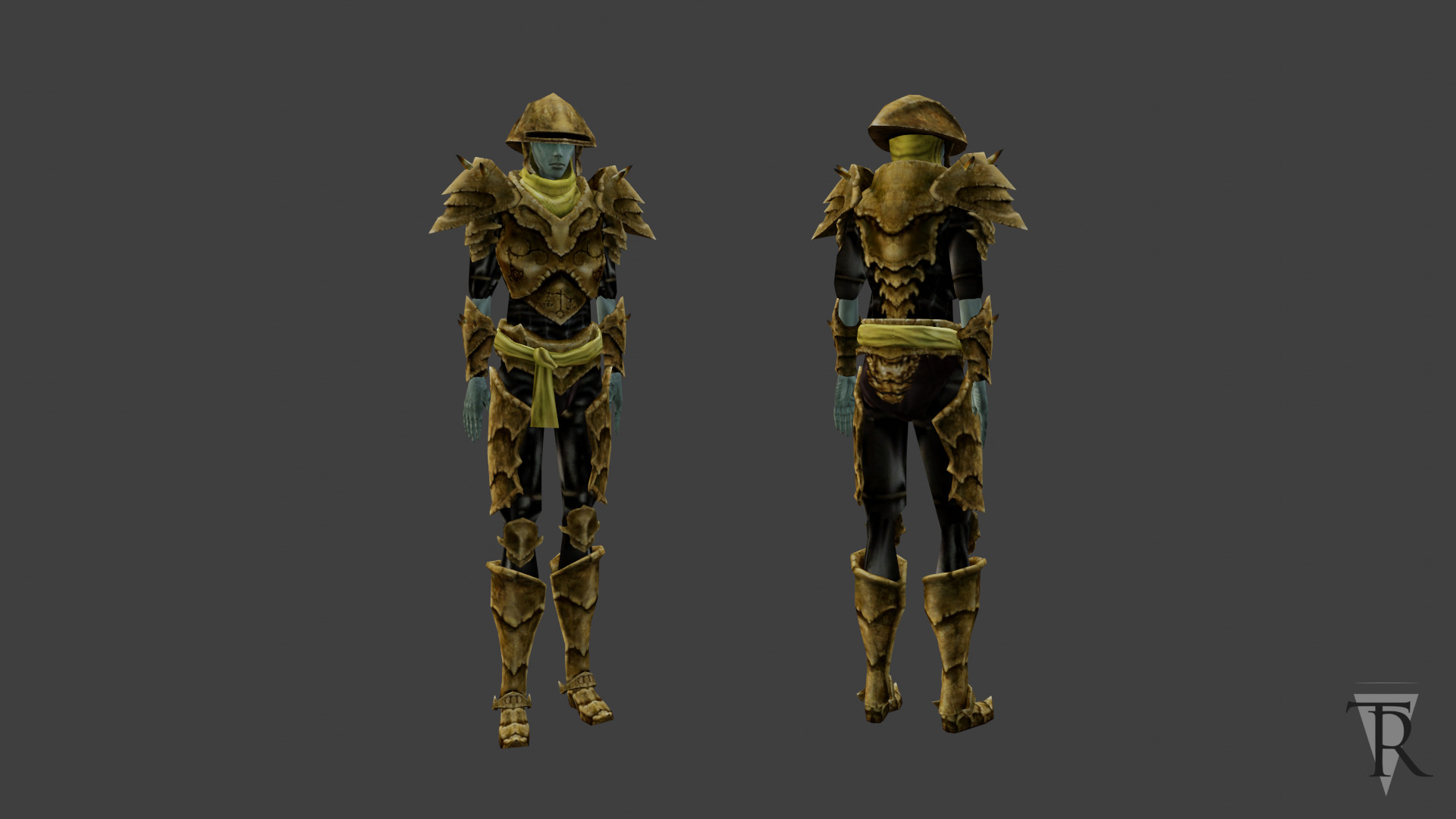 Hlaalu Canyon Watch armor by VenuSprout. This armor will soon be seen on Hlaalu guards in Andothren and the Roth Roryn region. 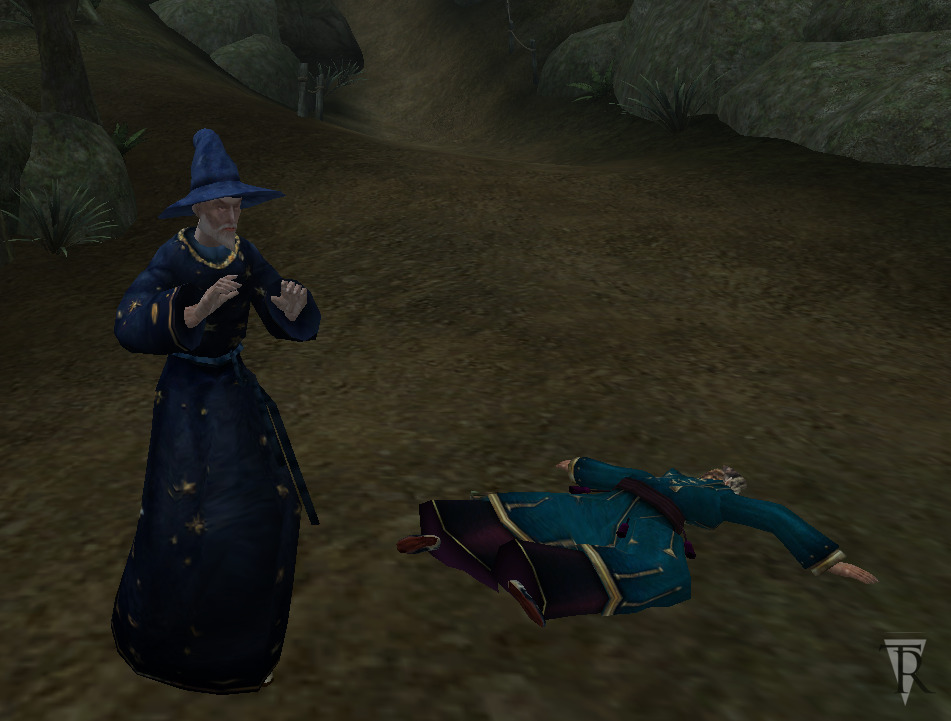 c0dacan0n, standing victorious on the mangled corpse of Tahriel, puts on their wizard robe and hat. 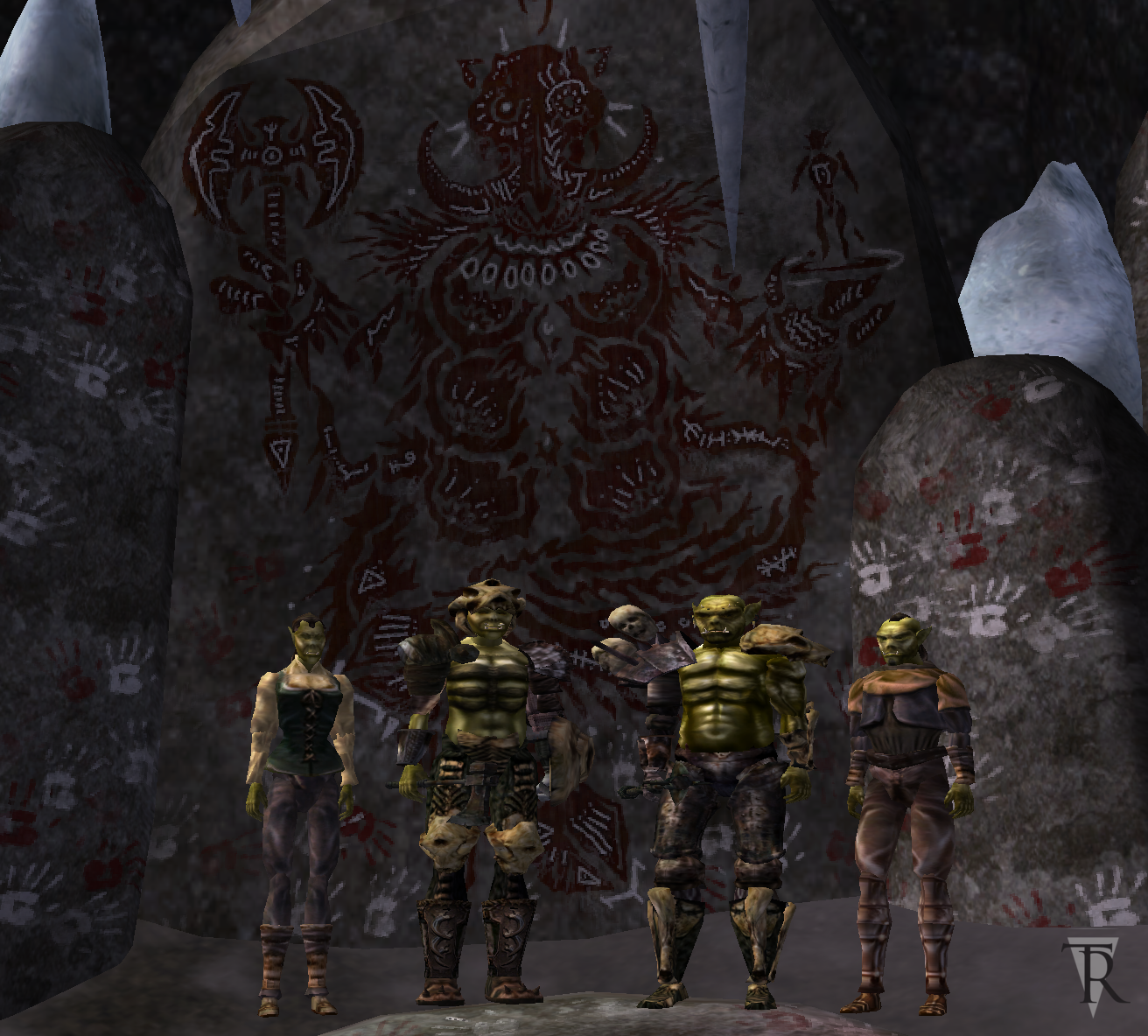 The Malahk orcs (in the middle) finally received a new coat of paint by VenuSprout and Why. Barring any last-minute unique face textures, these are now ready to go. 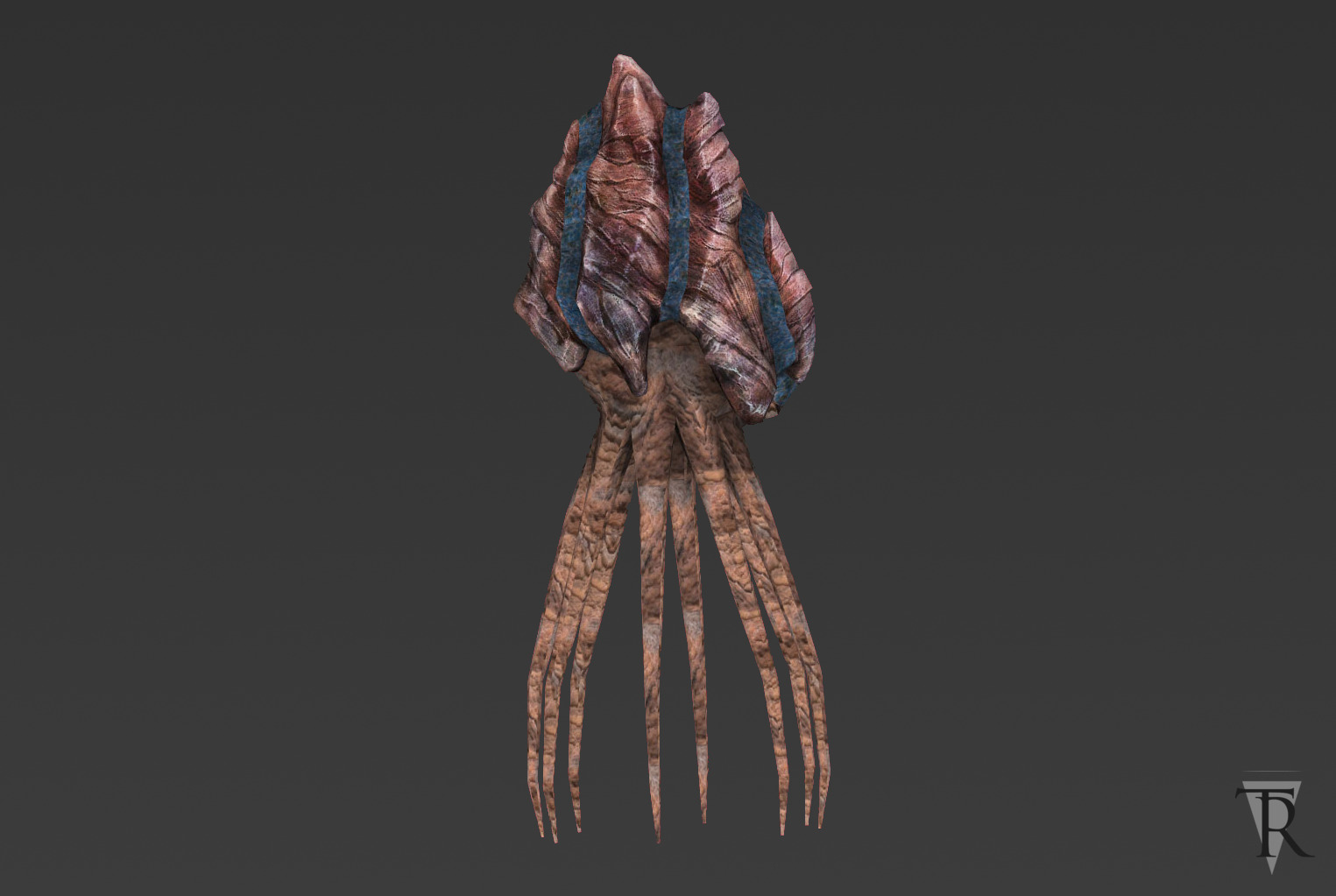 This is it for art and assets in these past two months – not a bad haul by any stretch! Next month, we will dive into the progress in quests, interiors and exteriors, and let me tell you, there will be a lot to cover! Our next expansions are now truly in the final stages of development. As always – if you want to come chat with us or follow our progress more closely, check out our Discord server, where we develop the mod in the open. And if you wish to help us bring mainland Morrowind to life faster, please come join us as a developer – we are always looking out for volunteers of all stripes. No prior modding experience needed!

To leave you off, take a look below at this wonderful tongue-in-cheek collage made by Shadowhawk, depicting many of the current Tamriel Rebuilt developers with their various quirks. Don’t you just wish you were one of them? 😉