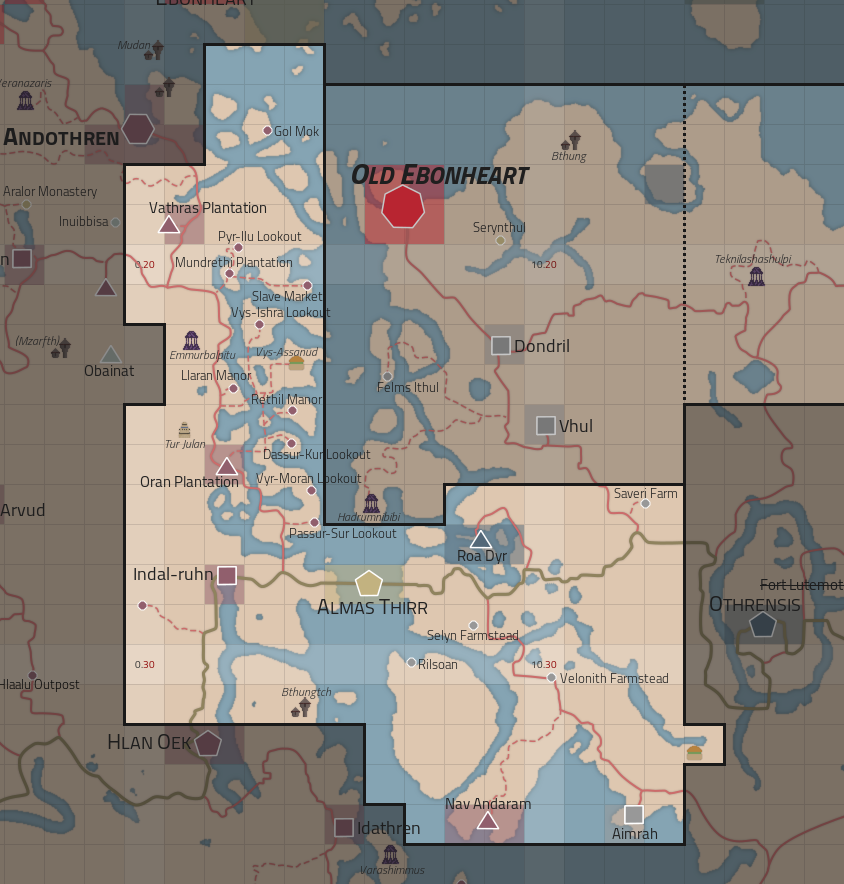 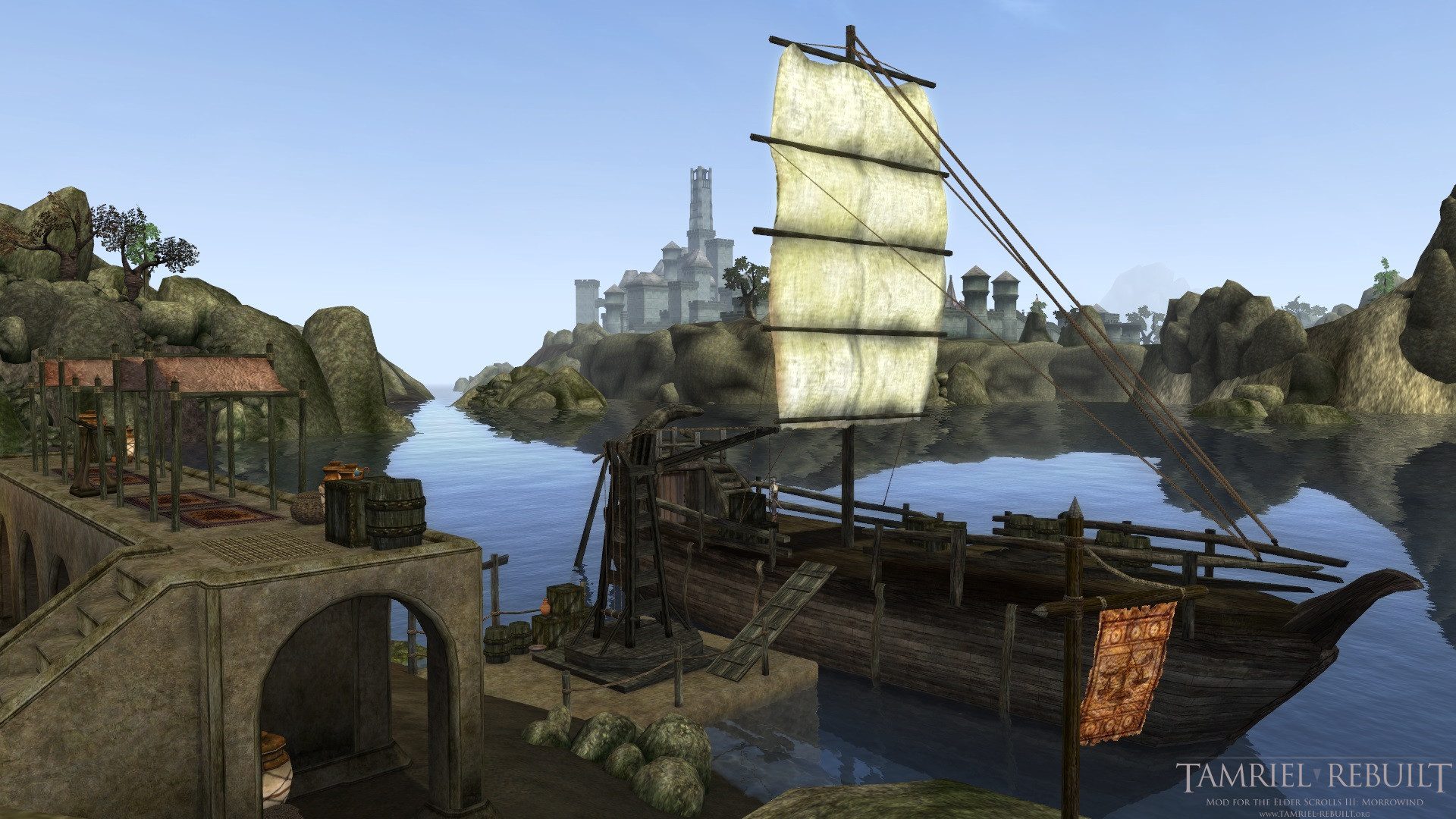 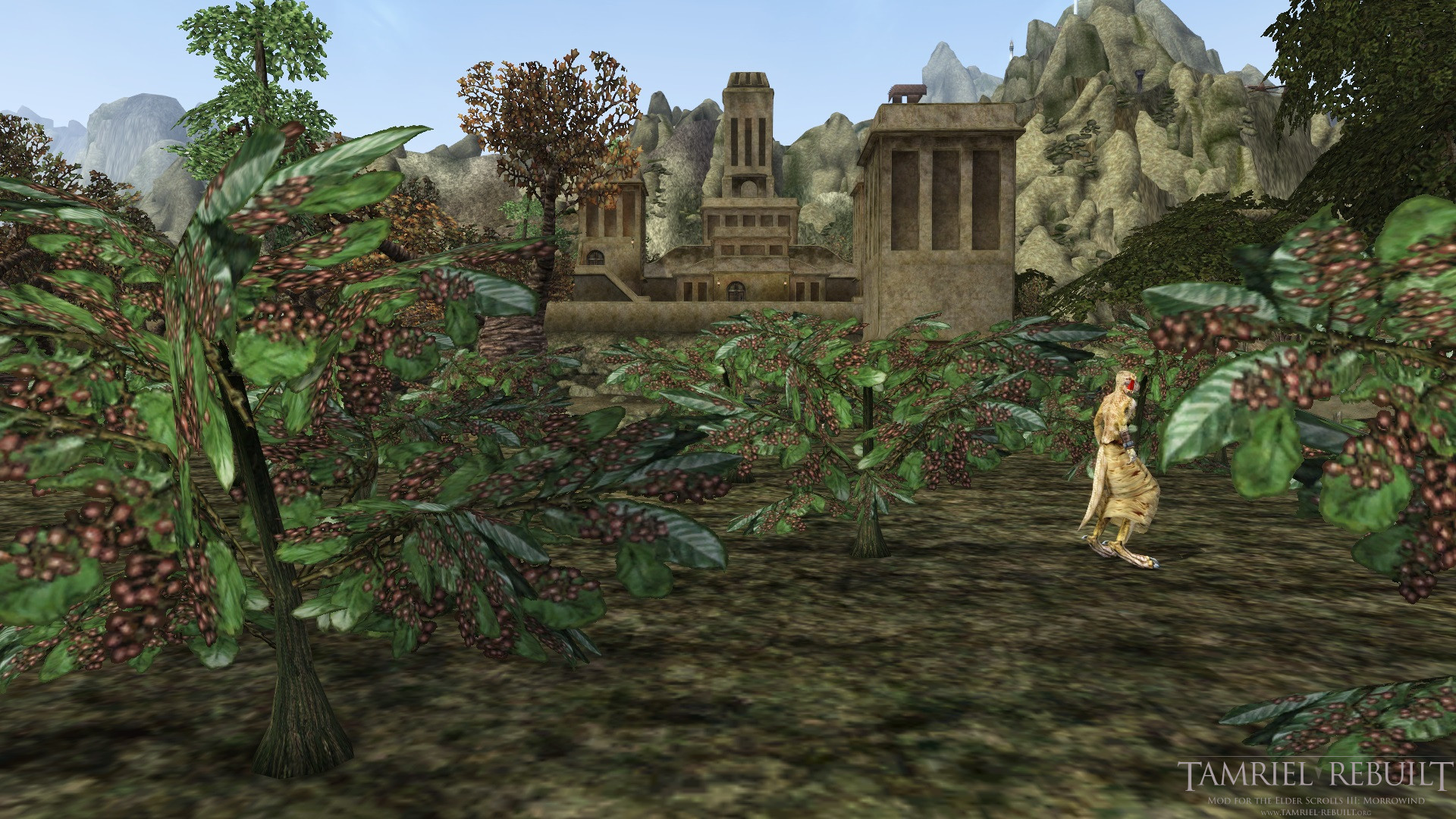 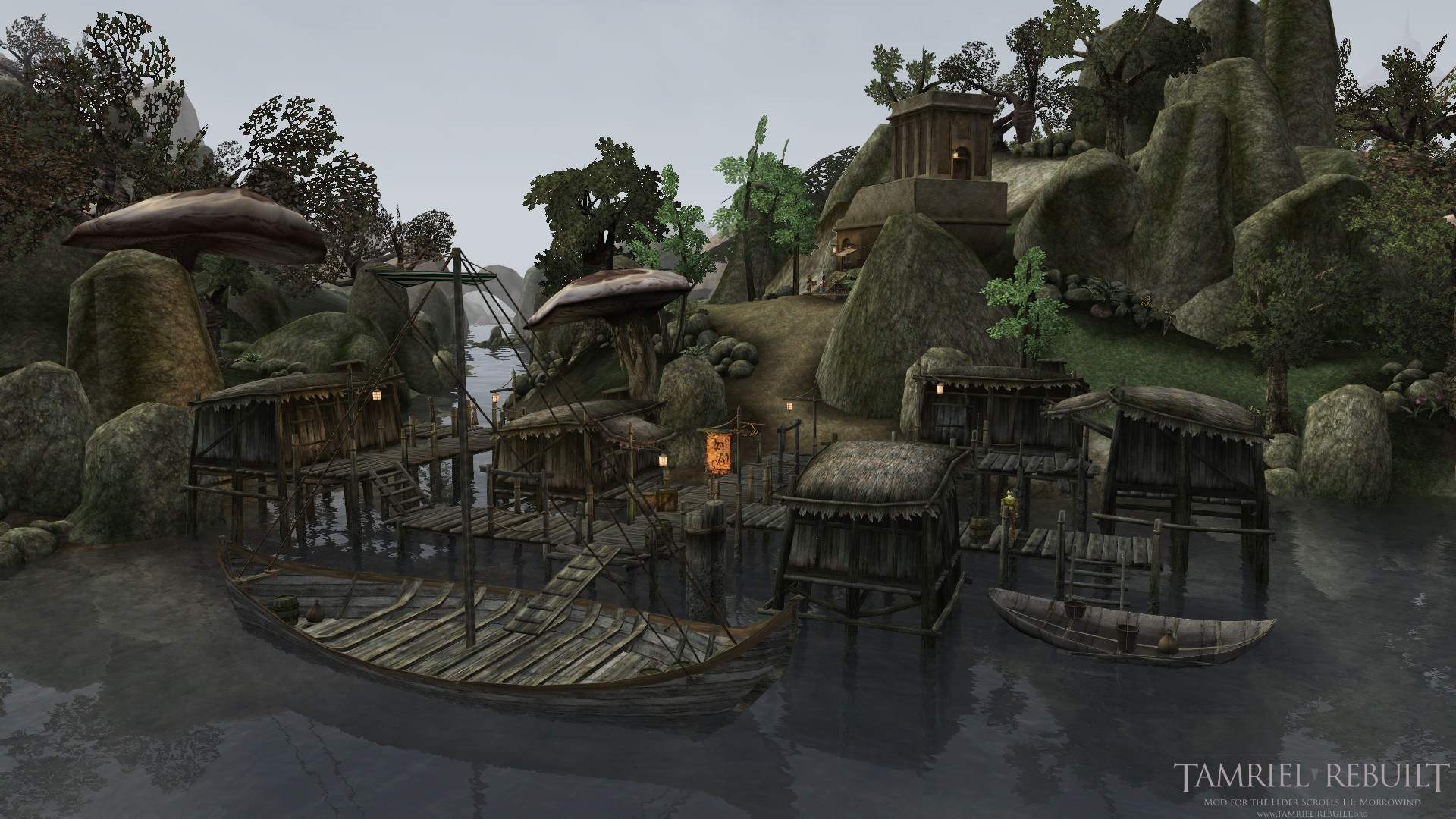 Towering over the busy plantation slaves and the grim guards is Tur Julan, an ancient ruin of the time when these lands were the Indoril/Redoran border. 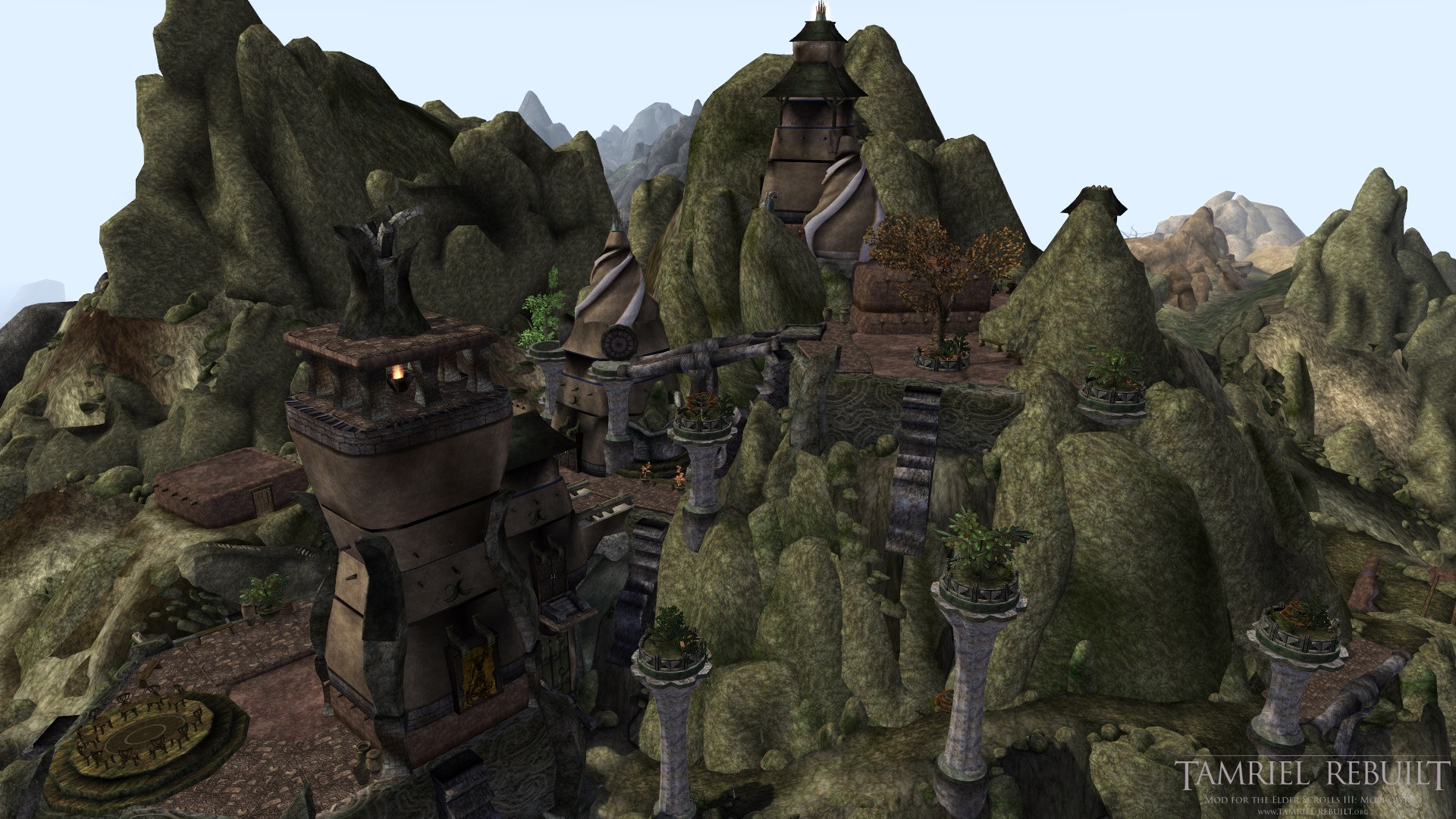 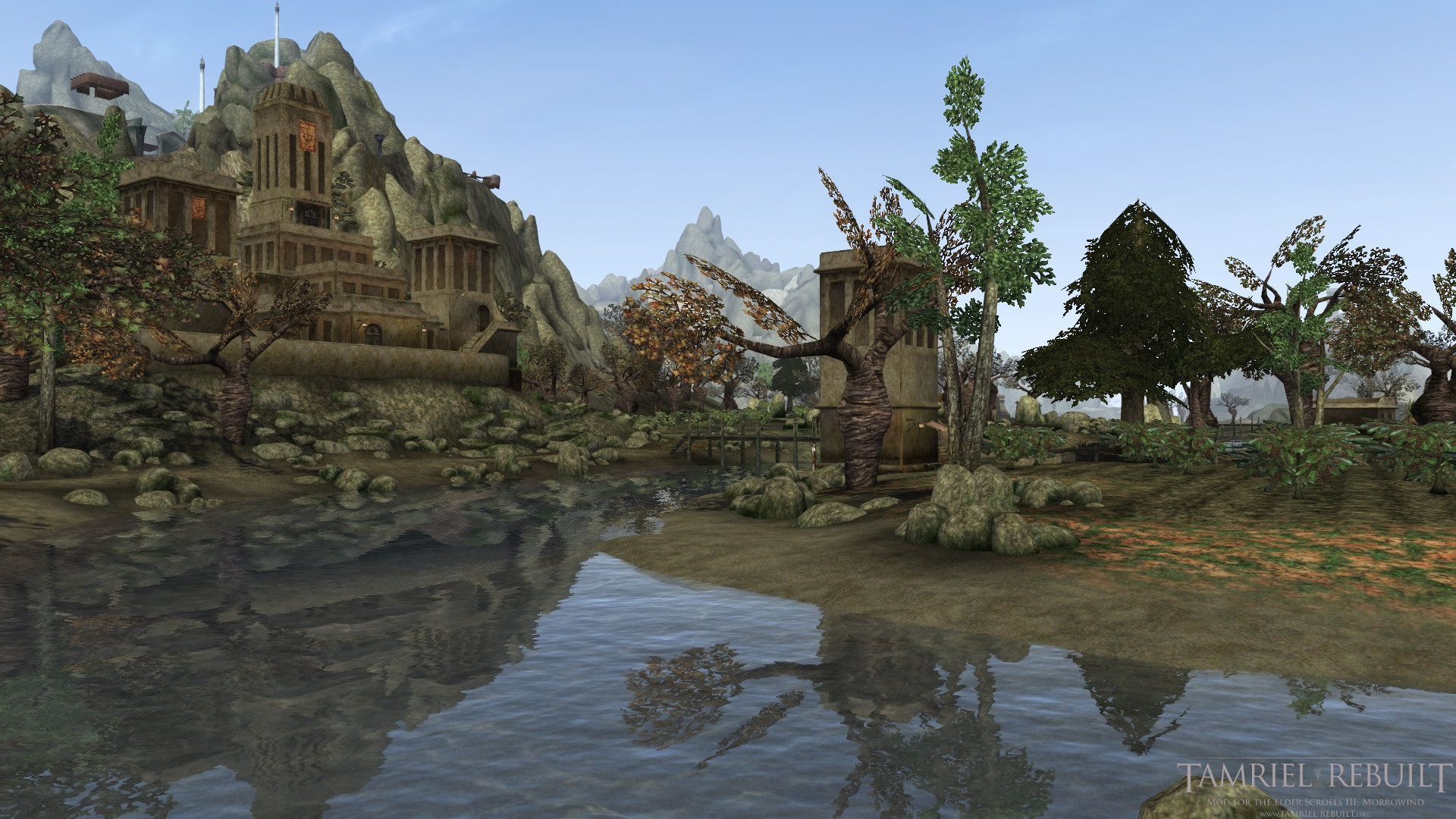 By far less well-developed than the west, the eastern bank is nevertheless home to small farms and – most importantly – Roa Dyr, the chapel-stronghold of the Indoril Ilvi, one of the rulers of Great House Indoril. 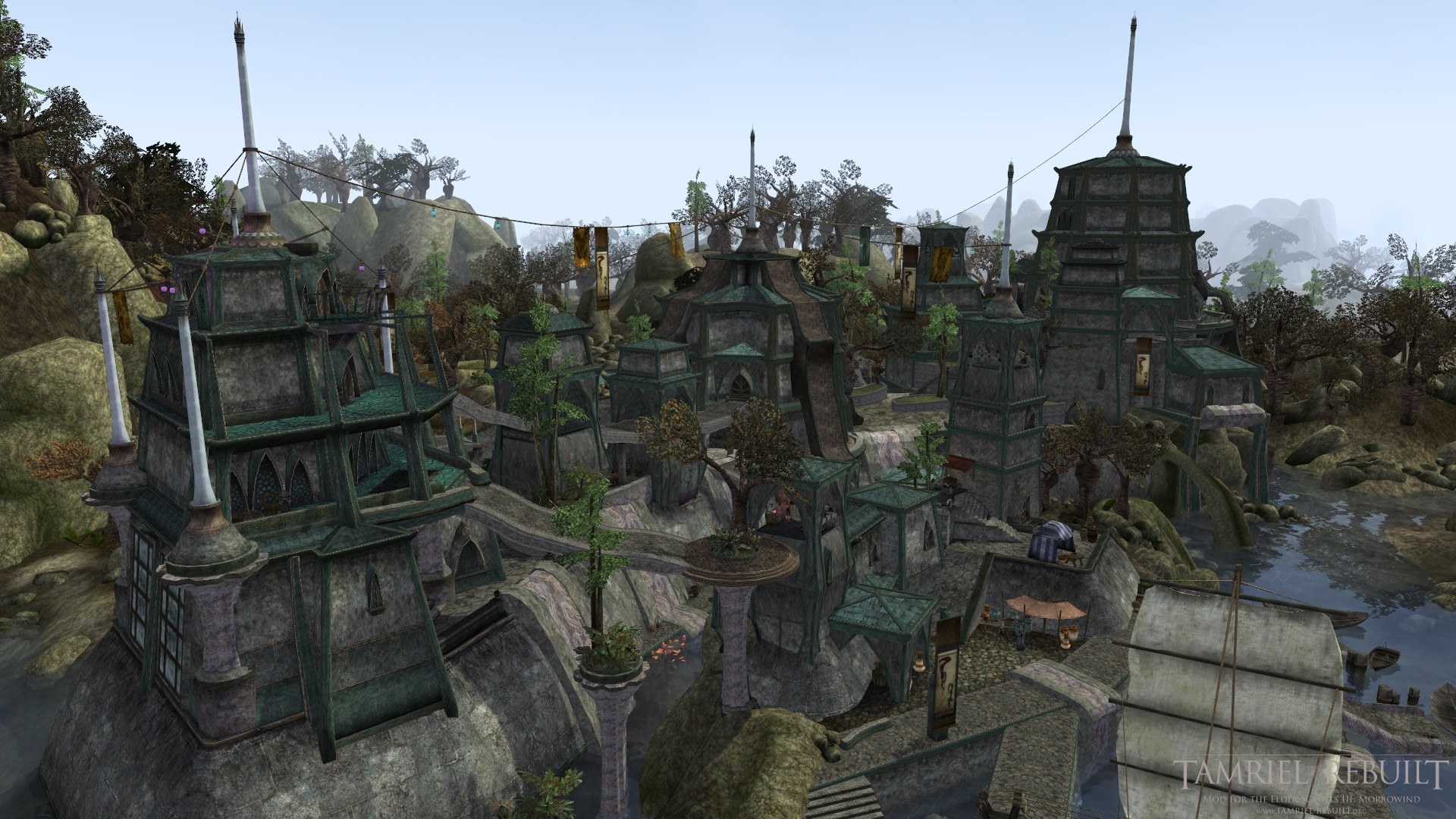 The southern parts contain not only our first foray into Lake Andaram, one of the most beautiful landscapes we have created so far, but also the Temple stronghold of Almas Thirr, the only bridge across the great river Thirr. 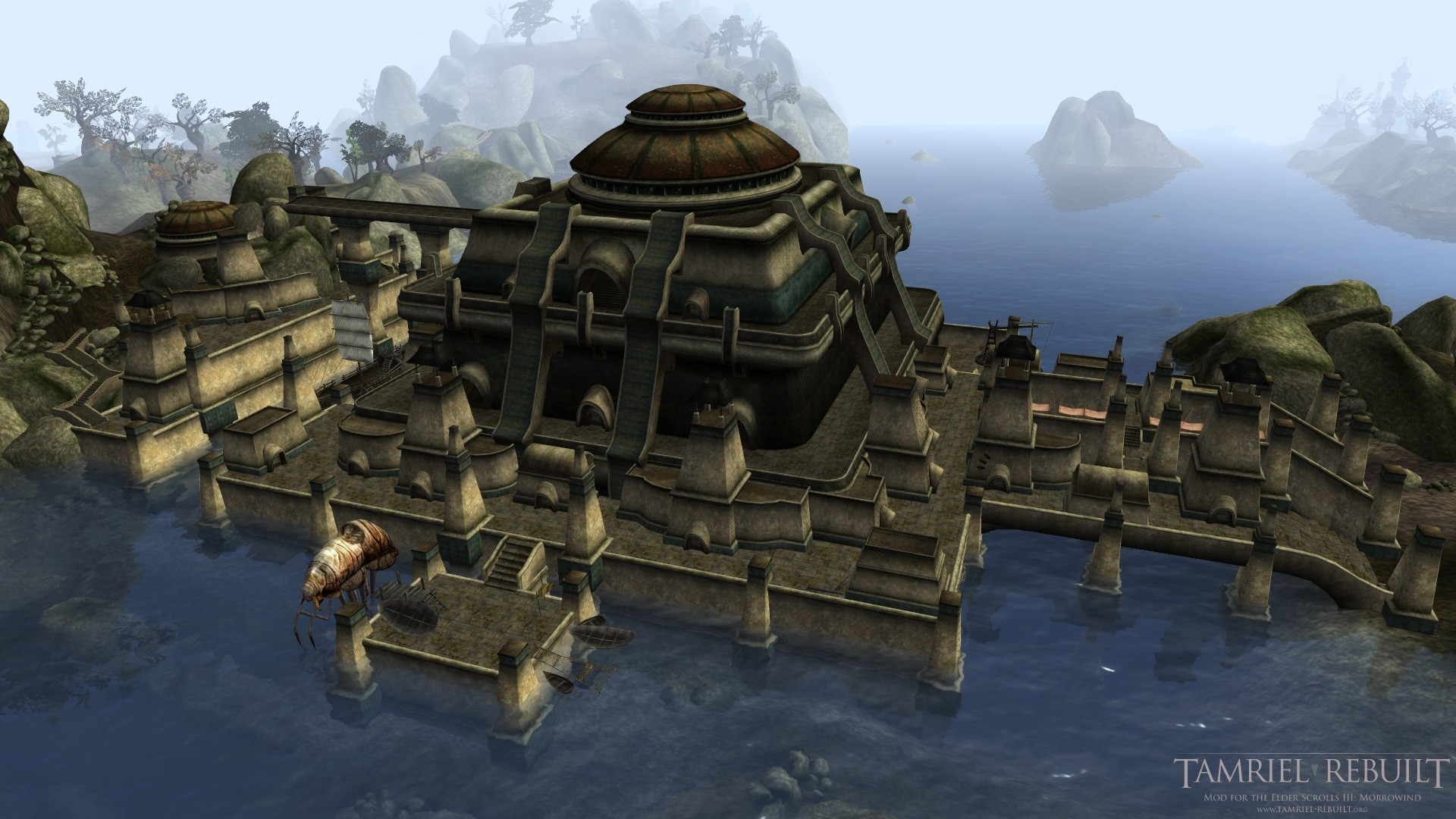 Beyond Almas Thirr, the division between east and west continues.

The town of Aimrah, the last water port House Indoril maintains on the lake, will in the future be part of the Thirr Conflict questline, which will be handled in the House Hlaalu and House Indoril questlines.

These will be part of future releases, but the presence of Nav Andaram, the mainland Hlaalu player stronghold, will give inquisitive modders a hint on how the conflict will play out.

A bottleneck for TR1807, quest development remains the most time-consuming part of preparing the next release.

With Old Ebonheart, we had a lot of quests taking place in a relatively small space, with only a few other settlements to cover.

With Aanthirin, we focus more on miscellaneous quests, rounding out the different factions and giving an inside into the mainland House Hlaalu from the outside, but our main focus is the development of dialogue for a lot of different places and a lot of different people.

The highlight will nevertheless be a faction questline: the Temple questline for Almas Thirr includes a new pilgrimage for the faithful Dunmer (and some pious Outlanders too, presumably).

Exterior development has largely shifted from the Deshaan to the southwestern Hlaalu heartland, due to the ongoing lack of assets for House Dres. While progress has been made, there has been a concerted push to go into the Thirr River – and this is where we went.

While some areas around Lake Andaram are included in TR_Mainland, others will remain in TR_Preview for a while or will be stuck in our claims browser, being worked on.

At the same time, while the Lake Andaram areas are being polished up, development has started on the Thirr Valley, even further south. 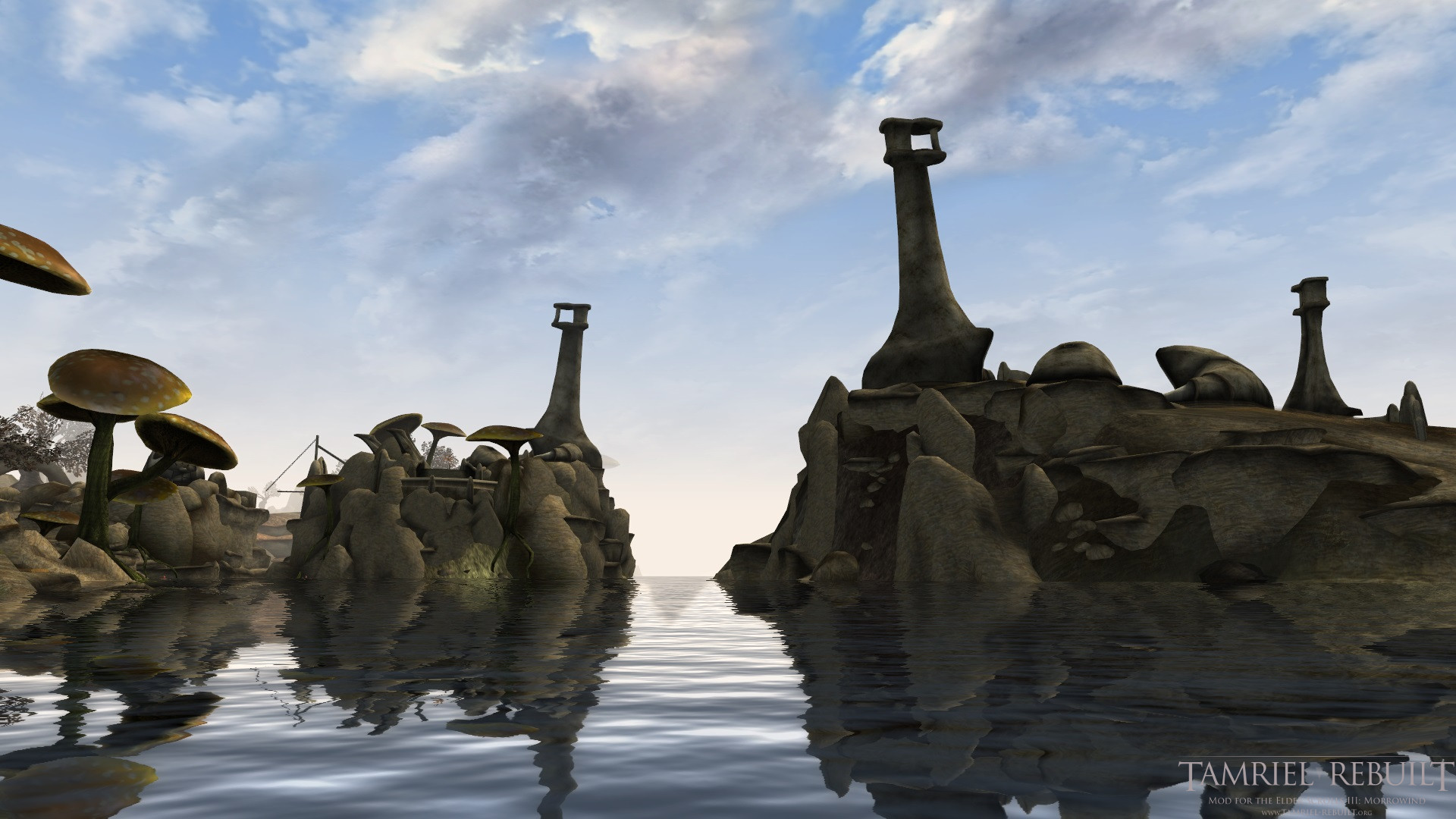 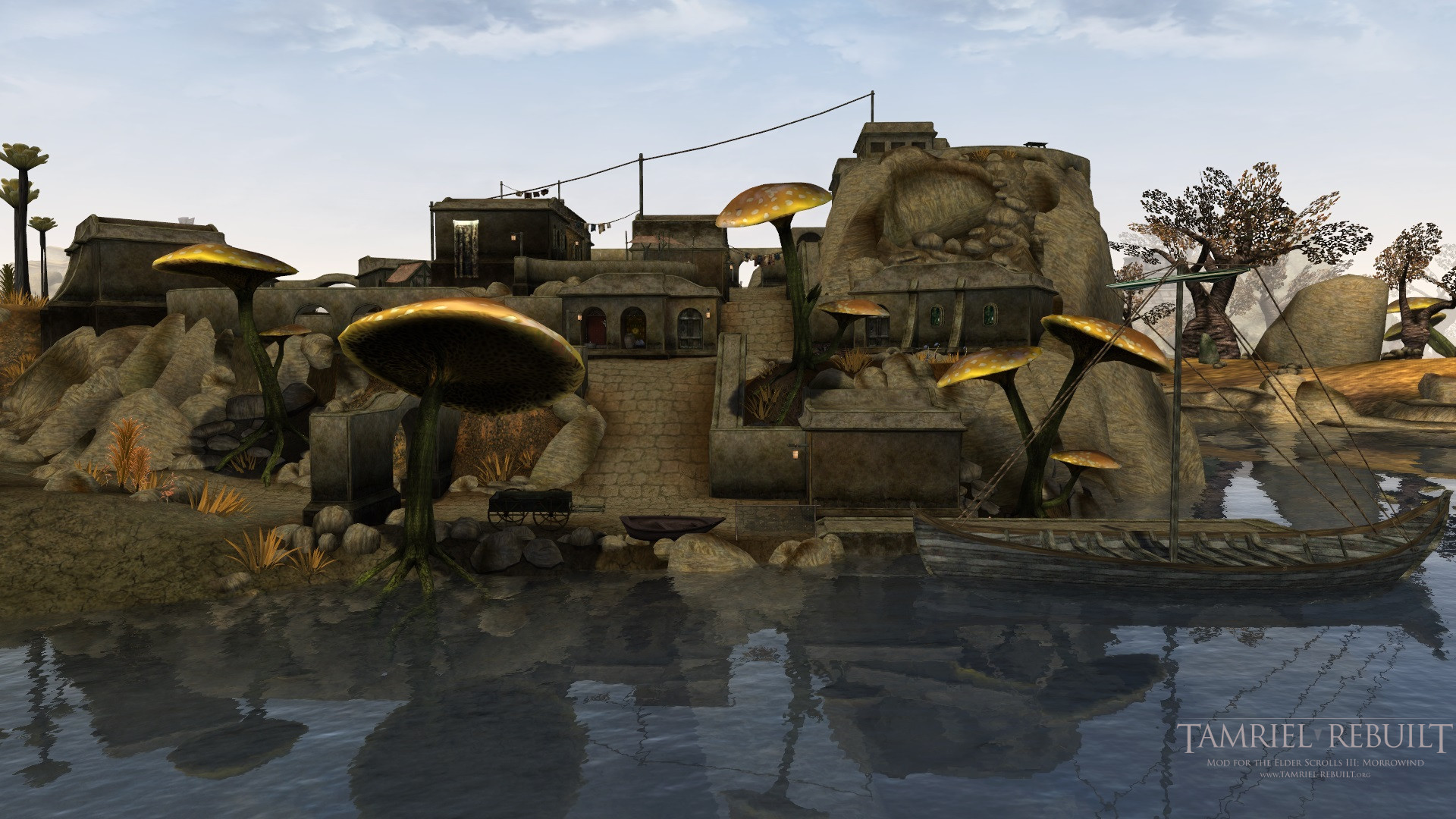 In the west, some work has been done on Kragen Mar, another Hlaalu city with importance and gravitas. 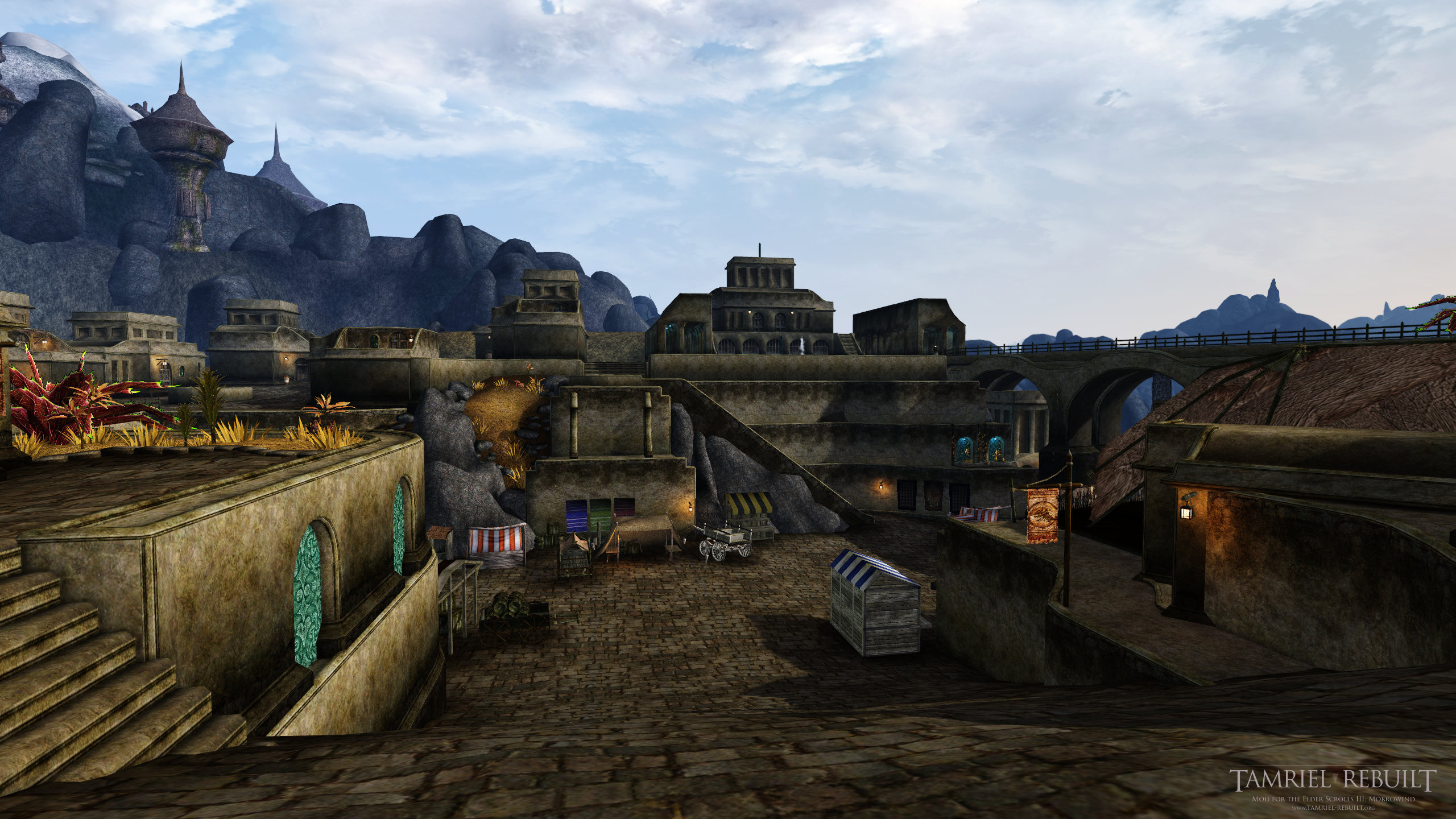 Note: The rock textures are placeholders.

TR_Mainland itself has received some updates. Aside from adding several more quests in existing areas and the sinking of a content-less peninsula, the Ruinous Keep, a haunted Imperial ruin right next to one of the major roads in the Sundered Scar, has been moved into the Padomeic ocean and renamed to Wavebreaker Keep. 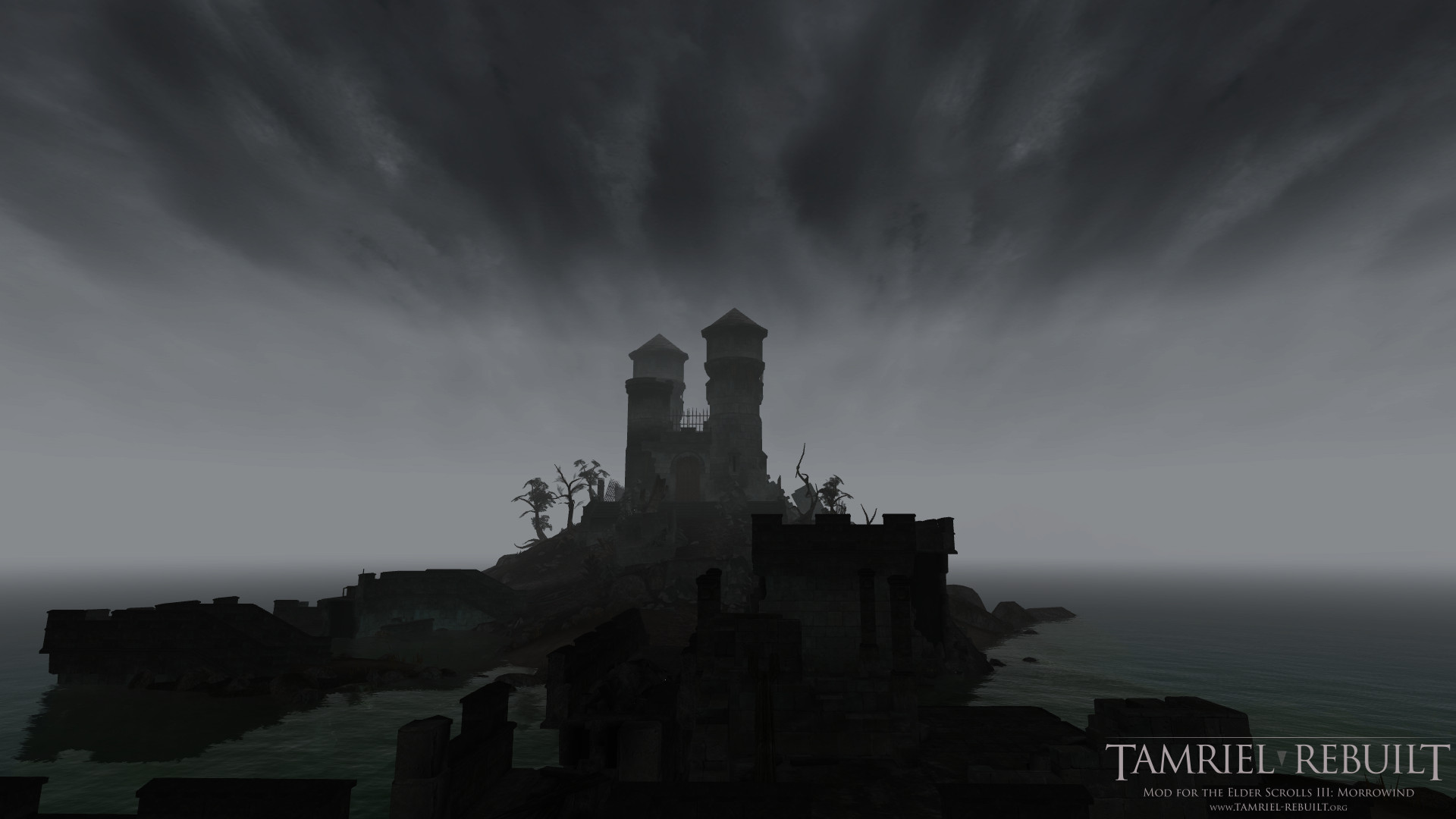 Out of the swamp, at last.

This is part of the ongoing process to display the impact one of the more "forgotten" periods of Tamrielic history had on Morrowind: the invasion of Akavir by Uriel V's forces, their defeat and retreat, and the following period of paranoia about a counter-invasion.
Over time, additional ruined ports will be added to the eastern coasts, and our in-game books and dialogue will be expanded to cover these events. Most of this will be in future releases, with quite a lot of it way in the future.

Finally, the next version of Tamriel_Data will contain a very large number of new assets and fixed/edited versions of existing ones. Look out for new books, rocks, high-res textures, flora, and the odd artifact or two. 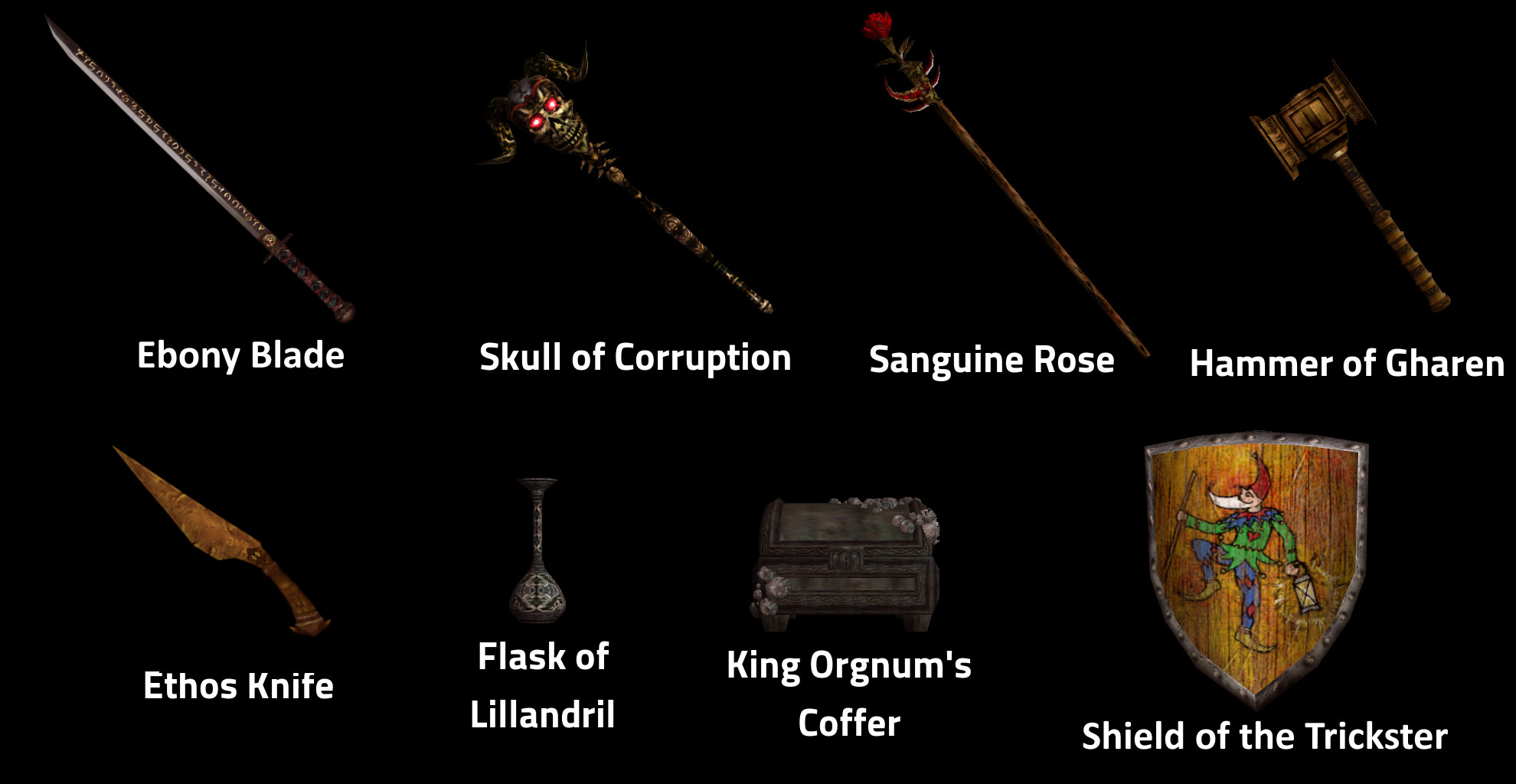 A look at future targets for artifact hunters.

As with TR1807, we expect the release to be followed by a period of bugfixing. Despite internal and public test periods, it is virtually impossible to create a bug-free release.

Our bugtesting period last time around was surprisingly positive – it was only necessary to release TR1809 after two months, instead of immediate hotfixes – and we hope that this year's will be as well. Nevertheless, we are under no illusion about bug-free releases.

After the bugs have been extinguished, our current plan is to continue developing exteriors in the south, dialogue and quests in the west, and assets in the east.

If things go well, you will see 2020's status update talking about the road to "Dominions of Dust". Wish us luck (or help us out, see below)!

Time stands still for nobody. A lot of the developers who were crunching on Old Ebonheart are currently busy with pesky irritants like graduations, internship, or general job problems.

If you feel inspired to help us out, there's no question: we want you to!

If you want to write dialogue or quests, know your way around the Construction Set, GIMP or Blender, and want to contribute, you are of course welcome to help out. But even if you don't have those skills yet, you are welcome bugtest, provide feedback, or just talk about Tamriel Rebuilt, Morrowind, or lore in general.

If you are interested, don't be afraid to just hang around. Tamriel Rebuilt is for everybody, and will remain so!