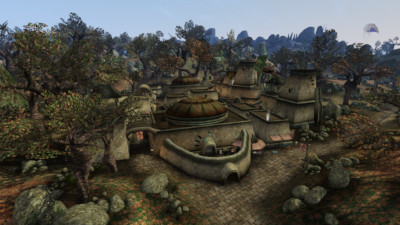 Vhul is a Velothi village led by Hetman Vanis Nithri, on the eastern bank of the Thirr River. As it is relatively close to Old Ebonheart and Almas Thirr, it gets more outlanders than most Velothi towns.

As a result, the locals banded together in their pursuit of foreign money. The Syvvit Tong, or Swindler's Guild, monitors dealings with outlanders, effectively meaning that they monopolize trade with them. While it's not exactly outlander-friendly, the authorities (Indoril Ilvi and the Temple) disapprove of the tong because it undermines the Indoril class structure. An important point to note is that the Tong is not anti-establishment; they're just Dunmer, some of whom are fairly well-respected within Vhul, who get a kick out of profiting at the expense of n'wah, but do so in a way that rubs the establishment in the wrong way.

The other villagers are mainly dealing with Velk. They are peaceful animals, who mostly drink nectar from flowers, which can then be extractor from their livers. The nectar is used to make punavit, a sacred liquor of House Indoril, and as such, the authorities heavily regulate its trade and export. The exact procedure of brewing the sacred liquor is secret. It is used by high-ranking Indoril nobles to communicate with their long-dead ancestors.