A rough concept of the region: 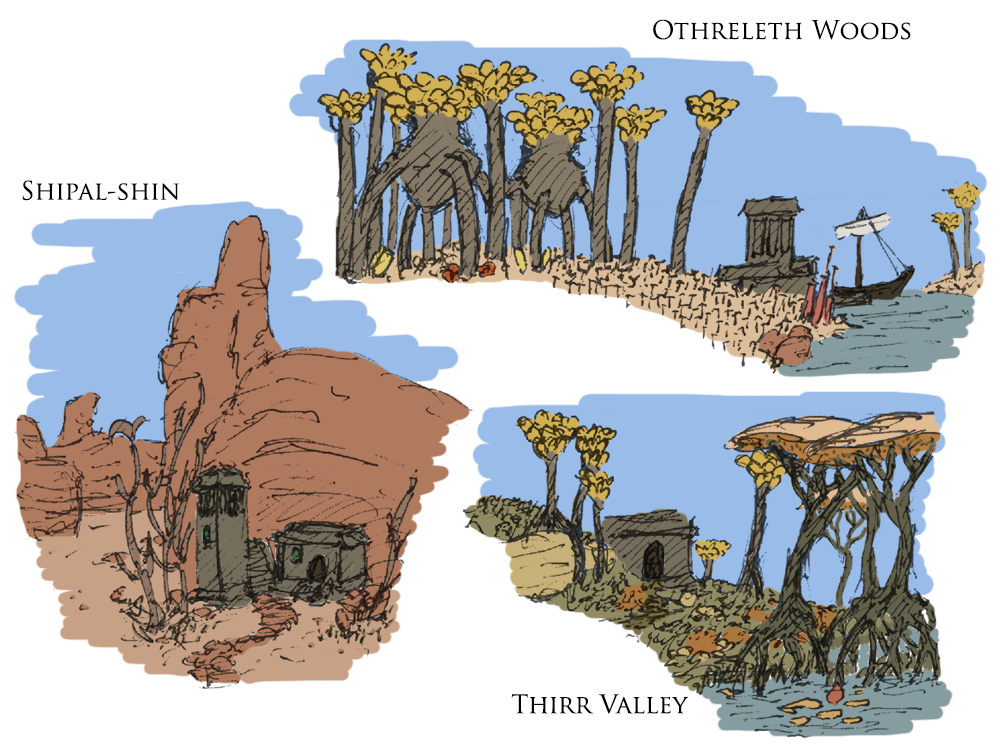 We went over the assets TV will need, which has already been discussed in a past meeting, but didn’t hurt to go over again.

The core of Thirr Valley is Lake Coronati and the mangrove swamps on its banks, which are relatively rich in vegetation. Further away from the lake, the land rapidly becomes arid, rocky grassland, with low cliffs found especially at the edges of the region.

Rocks: yellowish retextures of vanilla rocks + TR cliff meshes. The rocks are smooth. Near the southern edge of the region Shipal-shin rocks might appear, but that’s not currently a concern.

Ground Textures: alternatives to AI rocky textures will be needed, as TV uses yellow rocks. Possibly different vegetation textures as well that are more yellow than AT’s, but only possibly. The AI dirt probably still works.

Flora: Aside from any AT and AI flora that fits (probably stoneflower, corkbulb, the new AT leafy plants, the AT water ‘lilies’, the mushshroom tables (in different colours, though) and temple domes, perhaps others), weeping vale and mangrove mushrooms

In the context of the open exterior claims bordering the region, the heightmap also got discussed:

A rough plan for the heightmap of the Thirr Valley region: 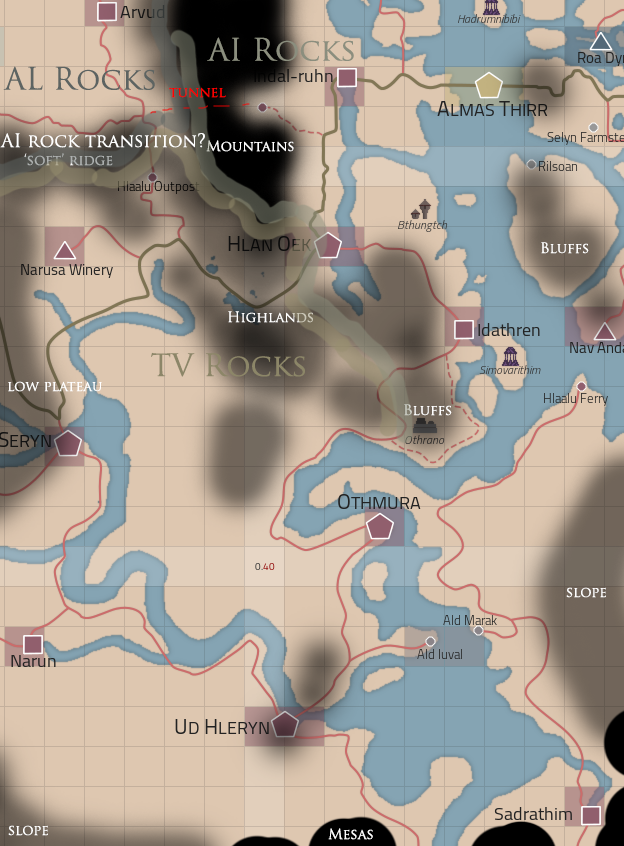 Note that the rock texture transitions on that map are approximate, and only apply to the area west of the Thirr and north of the Othreleth; the TV-Shipal-shin transition in the south is not shown.

While there should be a rise of elevation between Othreleth Woods and the Armun Ashlands (possibly with AI rocks as a transition between the dark grey-green Ashland rocks and the yellow TV rocks) high enough to justify the Hlaalu outpost existing, it should not be as high or sharp a border as the AI ridge to the east; ash from the Armun Ashlands occasionally is blown into the Othreleth Woods over the ridge.

Progress is slow, due to delay in the data update and Old Ebonheart section file release.
Bugs are fixed in Northern Aanthirin and some questlines for Old Ebonheart are in progress.

Nobody got around to listing the TR-added generic topics and where they are used since the last meeting, but local area and local economy seem to only be used in maps 1 and 2. Local shops is another barely used generic topic which seems to have the same purpose as the vanilla services topic.

A list of TR-added generic topics and where (at least in general terms) they are used should still be compiled, but it seems to not be immediately relevant to the upcoming release, as those topics do not appear to have been used in or around Old Ebonheart.

For the time being, these topics should not be used, pending a clearer definition and retrofitting them into or removing them from the rest of the mod.