The Orluhk have a unique clan power makes them incredibly slow, but nigh-immune to all damage

Skin of Iron (Power)
Resist Normal Weapons, Resist Magicka, Drain Acrobatics - 100, Drain Athletics - 100
OR
Dodge, Burden
OR
something else (other possibilities were buffing all of the armour skills + unarmoured, having a shield effect, restore or fortify health…)

As the implementation of this power is too academic for a brief meeting, it was agreed that they should be tested in-game. A plugin adding the Orlukh already exists, adding several iterations of this power to decide which one fits right should be little additional burden and can be handled in the forum thread.

As it rains in Roth-Roryn, an opening needs to be created in the roof above the iron mine so that the rain doesn’t appear to be falling through rock. An entrance also needs to be added to the main interior described below. 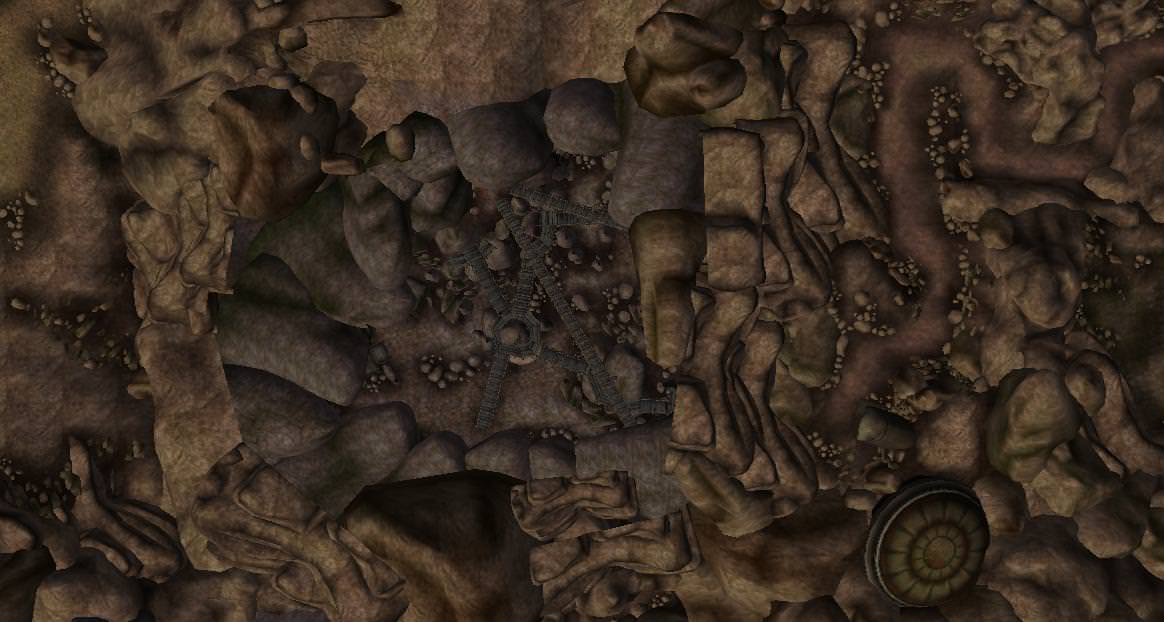 The nearby Velothi tower has the interior of i4-414, which leads through a Velothi interior to a cave and then a buried Chimer stronghold.

The interior of the Orlukh mine should have a Malacath shrine near the entrance, several dead ends, and another cave with a special forge of some kind.

A hidden door in the forge room would lead to the vampire commons and the cattle pen, another tunnel would lead to the location of the Ancient (the bloodline-gifter, not the clan leader) who would reside in another buried level of the Chimer Stronghold. Through his lair, the Velothi tower can be entered from below. 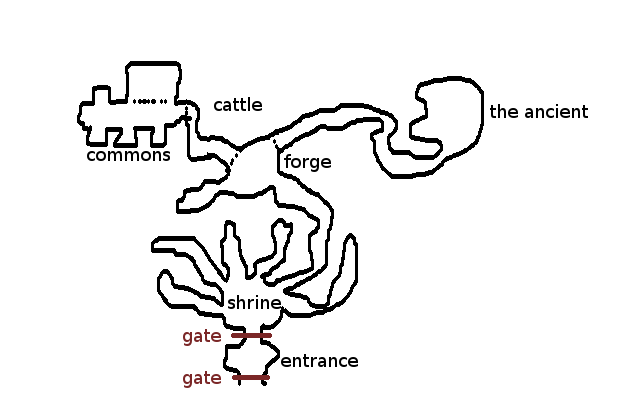 A very rough general idea of the mine interior, with a gate behind the entrance that would feature in the “Blood and Iron” quest.:

The tower was discussed, and the inhabitants (Velothi scholars, alternatively bandits) could’ve been attacked by the vampires, with some ending up dead around it, others being turned and scattered, and at least one that made it to Andothren’s temple in time for a cure, that could act of a secondary (or even primary) trigger for the Blood and Iron quest

The Temple would have that quest, to purge the velothi tower of vampires, and would be given the choice to kill a fellow priest / Ordinator rather than a mine foreman.

The Orlukh clan itself is concentrated in the mine.

Orlukh-clan vampires can be spread further out (these would be bandits that escaped when the Velothi tower was pierced), with the Armun Ashlands and the Thirr Valley being hard borders.

Ancients (coworkers of the Orlukh Ancient or people he infected before being buried) could be found as far up in the Velothi regions as desired.

Left off for detailed discussion at a later time: with Iron and Blood as an introduction to the clan, the questline would presumably base itself around banditry (against Hlaalu targets), finding other ancients, and a mad quest to find and kill the descendants of the people who sold the Orlukh the mine.

New versions of Hlaalu-Thirr have been uploaded, adding and renaming interiors, adding custom items and quest hooks. The empty fields have finally been filled in.

Hlaalu-Thirr is missing 3 interiors (a grotto, shack, and mansion). NPCing can happen now, however.

The main road rework needs to be implemented in northern Hlaalu-Thirr still, as previous section borders allowed for a sudden switch in road textures.

Notes on the Mundrethi Plantation - the main hitch here is that Mundrethi is a fairly important figure, at least locally, as the second largest plantation owner in the Thirr River Valley. His character and any intrigues surrounding him, such as any ties to the Camonna Tong, need to be worked out.

The former Rethil plantation - currently the Oran plantation - had several quests made. At least one, probably more, have had the corresponding NPCs removed from the worldspace. As such, the quests are still around, but can’t be triggered or completed. They should be checked and corrected or removed properly.