The two complete quest designs have been greenlit.

Quest III (The Bloodstone Shrine) has the go-ahead for the new story: The shrine is named after a shoe in Veloth’s shoe that cut him until he bled. When he cooled his wound in the waters of the Thirr, the river stilled to allow passage. A book exists with the previous story (tr_i3-685_thetaleofbloodstonesh) which is not placed in-game, this needs to be rewritten or removed.
The quest itself needs a starting point, with the goal being the Bloodstone Shrine.

Quest IV looks fine as written. The book itself needs to be hashed out (The origin of vampirism? Some other heresy?), but the people to talk to would be temple higher-ups, not Indoril lords.

The Thirr conflict will lead to dispositions rising and falling, unless it is related to specific house quests. 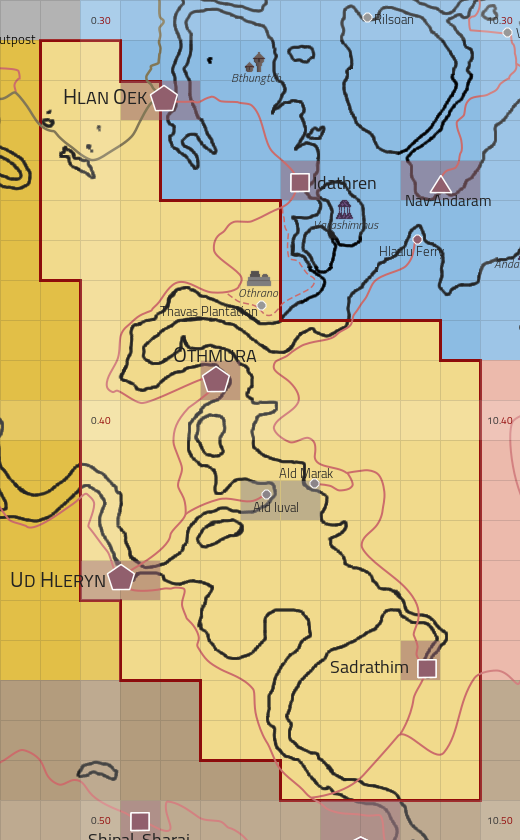 It has the most basic heightmap, contains a test cell with Othreleth Wood mushrooms and a Chimer stronghold, and a few border cells in the north, which look mostly like Aanthirin cells with Mangrove mushrooms.

What is in it? (Settlements? Whose?)

Hlan Oek (Hlaalu city), currently in the process of being merged into the Lake Andaram section file.

What is its narrative role?

As lands the Hlaalu have taken over from the Redoran centuries ago, they are a future vision of the Aanthirin. Progress had arrived and the lands are now firmly Hlaalu with all that entails: busy with trade and commerce.

What is going on there? (ie. is it challenging wilderness, or does it play an important role in commerce, pilgrimage, etc.?)

It definitely plays an important part in commerce as a collection of tradeways from the Hlaalu lands to the north. Travellers moving through Cyrodiil or Blackmarsh into Morrowind through the land routes travel through here on their way north to the Inner Sea.

A lot of the region outside of these trade routes would be wilderness, even dangerous wilderness (such as swamp trolls hiding in the mushroom mangroves). Small Plantations abound where the wilderness is tamer (particularly near the banks of the Thirr), but riches are more often found further south and west.

Who inhabits the region?

Hlaalu: farmers, plantation owners, service providers for travellers. Slaves (both owned and some roaming free in outlaw bands). Fewer outlanders than in Othreleth Woods or Narsis.
Redoran remnants are in Ald Iuval and Ald Marak.

What are they doing there?

There are two Redoran strongholds on the mouth of the Coronati, which never quite left, and Hlaalu never quite bothered removing them entirely. More of a long-standing memorial to their past than anything.
The Hlaalu mostly took it for its trade significance, otherwise for minor economic gain, any slaves are there due to being bred and traded through the area and sometimes escaping.

Outlanders are mostly there for trade as well, and the place isn't really as welcoming to them as other parts of Narsis District.

Who used to inhabit the region (especially before the War of the First Council)?

Velothi, who skipped the Ashlander stage and eventually became member of House Redoran and then House Hlaalu. A few Dwemer freehold outliers.

What did they do there?

Fishing, herding. The Thirr Valley was not economically well-off.

How densely populated (and where) is the region?

The settlements with their intended size are already depicted in the province map. Aside from these preplanned ones, various farms (particularly Netch farms) and fishing shacks should exist. 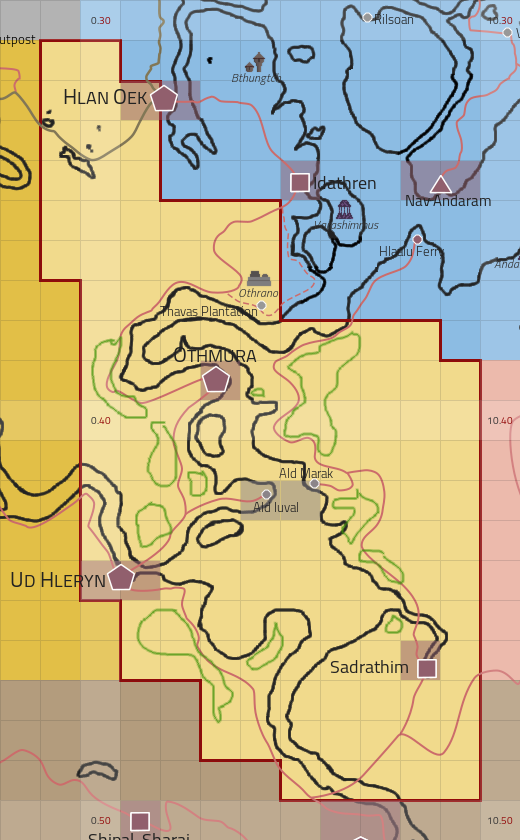 How would the things within the region (dungeons, settlements) be arranged?

Dwemer ruins and Velothi towers should be situated at the periphery, where the elevation rises, with Dwemer ruins being confined to the northern parts. Chimer strongholds and to an extent the Daedric ruins can be placed more in the interior.

Most of the dungeons should be bandit or slave insurgent caves and underwater hideouts. A few Hlaalu lookouts on the east banks (with nets to catch underwater troublemakers) would compliment the Redoran outposts well.
The settlements should have underwater nets in a similar way to protect their harbor.

How do we want the player to experience the region in-game?

As the only attraction of this region is the road to Narsis, the player will likely pass through via boat service. Their focus will be on the settlements, which for the most part are coastal.

The Fighters Guild and minor nobles would offer more quests in the region, getting the player to explore off the beaten track: fighting Argonian raiders and bandits.