The original proposal is to move the ancestral tomb and the questline from Helnim to the Velothi Mountains west of Kartur. The main benefit would be having quest pointers to the West from OE.

The questline would start in OE, with the questgiver pointing the player to an off-site encampment of the IAS, situated someplace west of Kartur. No more content in added to OE itself. At the base camp, the player meets the second guestgiver (who's in charge for the rest of the questline), and is given the task of scouting for potential dig sites (quest 1).

Requirements for joining the questline at different IAS guildhalls were briefly discussed. A meeting would be nice for fleshing out the faction.

This should wait until the release is done, along with some more Andothren planning.

The stronghold contains a renegade tribe of Ashlanders, which have formed around a gathering of Mabrigash that act as rulers. Connections to the ESO “Mabrigash” tribe can be added in references to the tribe living near Almalexia in old days, only to be driven out and eventually setting in/on Volenfaryon.

One of the Mabrigashs should be named Seba Harrinat, with the tribe being nameless (having embraced different, better ways).

The tribe is led by the Elder Sister, primus inter pares of the 3 Mabrigash council. Alongside them, there are 2 man-slaves and 4 hunters and gatherers.

The tribe and location could add lots of opportunity for quests dealing in twisted magic. If the PC is male, the tribe treat him poorly. Quest potential also includes dealing with the Mabrigash trying to backstab each other, and a quest(line?) with the propylon chamber.

The exterior should be edited to make the location more unique, basically adding ashlander statics and activators like wind chimes or canopies on the platform.

1: Propylon Chamber - A creepy magic lab. The player using the network and being force-greeted by a mabrigash trying to attack/imprison them when they appear could be an intriguing start to a questline. Should have a failsafe for when the player travels to the chamber normally and opens the door.
2: Dome - Hall of the Mabrigash
3: Hut - married pair of hunters
4: Hut - gatherer/worker (the tinkerer of the tribe)
5: Hut - 2 man-slaves sleeping inside near collapsed stairs

Outside - a sentry (possibly from hut #3) holding vigil.

There are birds in the exterior of Hlan Oek, which should be removed. 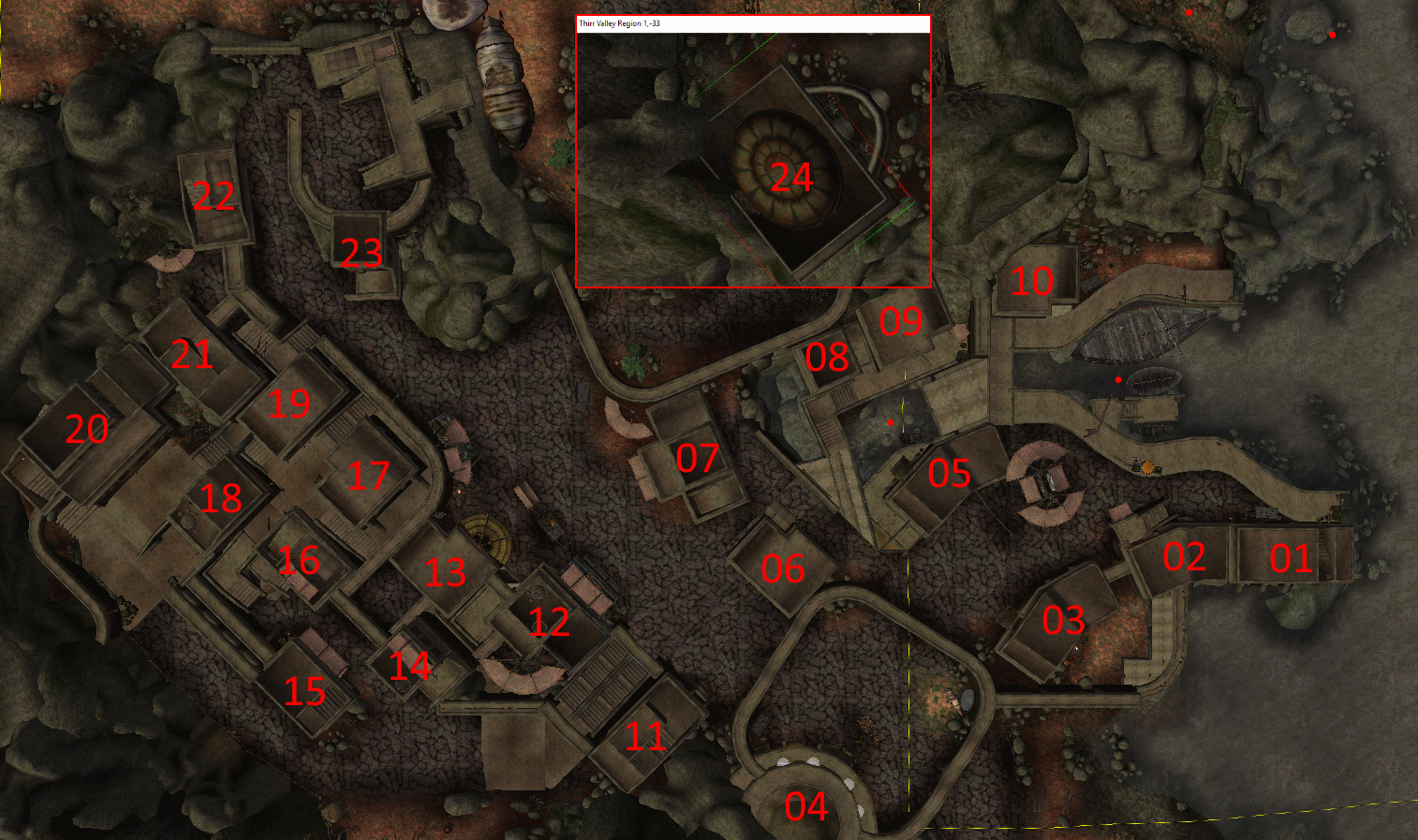