As soon as new exterior entrances are added to SVM interior descriptions should be sorted out for them so that those claims can go up as soon as possible.

Once abby has reworked her Imperial Legion planning write-up that can also be discussed. Otherwise, Vern's Dunmeri trade guild proposal could use further discussion and TV NPCing design claims could be set up.

The levelled lists for Dagon Urul and Boethiah’s Spine were discussed and directly implemented. Among other changes, the regions got some Daedra matching the Daedric prince the region is associated with along with atronachs, beetles including the parastylus, cliff racers and breeding netches.
Some Daedra, like dremora and rock chisel clannfear, should be individually placed where they make sense (single creature lists), same for land dreugh.

Daedric levelled lists which have Daedra associated with specific Daedra princes would be good to have, eg. a Dagon daedra levelled list.

In the pre-meeting discussion, adjustments to the region assignments were also discussed, basically matching up to this sketch (with the two islands in frame near the new Spine region shifted to Padomaic Sea): 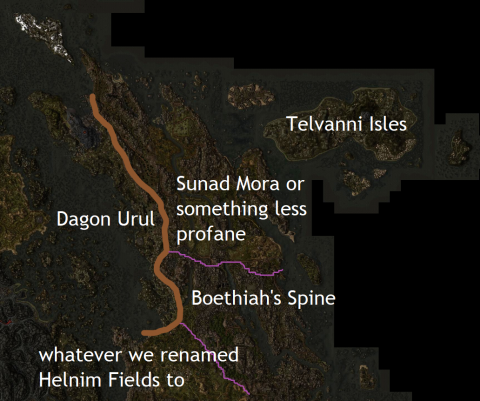 As a random note, butterflies will be renamed to flutterbies (Flutterby singular), whatever else happens to those assets.