Brainstorming, discussing, and drafting of the Master Plan happens here.

Keep in mind that the Camonna Tong is very closely tied to [url=http://tamriel-rebuilt.org/old_forum/viewtopic.php?t=24220&start=40]House Hlaalu planning[/url]. I actually have no idea at the moment whether the plan is for the Camonna Tong to be an arm of the Hlaalu conspiracy, or whether it's an independent group that House Hlaalu is taking advantage of to further its conspiracy, and I actually think that ambiguity is worth keeping.

Otherwise, there's a lot of stuff to figure out. (For example what is the extent of their operations? Do they operate in Redoran lands?)
Top

Concerning faction relationships, or NPC reactions towards members of other factions.

In [url=http://tamriel-rebuilt.org/old_forum/viewtopic.php?p=326454#326454]another thread[/url] I started drawing a table to determine faction relationships with other factions, which has changed a few times since the first sketch. The table shows NPC reactions towards members of different factions. The table should be read by finding the source faction on the left hand column, and matching it with a faction from the top row. See the table in the spoiler below.

Gnomey wrote: First of all, in those graphs, I think the vertical columns are really the most important. They show how the opinions of members of factions change upon the player joining a certain faction.
Always remember that faction relations are inherently player-centric. The player will probably never join Her Hands, for instance, so figuring out what other factions would think of Her Hands would mostly be a waste of time. Figuring out what Her Hands thinks (if anything) of other factions is, however, very important.
Truth be told, I think it might be more reasonable to just figure out the vertical columns in the individual faction threads. This would split the task into bite-sized portions, allowing for proper discussion, and it would be rather easy to then go through the faction threads and gather the results.

Per GnomeyÃ¢â‚¬â„¢s advice I am now splitting this up through the faction threads. Please discuss in this thread the reactions of other factions towards the CT to keep things organised.
[spoiler] 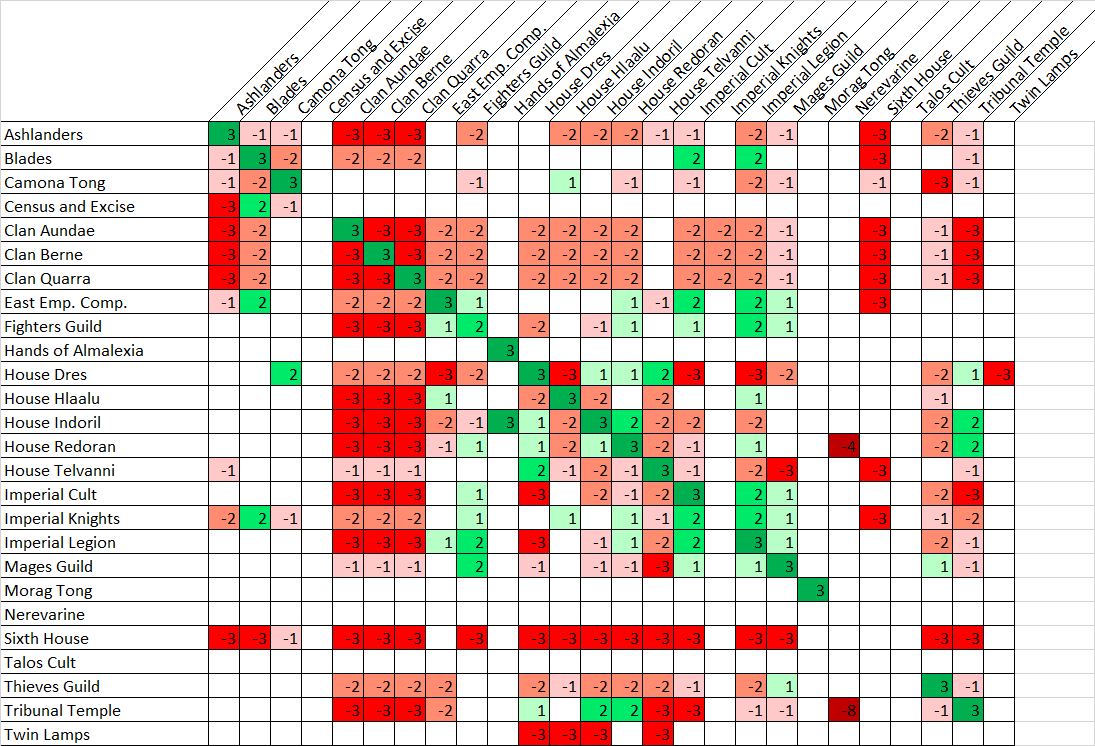 [/spoiler]
Like with Indoril and the Temple, it's important that Hlaalu and the CT have distinguishable identities. Their ties should not result in CT being a Hlaalu side quest. My knowledge on the CT is close to none so other than that I havenÃ¢â‚¬â„¢t much to add here.
Top

I'd say that keeping Hlaalu and the Camonna Tong separate is less of a difficulty, as the Camonna Tong is more focused on crime, xenophobia and violence. While all of those qualities are present in most Hlaalu to some extent, that is only to a far lesser degree. The Camonna Tong is a criminal organization which is mostly there to represent the dark underbelly of Hlaalu society. House Hlaalu is an outwardly friendly political organization and company with very complex and heterogeneous inner workings.
The Camonna Tong conceptually -- and perhaps in practice -- is essentially a limb of House Hlaalu -- which should not be the case between House Indoril and the Temple -- but I think the two organizations are sufficiently distinct.
Top

I personally like the idea of Hlaalu and the CT being seperate entities that just work together a lot. They both offer services the other wants, but that doesn't mean the CT can't have their own schemes that don't involve Hlaalu.

Also, I don't know how much the CT knows about Hlaalu politics, but the secret could create some interesting tension between the two. Most low-ranked Hlaalu only know (and might even agree with) Hlaalu's Imperial-loving facade, while the low-ranked CT's they work with would be really xenophobic. (Those who are okay with the Empire would join the Thieves' Guild after all.)
At higher levels, Hlaalu members would have Morrowind's best interests at heart, while high level CT members would still only be in it for their benefit.
Top

UESP wrote:The Camonna Tong, through Orvas Dren, controls Hlaalu councilors in Suran and Vivec. Although House Hlaalu is, on the outside, the most Imperial minded of the Great Houses, major decisions cannot be made unless the xenophobic Camonna Tong explicitly agrees, or unless their connection to the House is broken somehow.

As for the secret, I see Hlaalu discrete enough not to involve any CT members in their conspiracy. However, CT questlines could evolve around figuring out what all the Hlaalu secrecy is about.
Top

I doubt there would be a CT questline; there wasn't on Vvardenfell. Any CT quests would probably stay on the level of fetch-quests. During the course of the Hlaalu questline the CT might receive some revelations, though.

The CT probably have the most influence around the Inner Sea, so in Andothren as well. Their influence on Vvardenfell is probably inflated through the presence of Orvas Dren and his goons, with the amount of power they can exert receding as you go south, though the Camonna Tong would still no doubt be a significant faction in Narsis.

Both CT and Hlaalu have ideological as well as pragmatic elements to them. Orvas Dren, who is the leader of the Camonna Tong on Vvardenfell and, probably, over-all as well, teams up with Dagoth Ur for ideological reasons. I do not think it would be correct to say he does not have Morrowind's best interests at heart.
Top

Orvas Dren is the Crime Lord, and a 'Chaos' to the 'Order' that His brother currently stands for

Player can BECOME Head State of CT, but without effect.. (all Vanilla)

Question: can CT Operations be functional.

How to substatiate CT's current existence & how that became.

this message has been moved to Camonna Tong (past, present & future affairs)
Last edited by Kalvitto on Sun Jan 25, 2015 6:12 am, edited 2 times in total.
Top

Is this Thread dedicated to CT being a playable Faction?