Tamriel Rebuilt is a large, two-decades-in-the-making mod for The Elder Scrolls III: Morrowind that aims to add the mainland of the Morrowind province to the original game (which only took place on the island of Vvardenfell). Unlike many other large Elder Scrolls modding projects, Tamriel Rebuilt is already released – the mainland is divided into separate fully realized expansions that come complete with quests. Currently, players can enjoy expansions covering roughly half of the mainland, offering more than 360 quests and many dozens of hours of gameplay.

Last December, we revealed our development roadmap for the next few years, focusing on completing Morrowind’s southwestern Narsis district in four successive expansions. This February, we’d like to announce a modification to these future plans. Namely, Tamriel Rebuilt has decided to combine the previously separate Thirr Valley and Shipal-Shin expansions into one larger expansion tentatively called Tamriel Rebuilt: Narsis. 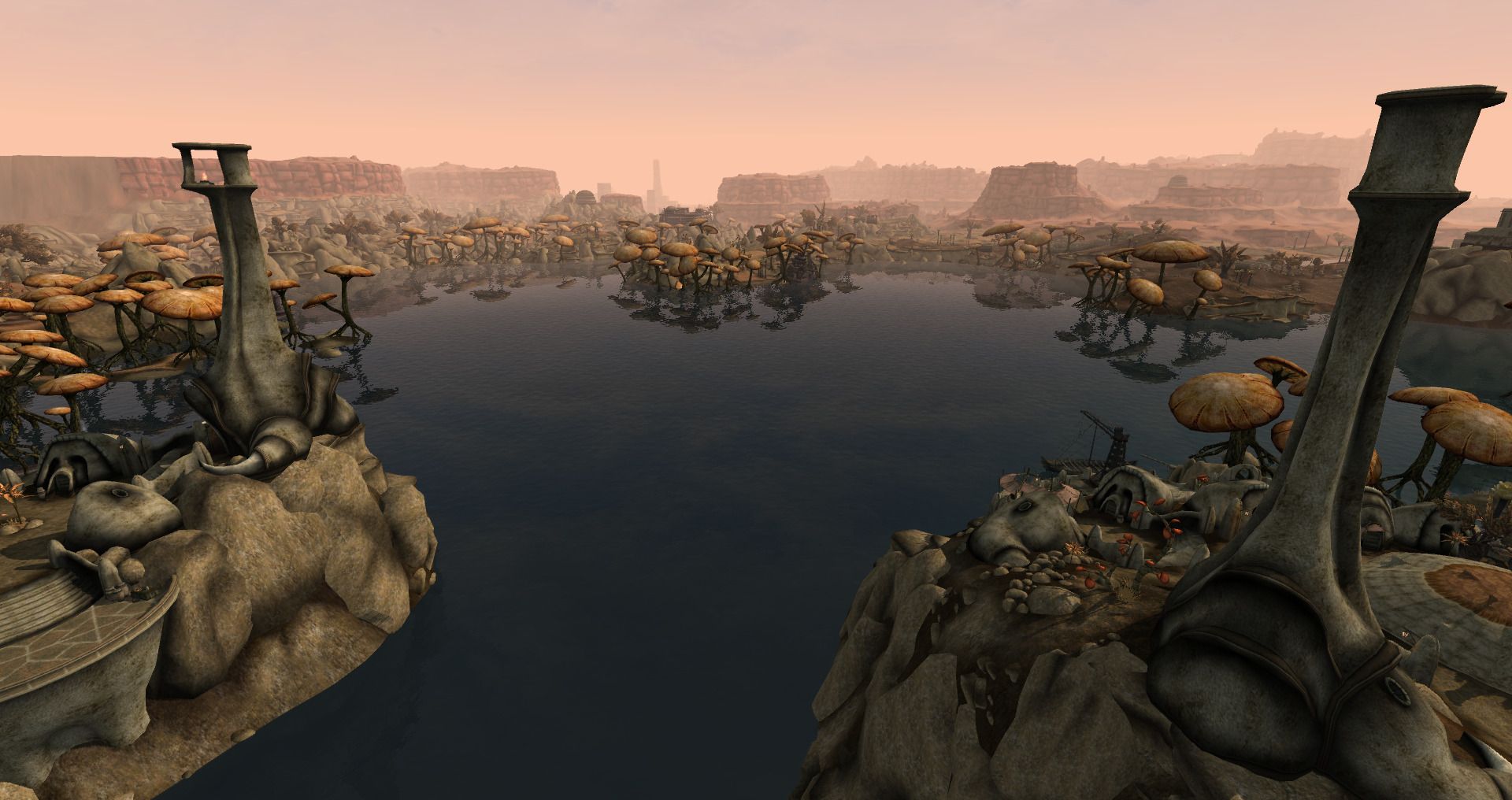 The Redoran twin towers of Ald Iuval and Ald Marak still stand watch over lake Coronati. Shipal-Shin and the city of Narsis can be seen on the background.

This change was done for a couple reasons. Namely, from a playability standpoint, the Thirr Valley expansion would have suffered from the lack of a center of gravity for quest givers, where the player could base themselves for voyages into the surrounding area. None of the settlements in the old expansion were large enough to play such a role without undermining their characterization. It also meant that, in order to provide enough content for the player in this expansion, quest makers would have felt the need to fit long questlines to relatively minor settlements, which would have hurt the overall balance of content in the mod. 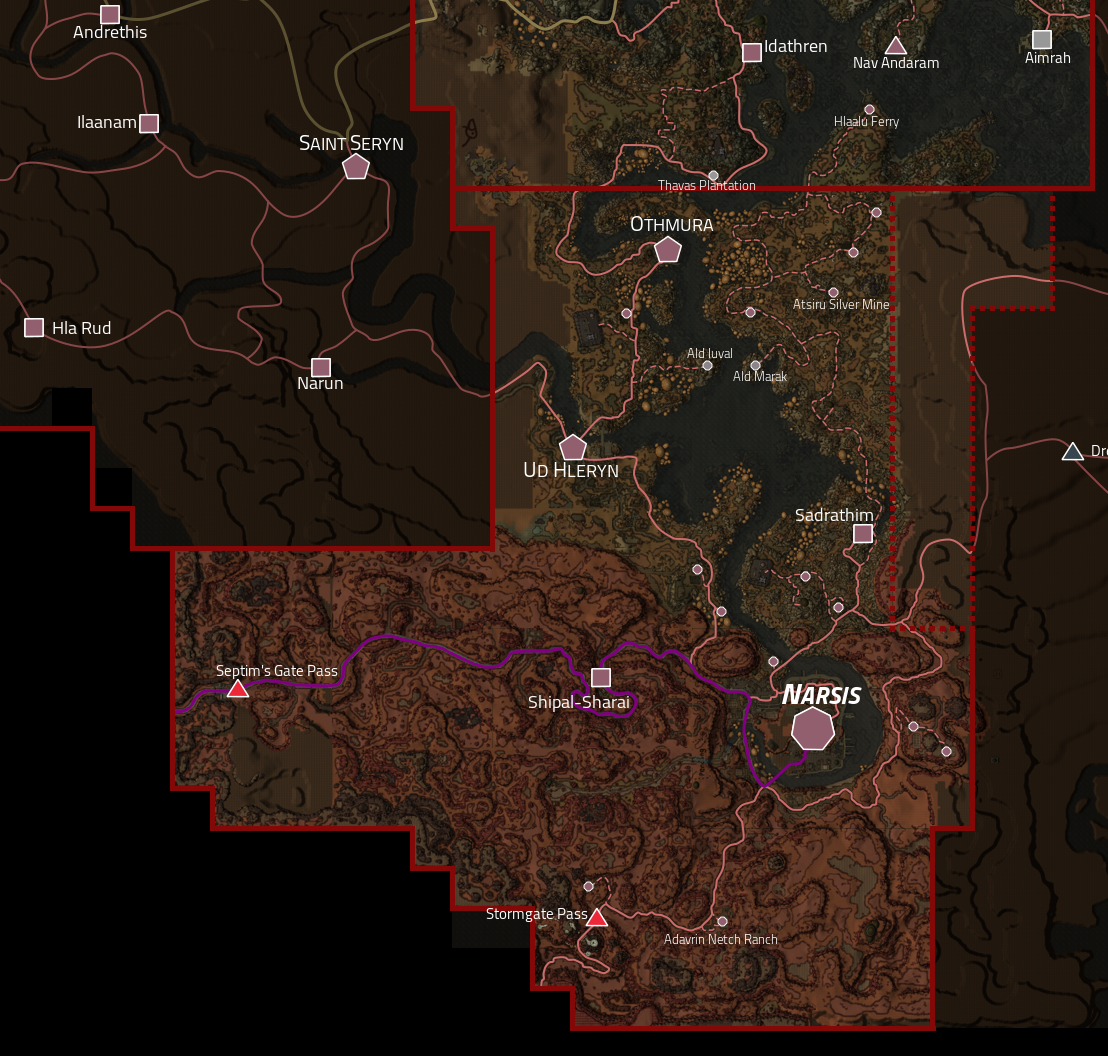 Borders of the planned Narsis expansion overlaid on an overhead map of current exterior worldspace development progress. Serrated lines mark the edge of the Deshaan Plains; this area will be included depending on the availability of Deshaan textures and 3D models.

The prior Shipal-Shin expansion would have suffered from the inverse issue. Narsis, the Hlaalu capital, is to be one of the biggest cities in Morrowind and should offer a fitting amount of gameplay. Yet, its hinterland region, the Shipal-Shin, is relatively inhospitable and wild – the city’s wealth comes mainly from trade – making for few locales and opportunities for quests originating from Narsis. Combining the expansions solves both issues – now the towns along the Thirr will be able to properly interact with their metropolis and Narsis will have a large playground to tell its stories. 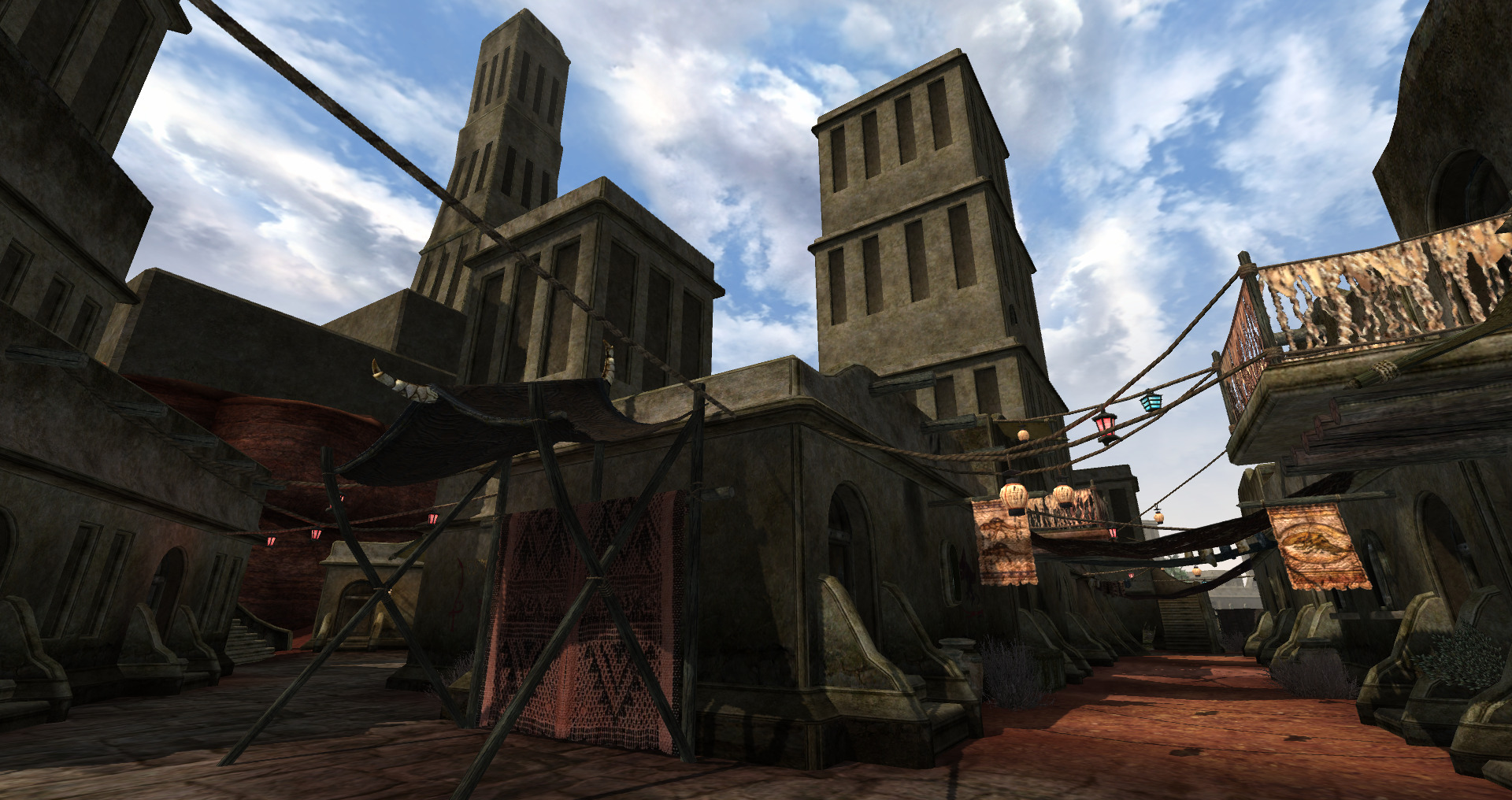 Recent progress on the St. Veloth's district of Narsis by Chef. The palace complex on top of the cliff is still a placeholder

As an aside, the Thirr Valley region has been renamed to Coronati Basin, referring to the large lake, known from vanilla lore, around which the region centers. The change was particularly necessary as the Thirr river valley proper includes both this region and Aanthirin to the north. 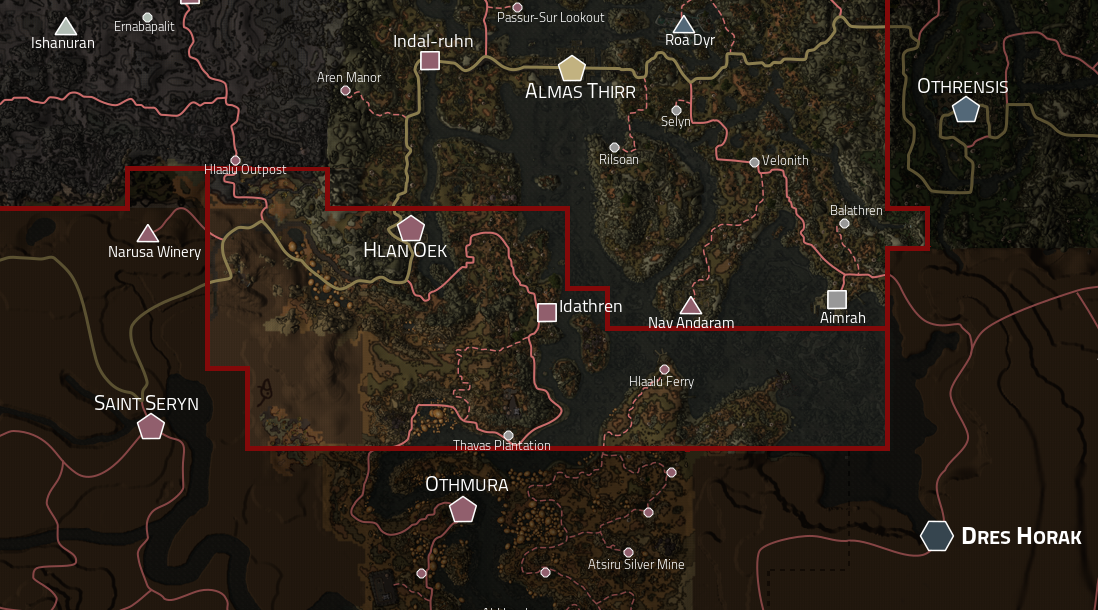 The area planned to be included in the Hlan Oek expansion (name pending), overlaid on the current in-progress exterior worldspace map.

We realize that since the development of the Shipal-Shin region is in relatively early stages compared to the Coronati Basin areas, this will delay the release of the latter region somewhat. So, to tide you over following the Dominions of Dust and Embers of Empire expansions, we are planning a small interim expansion to round out the southern shores of Lake Andaram, encompassing essentially the northern third of the previous Thirr Valley expansion. Its centerpiece will be the southern Aanthirin town of Hlan Oek, a true hive of scum and villainy. Fear not, though -- despite the relatively small size of landmass, the expansion will feature very diverse landscapes and will contain plenty of adventures. Included will be the southern reaches of the Aanthirin region, the northern part of the Coronati Basin and a first taste of the Othreleth Woods region. 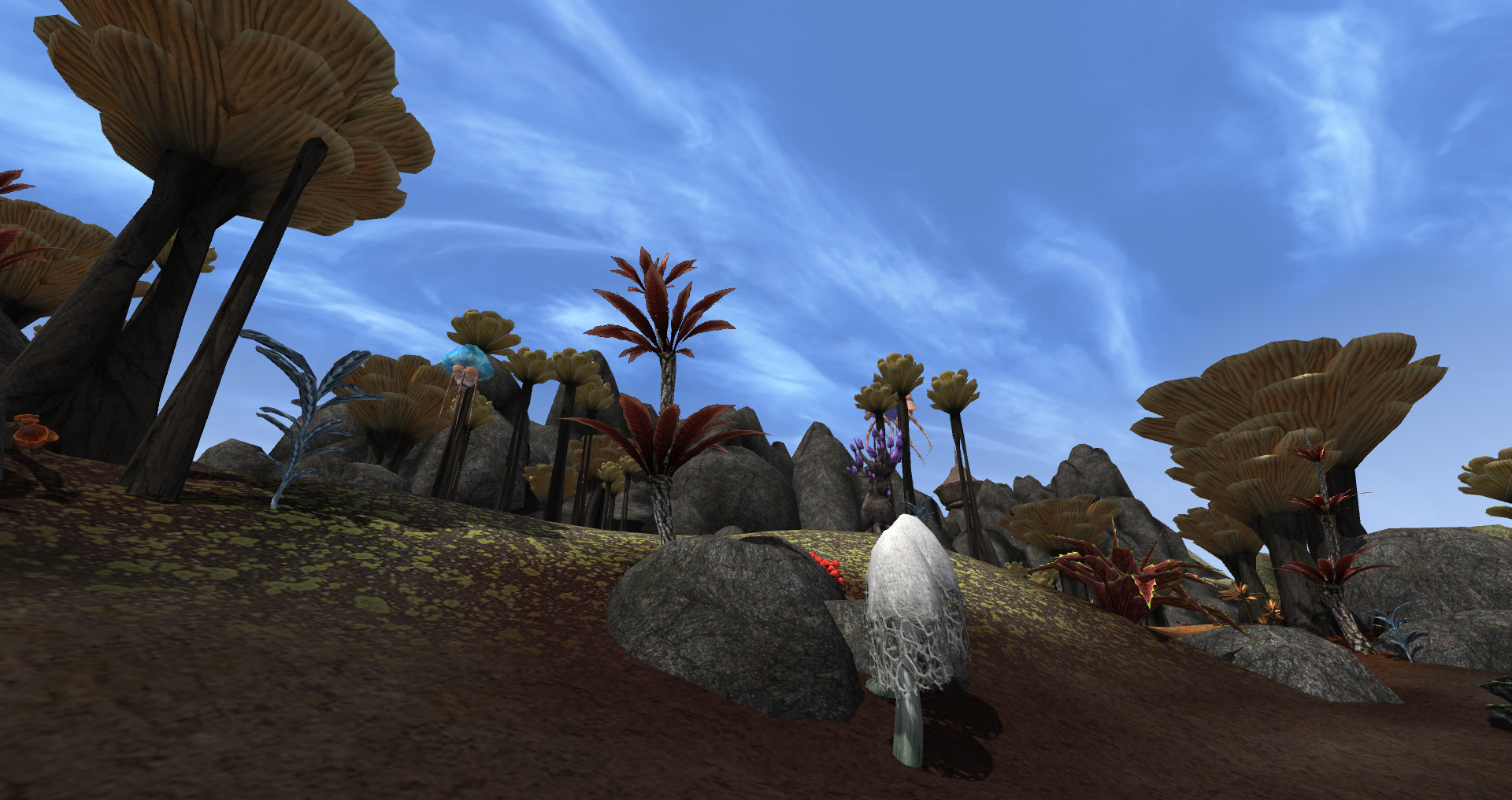 An Othreleth Woods test area showing off some of our new flora assets. A piece of this region will find its way into the Hlan Oek expansion.

In terms of quests, we will use this opportunity to tie up loose ends in our last two expansions. A big focus will be to provide additional content to Almas Thirr, the imposing Temple fortress that was the centerpiece of the Aanthirin expansion, but which currently has very little to offer for non-Temple players. To rectify this, we will use the example of Vivec, another holy Temple city, to implement three Imperial guilds in the western side of the town. The Mages Guild questline will focus on the mysterious Dreugh presence deep under Lake Andaram. In the Fighters Guild, players will instead be enmeshed in the rivalry between houses Hlaalu and Indoril, working jobs to boost the position of one or the other, depending on who's paying. Lastly, the Thieves Guild in Almas Thirr, a barely-tolerated outfit, will play out a conflict with Morrowind's native criminal syndicate, the Camonna Tong, in Hlan Oek. 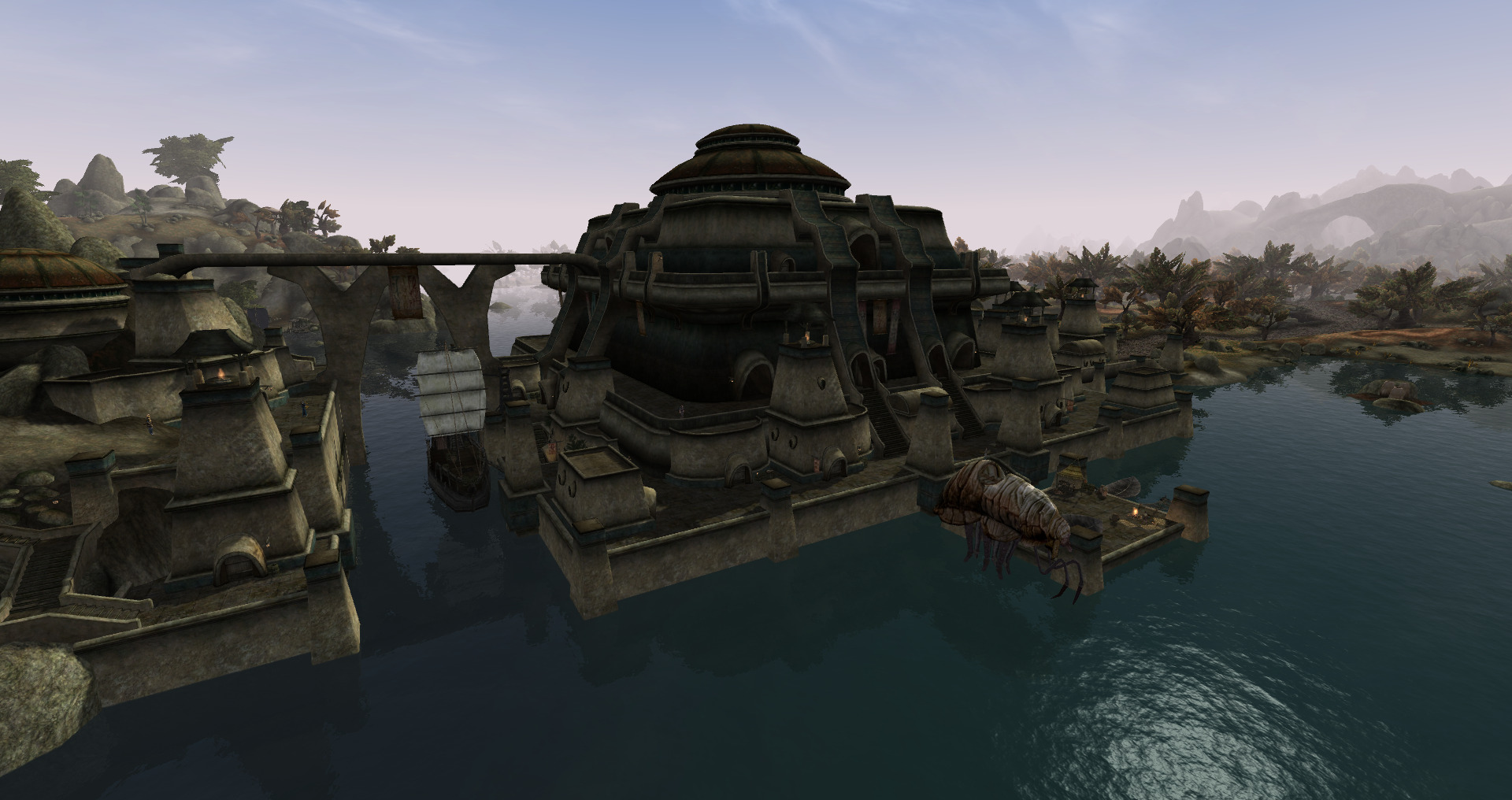 The Temple stronghold of Almas Thirr, where Saint Veloth first crossed the Thirr river. The exterior of the town will be somewhat reshuffled to make room for Imperial guilds, whereas the interior will be refitted to elmininate the infamous "Tardis" effect.

Other added quests, according to current plans, will include a full knightly tournament in Old Ebonheart, as hinted in the existing Imperial Cult questline, with suitable challenges and rewards for worthy entrants. The Morag Tong, too, will receive love -- their Black Hand hall in Roa Dyr on the eastern bank of the Thirr will now have a selection of writs to carry out across Indoril territories. Finally, the town of Hlan Oek itself will likely receive a Tribunal Temple questline, a short Hlaalu questline highlighting the corruption of this Camonna Tong town and a suitable selection of miscellaneous quests open for all players. 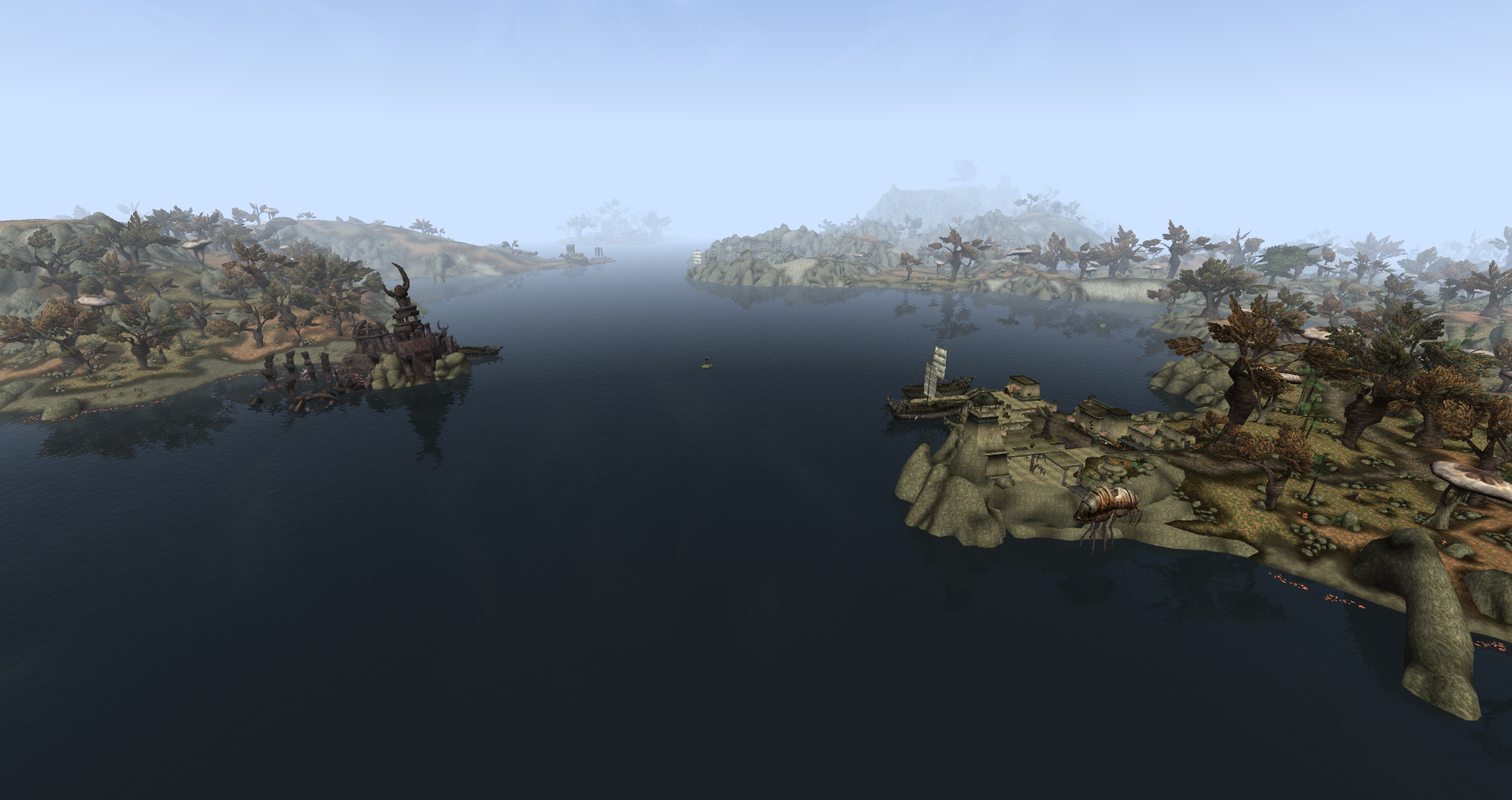 Lake Andaram. What mysteries lurk beneath its tranquil waters?

To make room for the guild locations, this expansion will feature a relatively small-scale touch-up of the Almas Thirr exterior and interior, an item which, too, got cut from the Aanthirin expansion due to time constraints. Furthermore, we hope to include a selection of new dungeons and ruins around Aanthirin in order to bring its content density up to vanilla Morrowind levels and to better show off the history of this densely settled breadbasket region. Finally, the town of Hlan Oek and its surroundings, long included in our TR_preview plugin, has already received a substantial touchup to, on the one hand, better display the centrality of the Temple to this town on the Veloth's path and, on the other hand, to open the town up to the river that is it's lifeblood. Currently, Hlan Oek's interiors are being overhauled to bring them in line with town's strenghtened characterization. 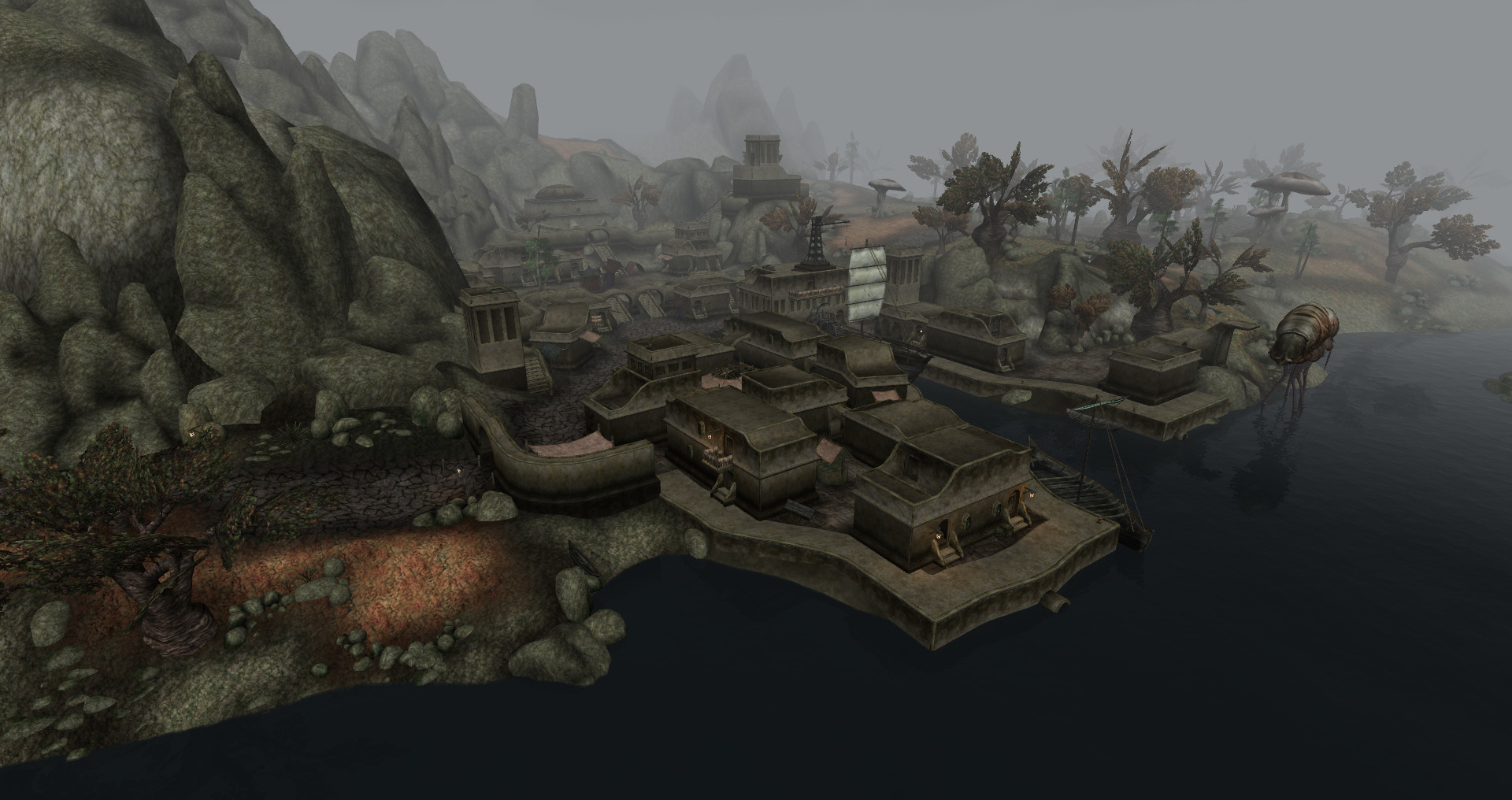 The new Hlan Oek, as designed by Vern. This version places the Tribunal Temple in the center of town, overlooking Veloth's Path. In our lore, it was precisely the subsidised construction of this chapel that allowed the Hlaalu to first gain a foothold in Aanthirin, with the Temple's assent.

Another item to tide players over is the Sundered Scar overhaul/expansion, as revealed last December. Straddling the southeastern coast of the Inner Sea, this region has been released since 2012, but it has always suffered from poor characterization, overly flat terrain, low performance and an almost total lack of quests (it was, after all, among the first parts of Morrowind's mainland to be developed in the early 2000s). With the overhaul, we hope to bring more of the Red Mountain’s influence into what is, in the current execution, a comparatively lush mainland. The area will now become a “failed garden” of the Indoril – a previously prosperous land that for unknown reasons has decayed into a sulfurous volcanic morass. Hardscrabble folk still cling to their ancestral lands, but the Indoril have largely neglected the area. Most importantly, new quests dealing with the various hardships of the region's residents will finally make the area worthwhile for players to explore, making this not only an overhaul of an already-existing area, but a full content expansion in its own right. We hope to embark on this overhaul the moment that the Dominions of Dust and Embers of Empire expansions are released, and to develop it in parallel to the Hlan Oek expansion. 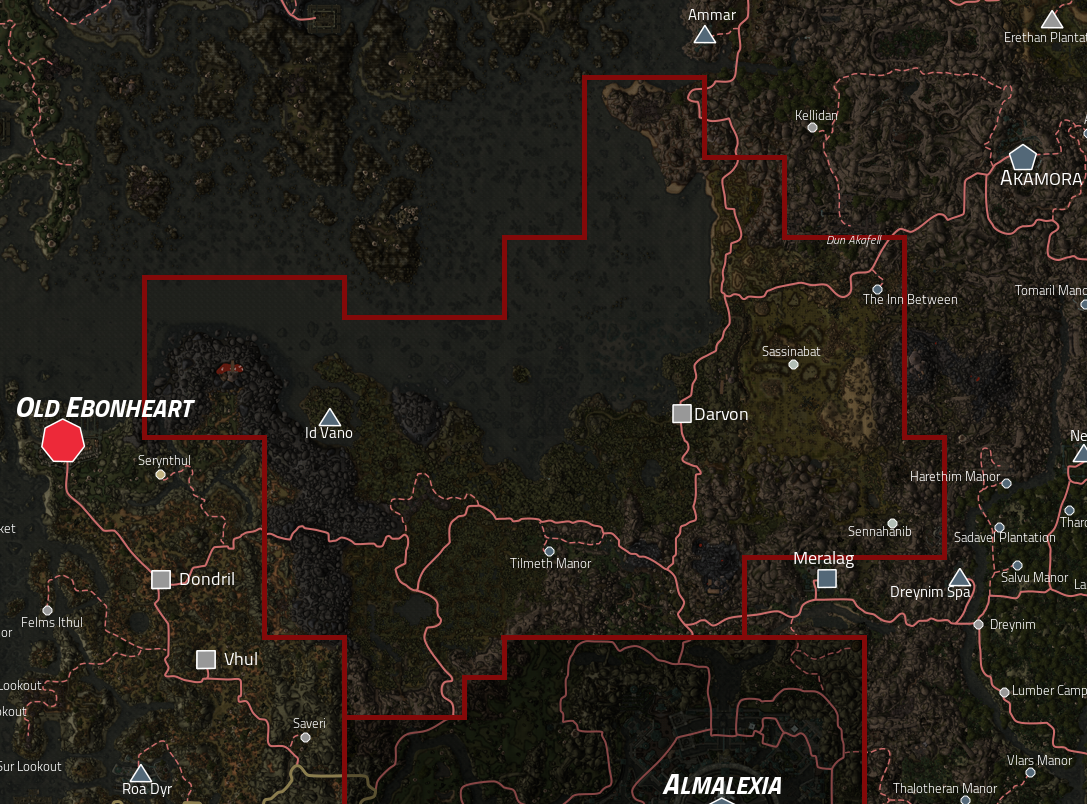 The prospective area to be overhauled in the Sundered Scar expansion. 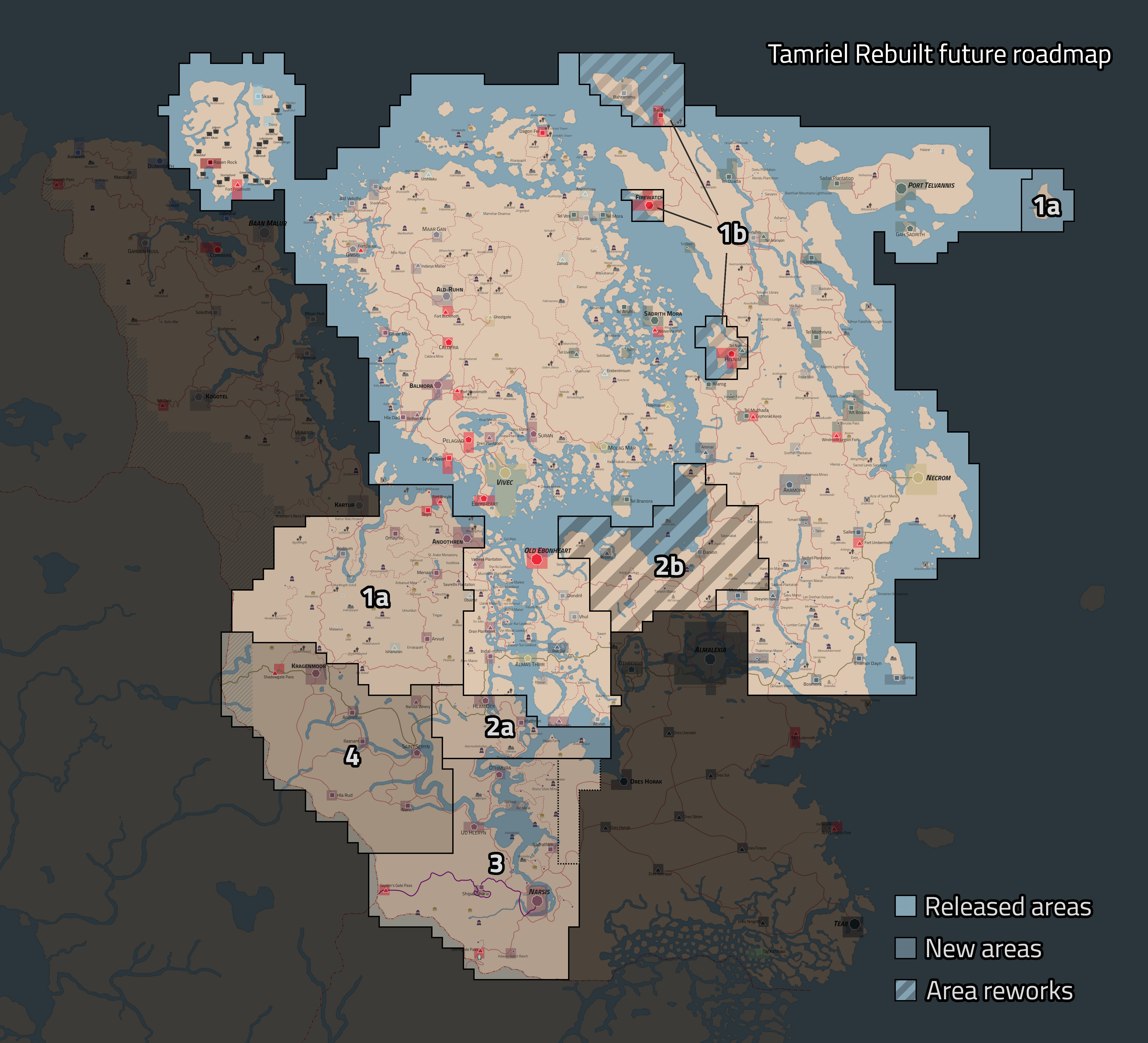 In the meanwhile, our team is busy finishing the quests and exterior touch-ups for the Dominions of Dust expansion and polishing the final interiors for the Embers of Empire expansion. In a huge milestone, the last critical interiors for the Embers of Empire release have been finished, reviewed, and merged into our in-development plugin (some optional in-progress ones may still be included, if time permits). In addition, the first questline for Embers of Empire has been finished, whereas designs for all others have now solidified. Only the last few NPCs remain to be placed before the (re)implementation of old and new quests can begin in Imperial Telvannis! Finally, quest work for Dominions of Dust is coming along quite well, too, with several quest claims being successfully reviewed in the past weeks. Still, we can’t predict any meaningful release dates for our volunteer-only project. 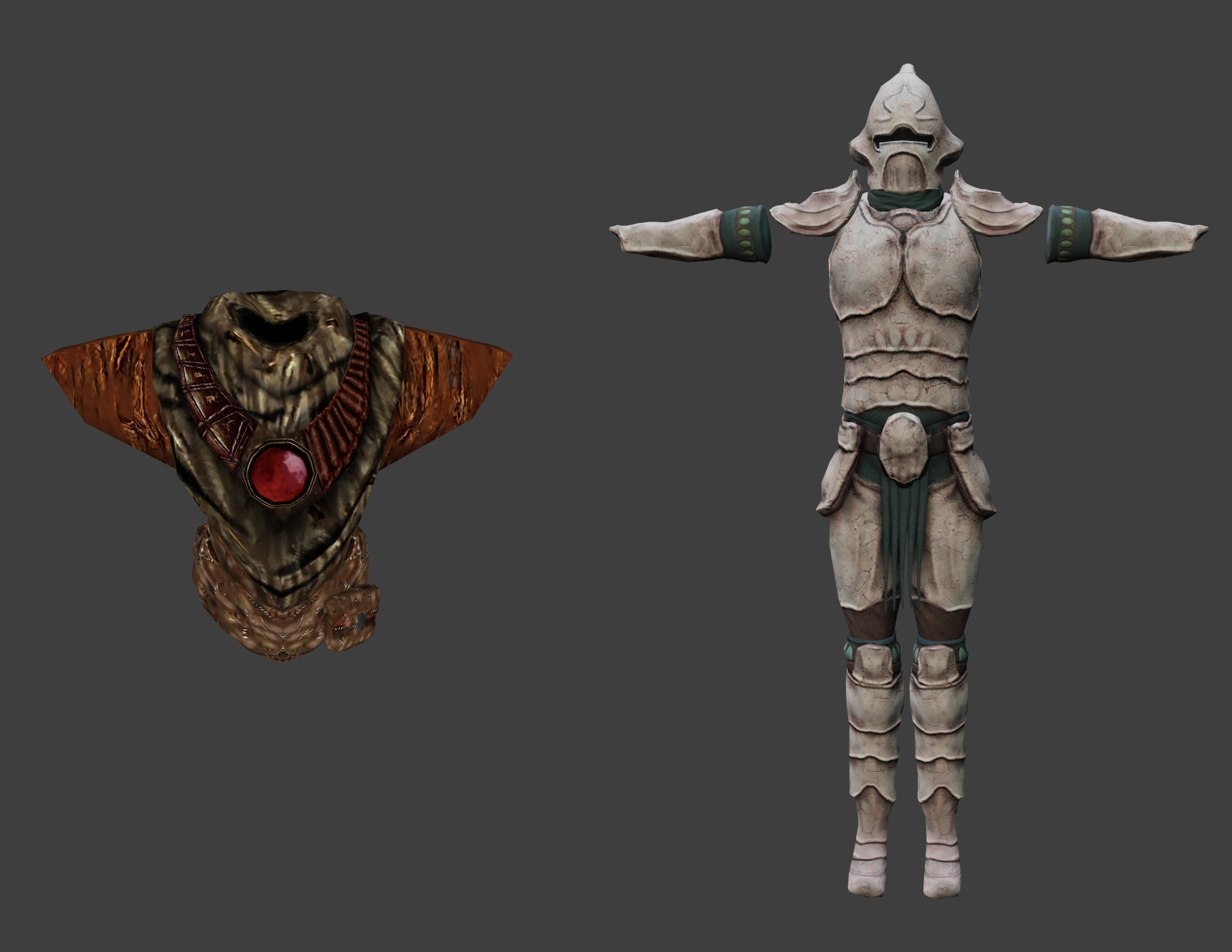 Very recent work-in-progress armors for our upcoming expansions: Morag Tong armor from Morrowind concept art by S'wit (left) and Shellmold armor by PulcharmSolis (right). The latter was made for our sister project, Padomaic Isles, but will also feature in the Cathnoquey mission in Firewatch, once we release the Embers of Empire expansion.

To gain more insight into our project, come chat with us on our Discord server, where we develop the mod in the open. And why not consider joining our development team to help bring these lands to life earlier?

I count days to relase!