Welcome to another development diary for Tamriel Rebuilt -- the massive mod for TES III: Morrowind that adds the mainland of the Morrowind province to the game world, in accordance with the lore and vision of TES III. Currently, over 50% of the mainland area, along with roughly 360 quests, is fully completed and released to players.

Last month, we updated you on our next major content and landmass expansion, the Dominions of Dust. However, as we teased then, the areas featured in that upcoming release are far from the only ones being worked on currently by the Tamriel Rebuilt team. This time, we’d like to introduce you to yet another substantial content expansion, developed in parallel, that we are calling Embers of Empire. This release will, however, be a little different -- instead of bringing to life brand-new areas, like Dominions of Dust, EoE will instead be a massive overhaul of some of our earliest released content -- the Imperial presence in Telvannis. 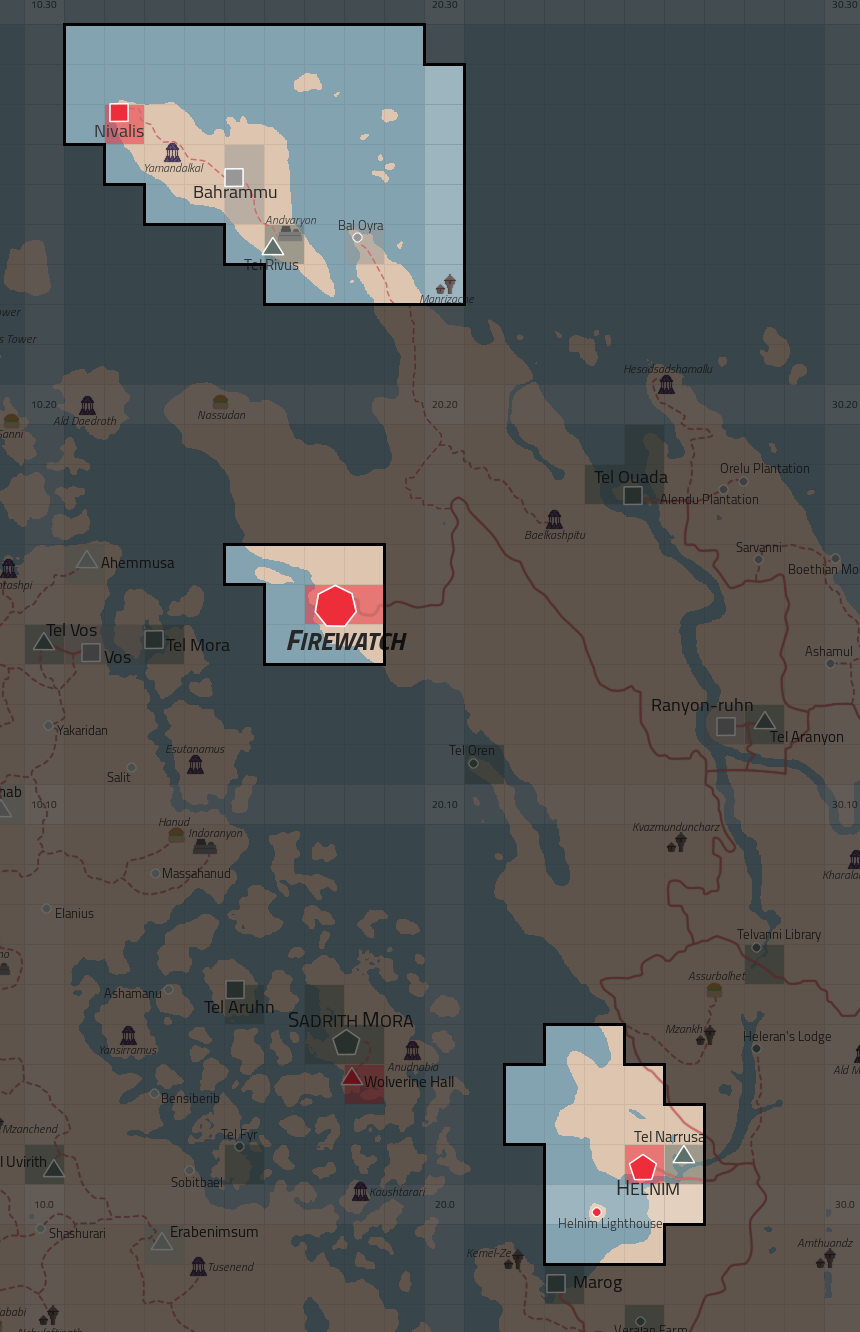 The areas of Tamriel Rebuilt touched by Embers of Empire.

As you can see on the above map, EoE will include a near-total overhaul of the city of Firewatch, initially released in 2006, as well as the town of Helnim, first available to the public in 2008. Included in the expansion will also be a major update to the island of Althoa (formerly Balvvarden) and the hamlet of Bal Oyra. But why even revisit these areas? Have they not been done for decades already? Why not direct this effort to new lands? Let's dive into the motivations here.

Tamriel Rebuilt is nearly two decades old and has been in constant evolution through all this time. Volunteers have come and gone, bringing ever-improving quality and aesthetic standards. In the early to mid 2000s, Tamriel Rebuilt developers made the hugely successful effort of conceptualizing and building the eastern district of Telvannis. Players have been able to enjoy the fruits of their work for the past decade and a half. These developers, however, were greatly hampered by the then-lack of affordable 3D modelling software and by the burden of developing their mod at a time and in a community that was largely preoccupied with probing the more -- uh -- eclectic aesthetic possibilities of TES III modding.

Hence, there is a large offset between the aspirations of these early modders and the current iteration of the mod team. Since at least the major reorganization in 2014-2016 there has been a strong and increasing emphasis on custom 3D assets on the one hand, and exterior/interior design more aligned with vanilla principles and lore on the other hand.

The matter of Firewatch and Helnim came to a head when one of our developers, Taniquetil, tried to draw a new version of the in-game Firewatch map. Finding that the sparse and overly rectangular nature of Firewatch was the main obstacle to having the map look good, she decided to take matters into her own hands. 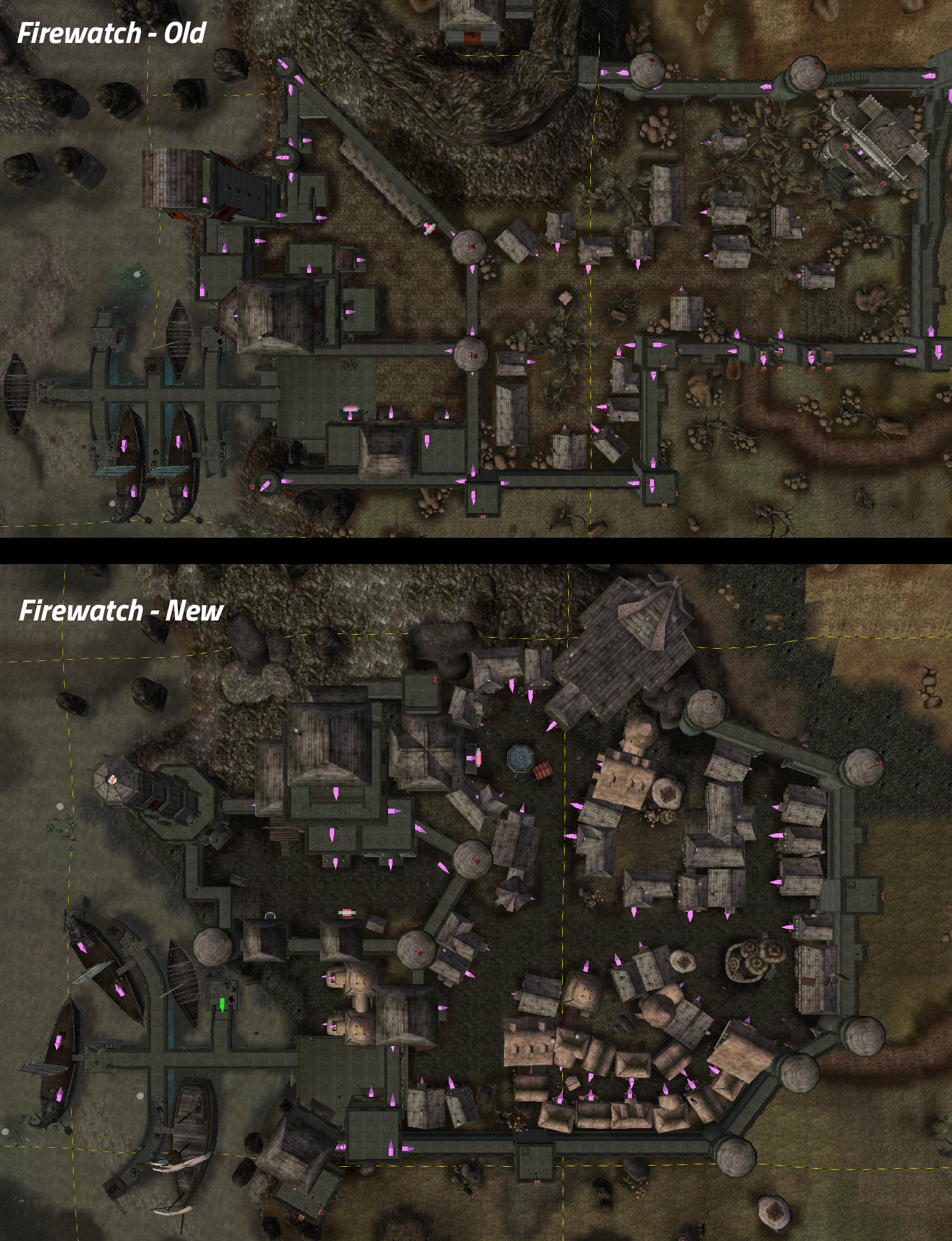 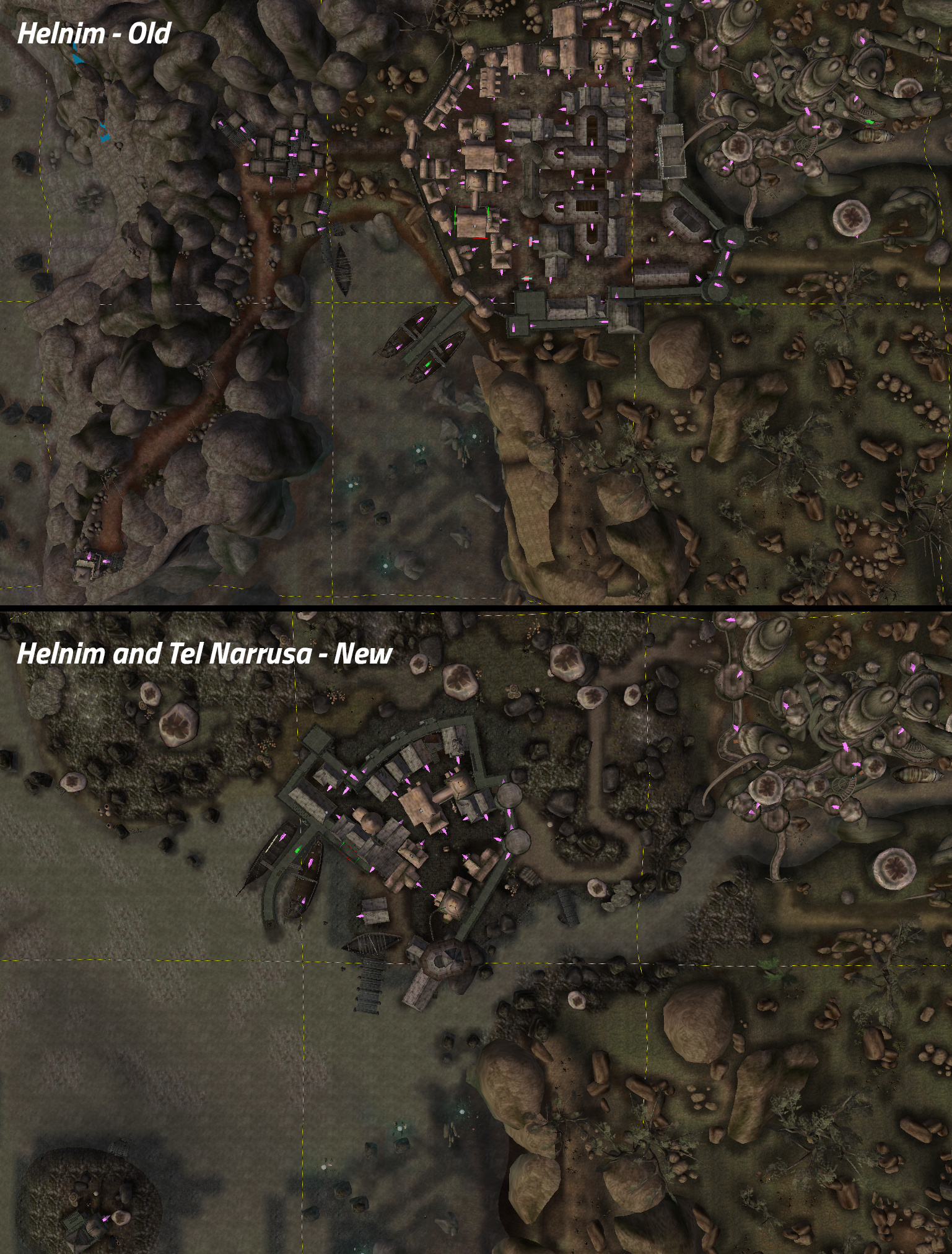 ...and the same for Helnim.

The old versions of Firewatch and Helnim have, in fact, been one of the main bugbears to newer Tamriel Rebuilt developers. Currently, Firewatch, a major district capital in TESI: Arena, is only a small and sparsely filled town by TES III standards. Its Mages Guild is tucked in a cellar of the palace building, abutting the kitchens. Furthermore, the lighthouse is “kitbashed” from 3D assets that clearly weren’t originally designed to be used as such.

Conversely, the town of Helnim, supposedly a much less important port, had in a development accident hugely outgrown its design size, outranking Firewatch by far in quest and interior count. Its design was difficult to navigate and its conceptualization -- including its internal rivalries and the relationship with the Telvanni -- was hazy. Together with the overly large imperial town of Bal Oyra to the north, this meant that Telvannis district had the largest and most conspicuous Imperial presence of any of the Morrowind districts -- directly in conflict with vanilla TES III lore that labeled House Telvanni among the most xenophobic.

Hence, as a side-project to his many contributions to the Dominions of Dust release, Taniquetil has spearheaded a project to bring these imperial outposts more in line with current standards and established lore. Together with many other asset, interior, and exterior developers, several new unique buildings have been added and old ones reworked or reshuffled. Let’s go through some of the main changes. 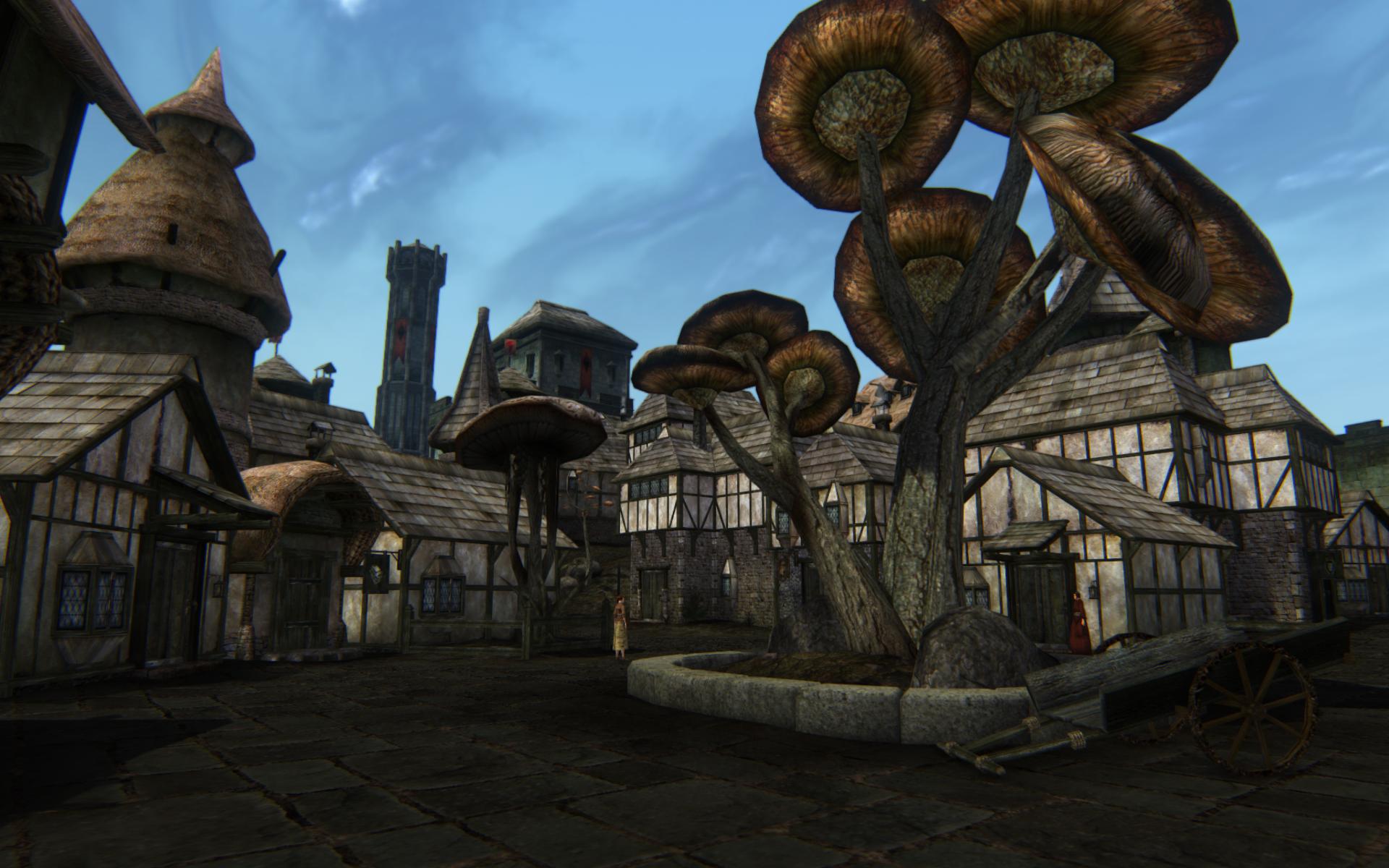 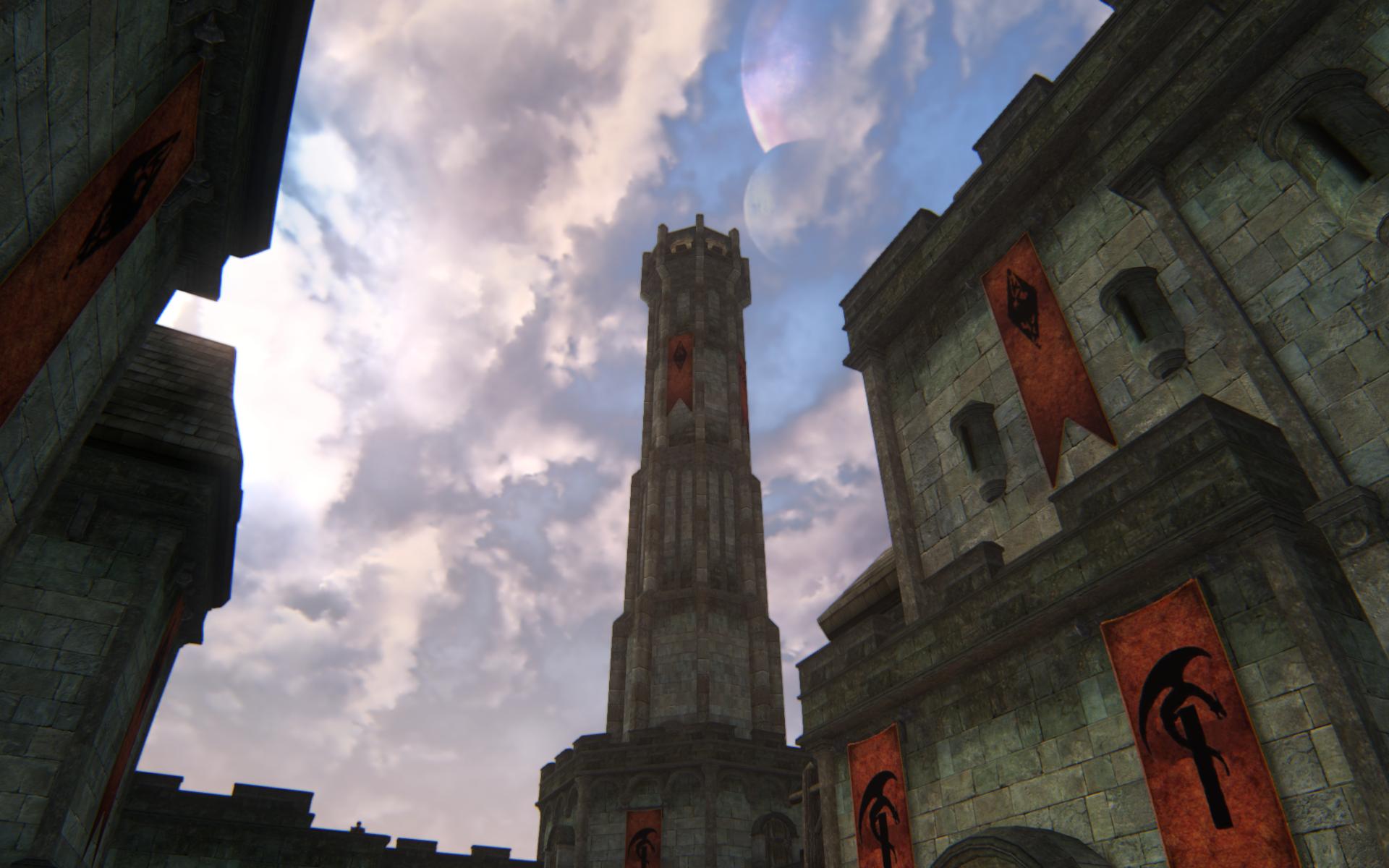 The Drakelight Beacon stands vigil over the entrance to the Inner Sea.

Firewatch, the seat of Jandacia, Duchess of Telvannis, has grown while simultaneously shrinking. How? It has received a large portion of the interiors and characters that used to populate the overgrown Helnim, yet these have been gathered within redesigned city walls which now take up two, instead of the previous four in-game exterior cells. The resulting cityscape is packed with buildings and populace and sells the idea of a besieged district capital in one of the most hostile parts of the Empire. 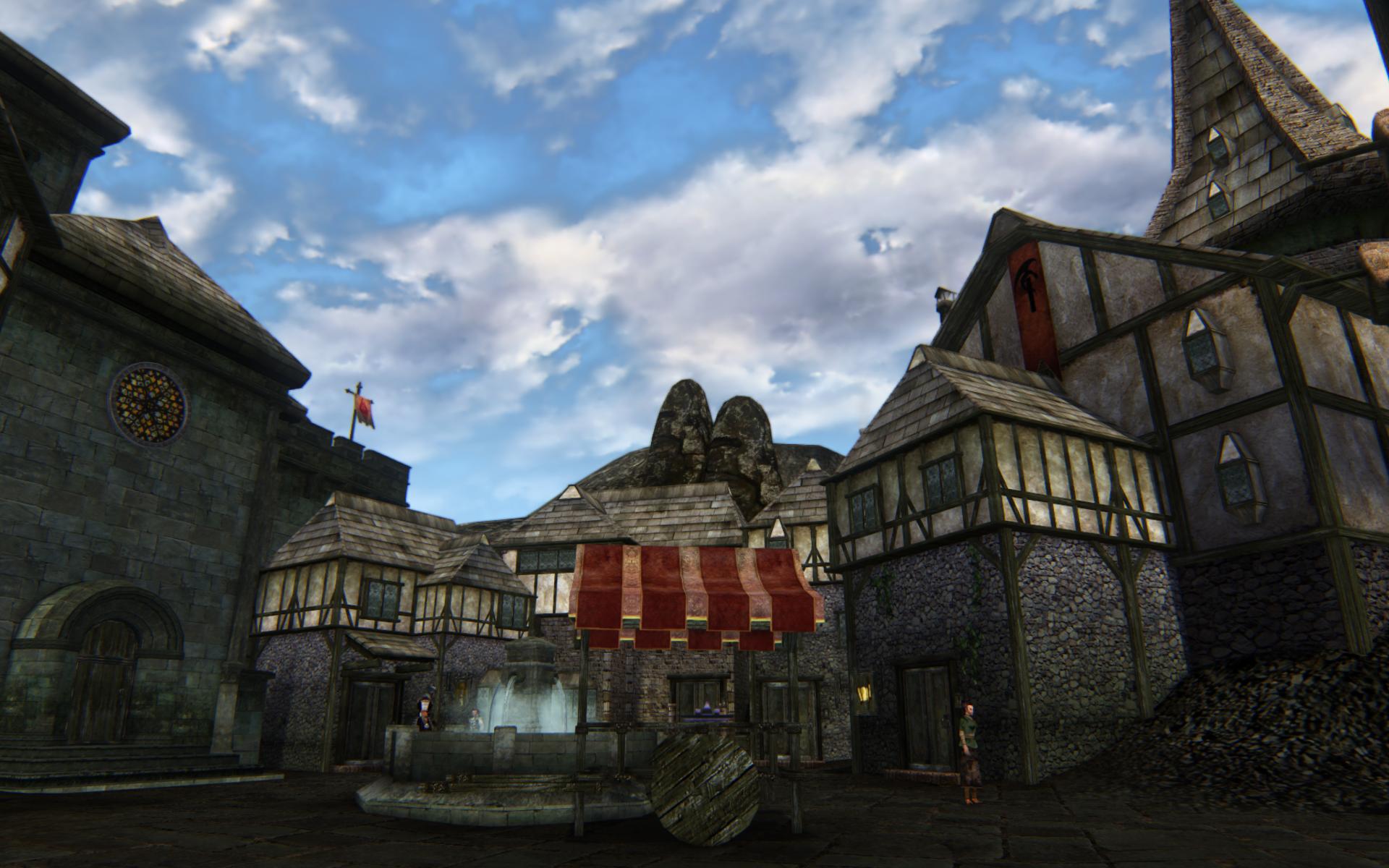 The wealthy Vaynth District hosts the Temple of Akatosh as well as the College of Firewatch. 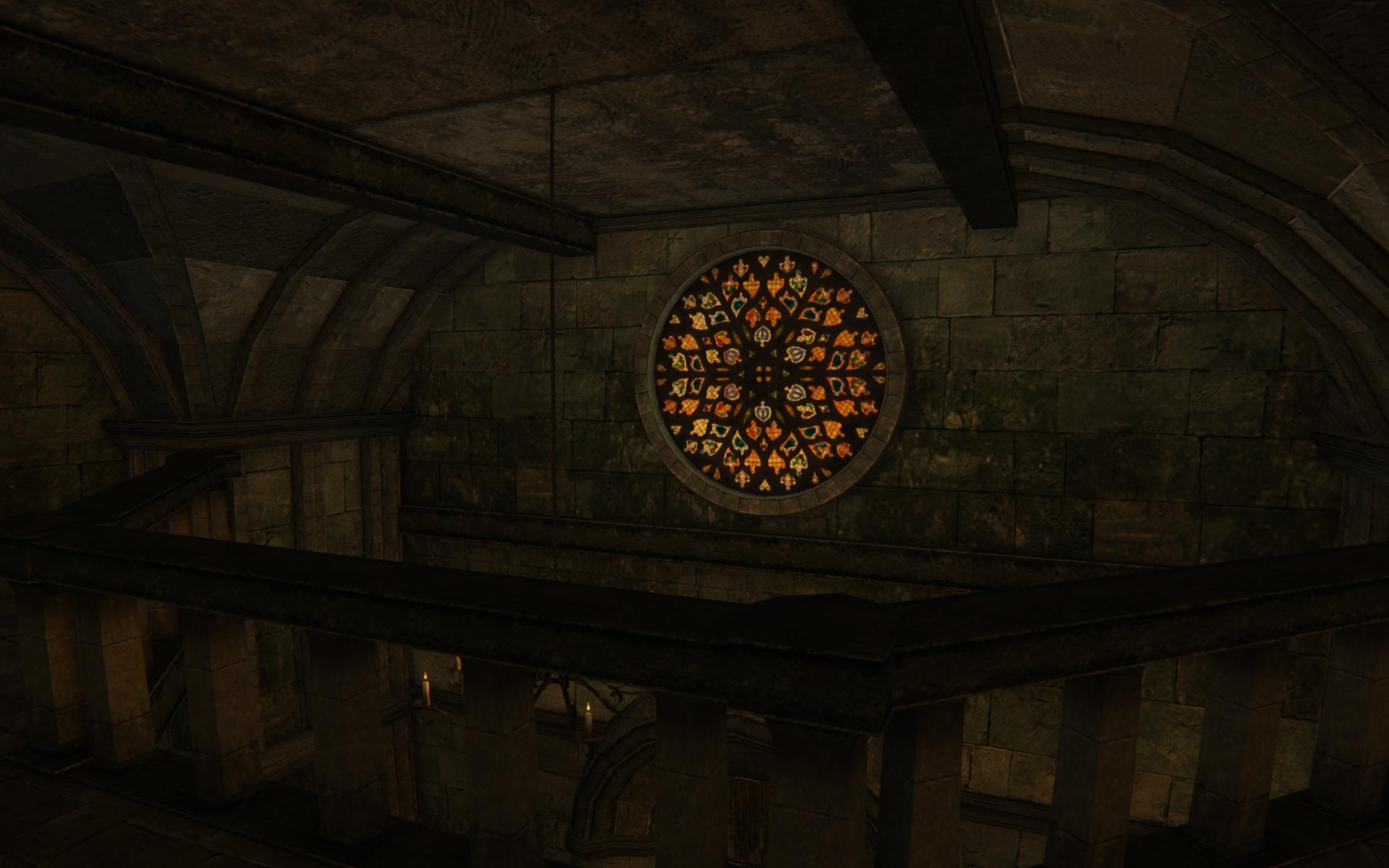 Inside the Temple of Akatosh.

Among specific changes, the legion bastion has been replaced with a distinct Imperial Navy HQ and a separate new Legion garrison: Fort Dustmoth. The Mages and Fighters guilds have received buildings of their own, and Duchess Jandacia’s palace -- now dubbed Ember Keep -- has received an overhaul to make it properly regal. Many unique buildings have been added as well: the iconic lighthouse now has an eight-sided design, and the old Firewatch Library has been transformed into a full College of Firewatch, drawing scholars from across the Empire. 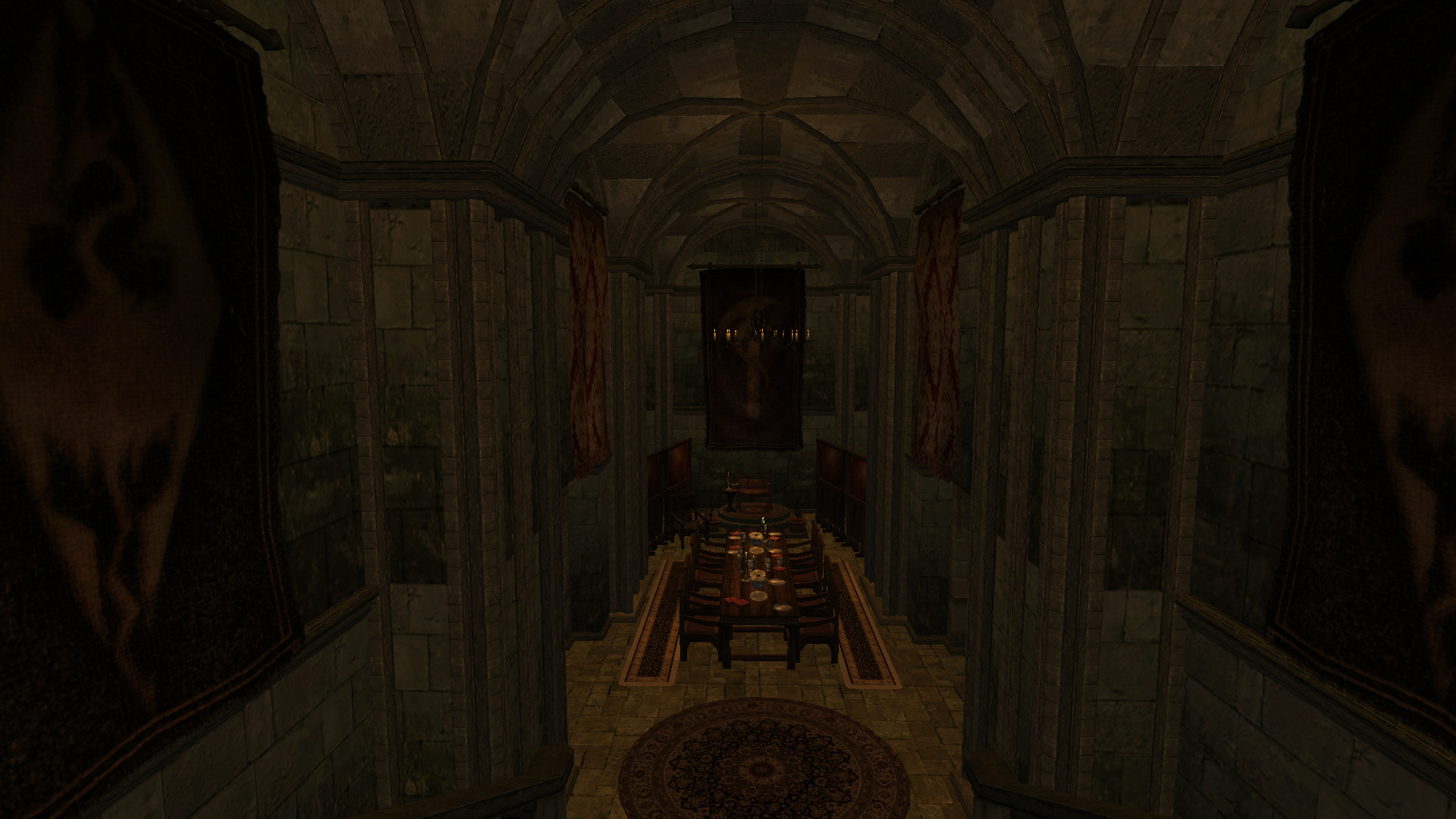 The great hall of the Ember Keep. 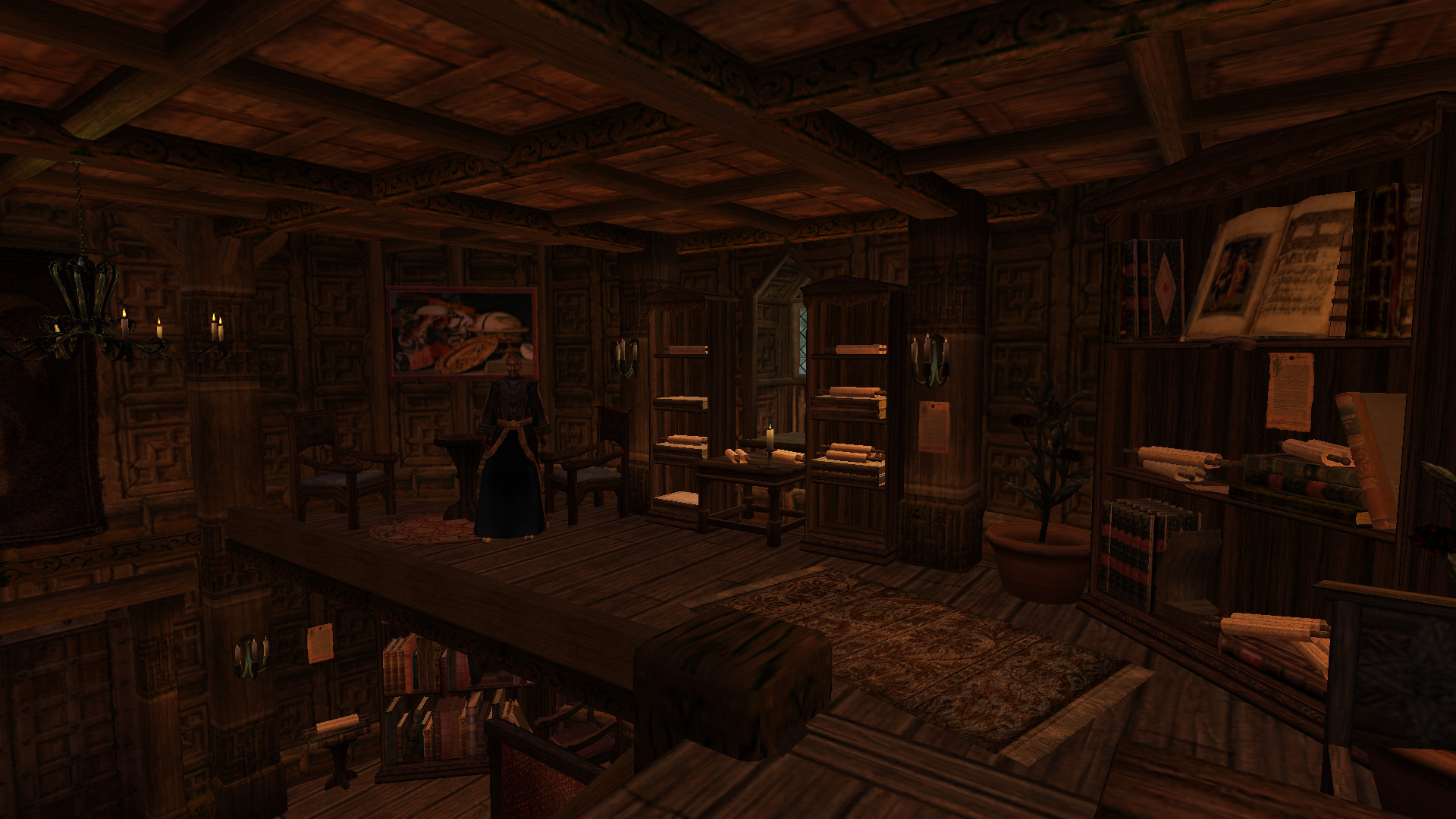 The library of the Firewatch College.

We have also made drastic changes to Helnim. What used to be an overgrown and confused double-city with both an imperial and Telvanni side is now two distinct locations. On the coast is Helnim: a compact trading town established by the Zarfibel Bay Company (not to be confused with its competitor, the East Empire Company) to exploit the lucrative trade in Bug Musk, kwama, and other non-proscribed goods of the Telvanni East. The Telvanni town of Tel Narrusa is now properly separate, though largely unchanged -- the relative willingness by its ruling lord to trade with outlanders is the reason for Helnim’s existence. 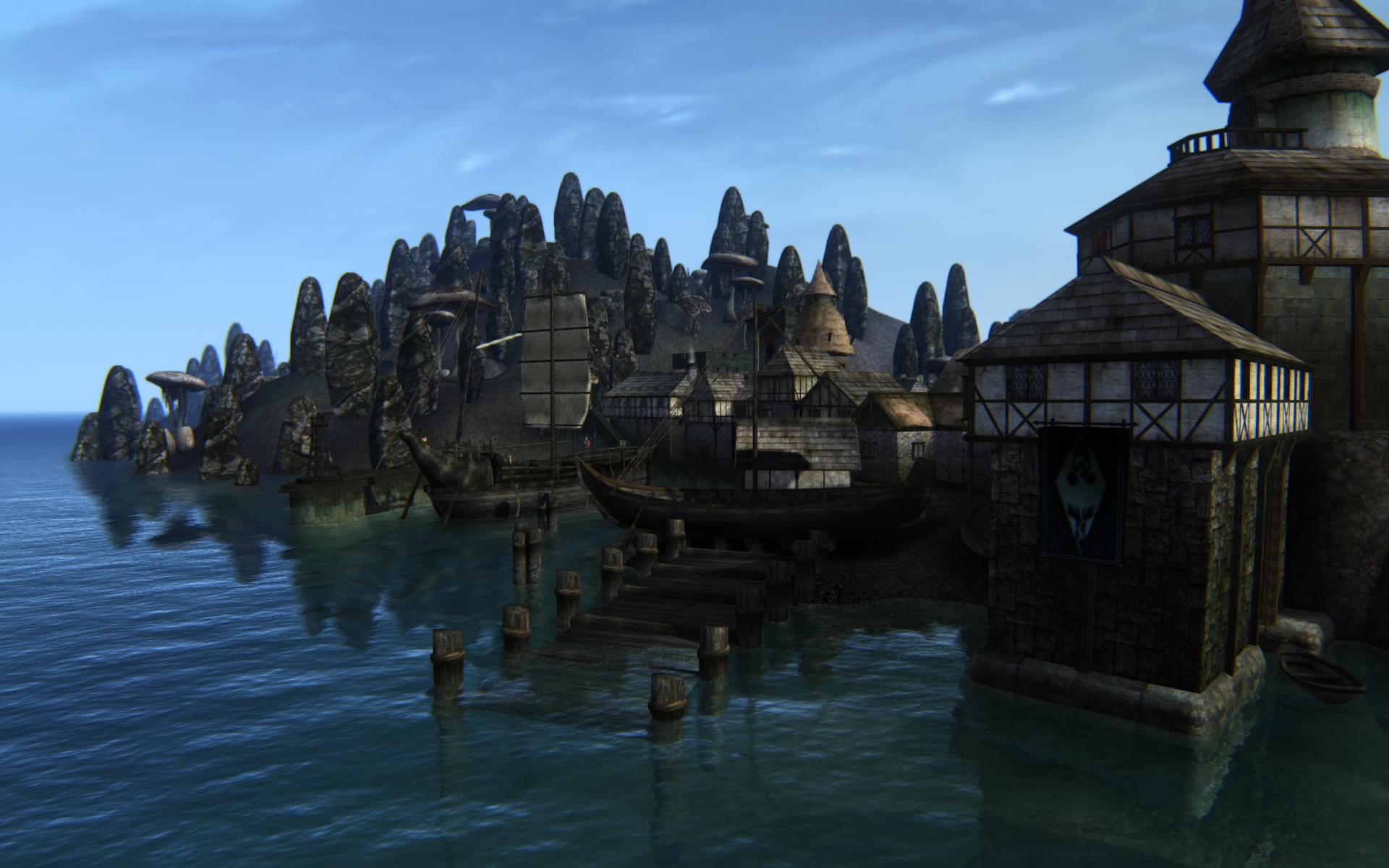 The new Helnim, dominated by the Zarfibel Bay Company headquarters to the right of the picture. 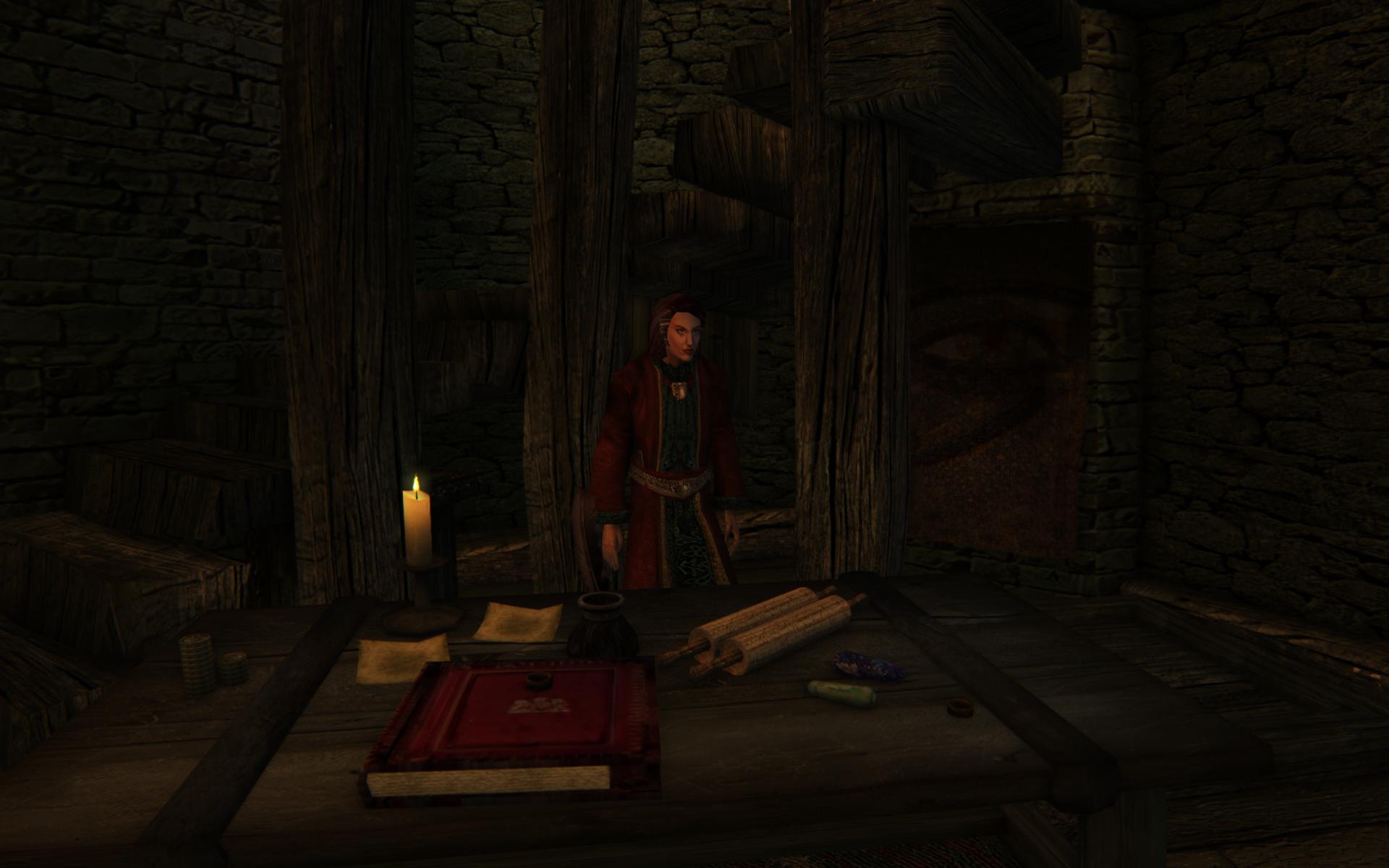 Though having lost much of its population to Firewatch, Helnim now boasts a small Mages Guild of its own.

The northern town of Bal Oyra has also received major changes. The once large and out-of-place imperial town has been reduced to only a small Dunmer shack village, so as not to overwhelm hostile Telvannis with Imperial presence. Instead, most of former Bal Oyra’s Imperial buildings have been transferred northward to a new settlement on the remote island of Althoa. 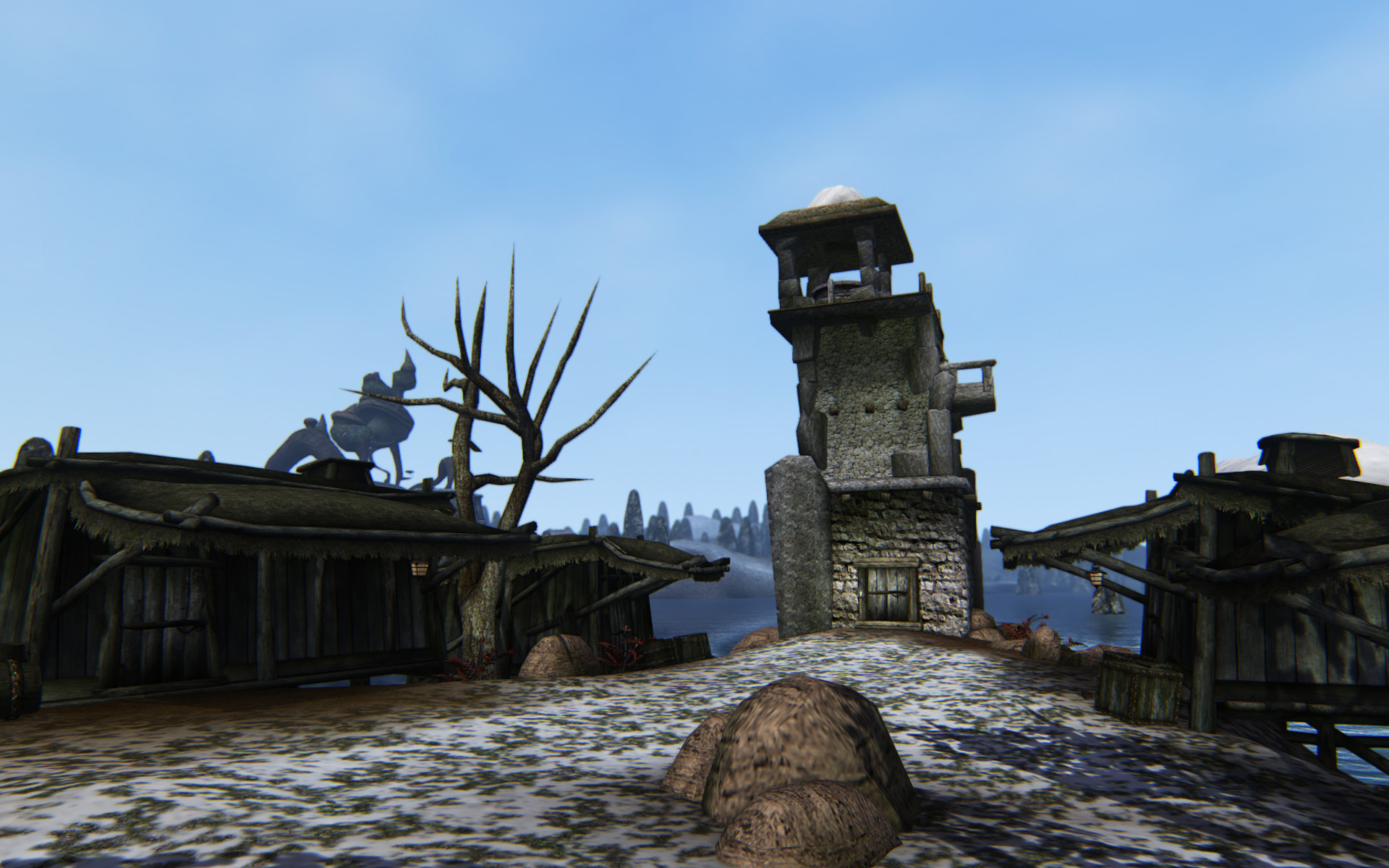 Bal Oyra in its reduced form; the island of Althoa looms in the background.

Althoa, now covered in snow, is host to the Imperial Navy outpost of Icebreaker Keep, a crumbling sea fortress perched at the isle’s northernmost tip. The fort’s walls enclose Nivalis, a chilly settlement home to current and retired Navy sailors living within the Keep’s decrepit courtyard. This fort is the last functioning remnant of the Empire’s eastern network of naval shieldforts, which were built to guard against Akaviri counterattack in the years following Uriel V’s failed invasion of the Uttermost East. 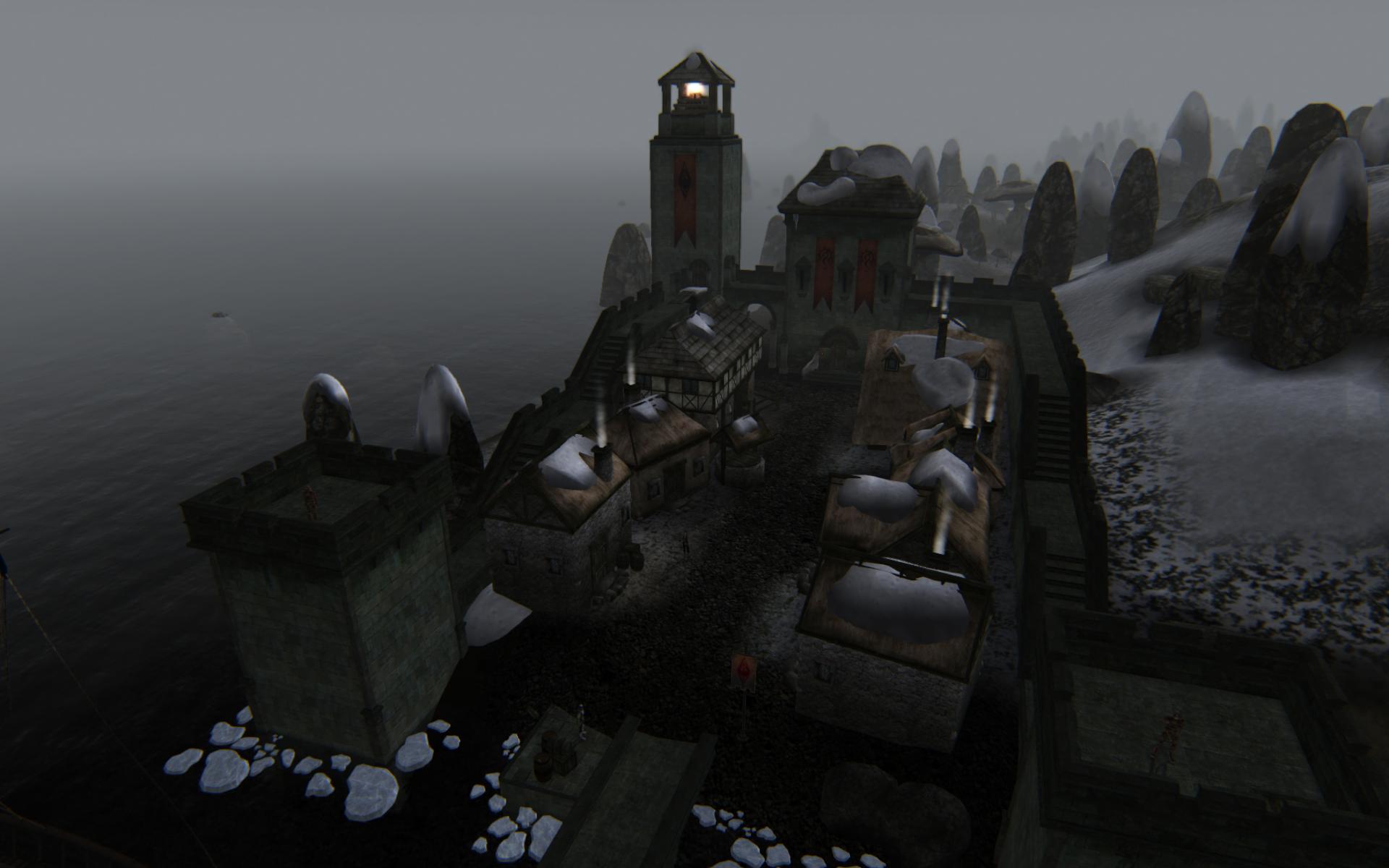 Icebreaker keep, enclosing the hamlet of Nivalis. This is not the most glamorous of Navy postings.

Lastly, the Telvanni themselves have also received a bit of love. Standing guard over the two Dunmer villages of Bahrammu and Bal Oyra is the new Tel Rivus, a Telvanni tower grown from the ancient Chimer stronghold of Andvaryon. 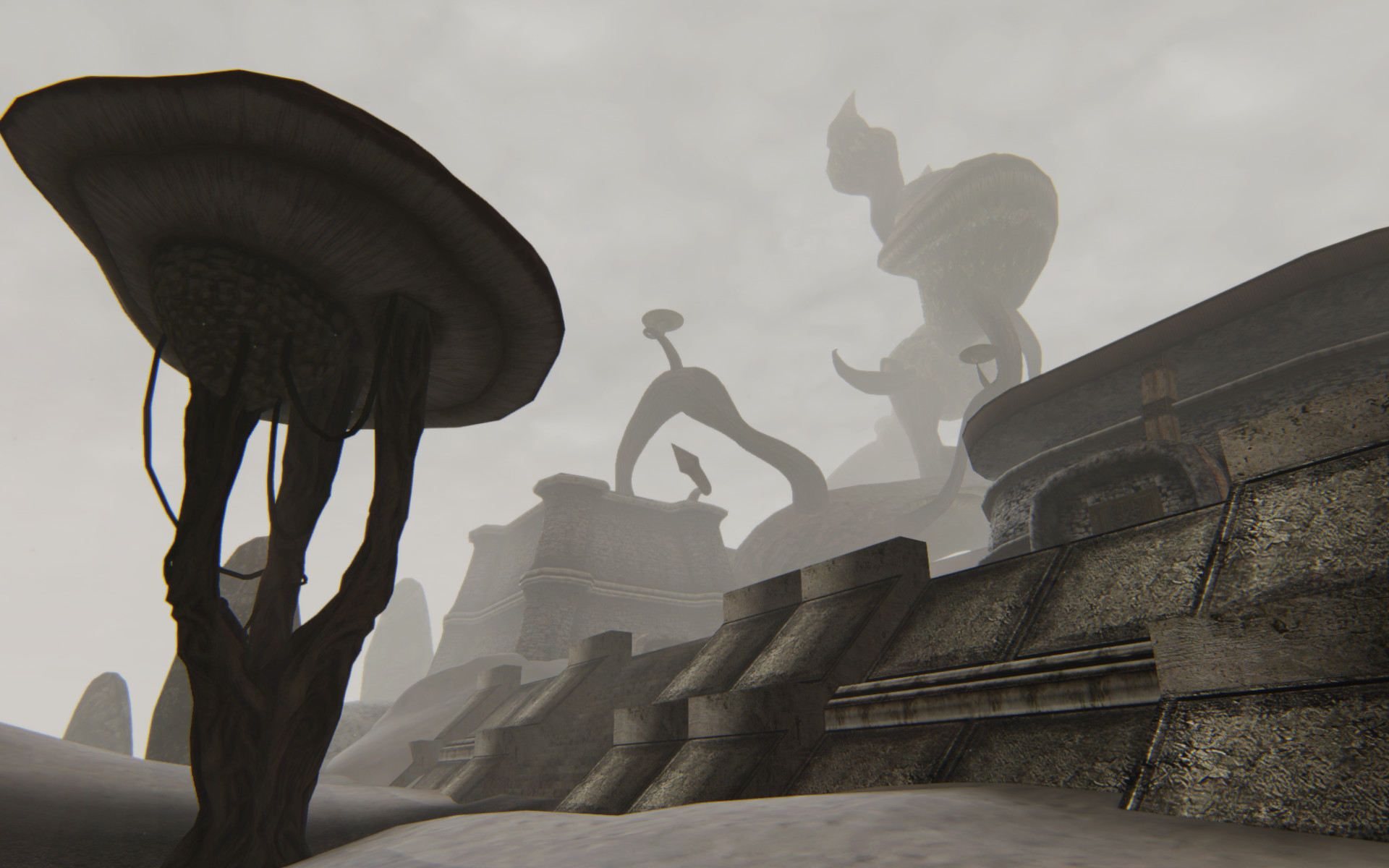 What makes the development of Embers of Empire possible in parallel with our usual content is that it doesn’t require many new quests. Instead, the generally well-made quests found in old Firewatch, Helnim, and Bal Oyra will be -- for the most part -- reworked as necessary and retained, though sometimes in a different location. The Helnim Thieves Guild will see a more major rework, given the deprecation of the old Helnim militia, and some new miscellaneous quests will be added to fill in new locations like the College of Firewatch and Tel Rivus.

At this stage, Embers of Empire is progressing at rapid pace. The exteriors of the new and overhauled towns have already been finalized. Almost every interior cell in the EoE project area has been reworked to meet modern standards of shell-matching and style consistency, and to generally be more interesting -- just a few of these still remain in the works. Complete interiors have already received their NPCs and only the reimplementation of the quests and dialogue remains. Depending on upcoming progress, we may release EoE either before Dominions of Dust, or simultaneously.

For even more details on Embers of Empire, be sure to check out the wonderful screenshot tour by Taniquetil.

Though our main focus will always be in developing as-of-yet unreleased areas of Morrowind, this will not be the last reworking of our earlier content in the longer perspective -- there are other areas in Telvannis and the Indoril heartlands that could do with some sprucing up. Tune in next time for a longer-term roadmap, where we discuss our future content releases following Dominions of Dust and Embers of Empire. In the meanwhile, we are always looking for developers to help create the 3D and sound assets, as well as the exteriors, interiors, and questlines required for our next releases, or to help playtest the quests and worldspaces already implemented. Playtesting and interior creation in particular are tasks that don’t require special skills, but are sorely needed. Becoming a Tamriel Rebuilt developer is easy for anyone -- to join, come ask on the Tamriel Rebuilt Discord server!

Love the new cityscape of Firewatch and Helnim. You did it right. EoE is the proof that the oldest parts of TR need to be modernized (despite the prodigious amount of work, time and passion already put into it). Thanks for this update and good luck to you.

Sad to see the once mighty Bal Oyra reduced to a few shacks, I always thought the peninsula town was quite striking

I don't think that helnim and bal oyra need any changes,

i agree with the firewatch and Bahrammu changes though

They did need changes. Very much so. And it's already been done.